Jerry Auger has never had trouble competing. Beginning as a Sheridan business student and varsity athlete, he translated his never say never attitude into a winning record both in the business world and on the playing field.

Auger has owned and operated six restaurants in Guelph, Cambridge and Kitchener, Ontario including East Side Marios, Fionn MacCools Irish Pub and Casey’s Grill and Bar. His East Side Marios in Guelph has been the most successful franchise of the restaurant in Canada for an incredible 17 years running. A consistent top performer, Auger has been named Canada’s Franchisee of the Year three times and received Prime Restaurants President’s Award nine times in 11 years.

The foundation of such success can be attributed to his ongoing innovative spirit which he demonstrated in the renovation of his 2012 Fionn MacCools outlet which saw the installation of controlled self-pour taps, a rare sight in Canadian pubs. “If you aren’t willing to try something new, to differentiate yourself, you won’t progress,” explains Auger.

A lifelong entrepreneurial spirit and love of sports led him to study business at Sheridan following Centennial High School in Guelph. Perfecting his time management skills early on, Auger balanced studies, varsity athletics and a part-time job, graduating with enough money to buy a car.

An exceptional basketball player, Auger was inducted into Sheridan’s Athletic Hall of Fame in 2014. He was part of the Bruins team that won the OCAA bronze medal in 1978, when Auger was named a tournament all-star.

His Sheridan experience left an indelible mark on Auger. “I didn’t know a soul when I came to Sheridan. Dick Ruschiensky (former men’s basketball head coach) was like a second father to me. I don’t know what I would have done without basketball.”

Building on that foundation, Auger has gone on to contribute much to the athletic profile of his community. As a nationally certified level 3 basketball coach, he has guided high school and rep basketball teams to provincial and national acclaim. He created the Guelph Water Polo Club and helped establish the Guelph Youth Basketball Association.

It has always been important to for Auger to follow his interests, both professionally and personally.
“In addition to sports, I love to cook and am marketing driven so the restaurant business was ideal for me,” says Auger who opened his first restaurant with his wife Sue in 1993.

But passion for a project can take you only so far, according to Auger. “The best entrepreneurs have the vision and drive to make that vision work. They play to their strengths and hire the right people to look after the managerial details.”

To this end, Auger has groomed three partners who have been with him since the beginning to manage operations. But it’s not likely he will step away completely. “I love business overall, not just the restaurant business. It’s very challenging. Maybe that’s the athlete coming out in me.” 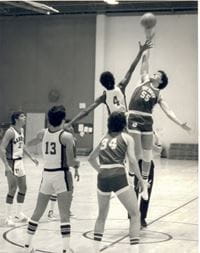 Jerry Auger in action for the Bruins, 1978