Mark Zelinski has spent over 35 years photographing people and places all over the world and now many of his images are returning to the countries he visited. Through his company From the Heart Publishing, Mark is donating 7,000 copies of his photography books — Untitled, One Small Flame and From the Field — to international children’s charities. The three compelling editions capture life in more than 70 countries on seven continents. The Canadian Red Cross, SOS Children's Villages, UNICEF, Free the Children, Seeds of Hope and Rotary Club International are among the charities receiving the books.

Mark has already sent over 4,000 books overseas using funds he raised selling the books throughout Canada over the past year. The books are now being used by orphanage schools in India, Indonesia, Cambodia, Haiti and Lesotho, as well libraries in Ethiopia. International children’s charities also sell the books in Canada to raise funds for work abroad.

The success of this initiative in a relatively short time is very gratifying, says Mark. “I think we need to see the human race as a family and it’s exciting for me to use my photography books as a gift for children and a tool for charities to help people every day around the world. I’ve seen many societies that lack the basics that we take for granted and children are always the most vulnerable.”

A native of Oakville, Ontario, Mark threw himself into this latest labour of love with an impressive list of artistic accomplishments behind him in both the corporate and non-profit sectors. Since 1980 he has created award-winning work for leading Canadian corporations, government agencies and sports organizations, including the Toronto Blue Jays and the PGA Tour in Canada. From 1982 to 1988 Mark was the official photographer of visiting heads of state for the Ministry of Intergovernmental Affairs and The Premier of Ontario's Office. Margaret Thatcher, Francois Mitterand, The Aga Kahn, and Bishop Desmond Tutu are among his photographed subjects.

Among Mark’s fans is federal MP for Papineau, Justin Trudeau. A strong supporter of Canadian youth volunteer work, he wrote the foreward to Mark’s book One Small Flame about educator Kurt Hahn who helped found the Outward Bound organization.

A long-time painter and filmmaker, Mark became interested in photography during his studies at the Ontario College of Art. He graduated in 1979 as the college’s top student that year, winning the Governor General’s Medal and several scholarships. 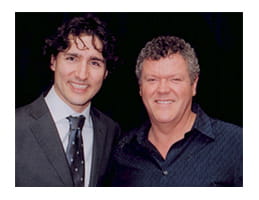 Mark Zelinski (right) with Justin Trudeau, MP for Papineau, who has joined Mark in his book tour for children`s charities.