Content Warning: This production references and depicts racism, discrimination and violence towards Black and Indigenous people. 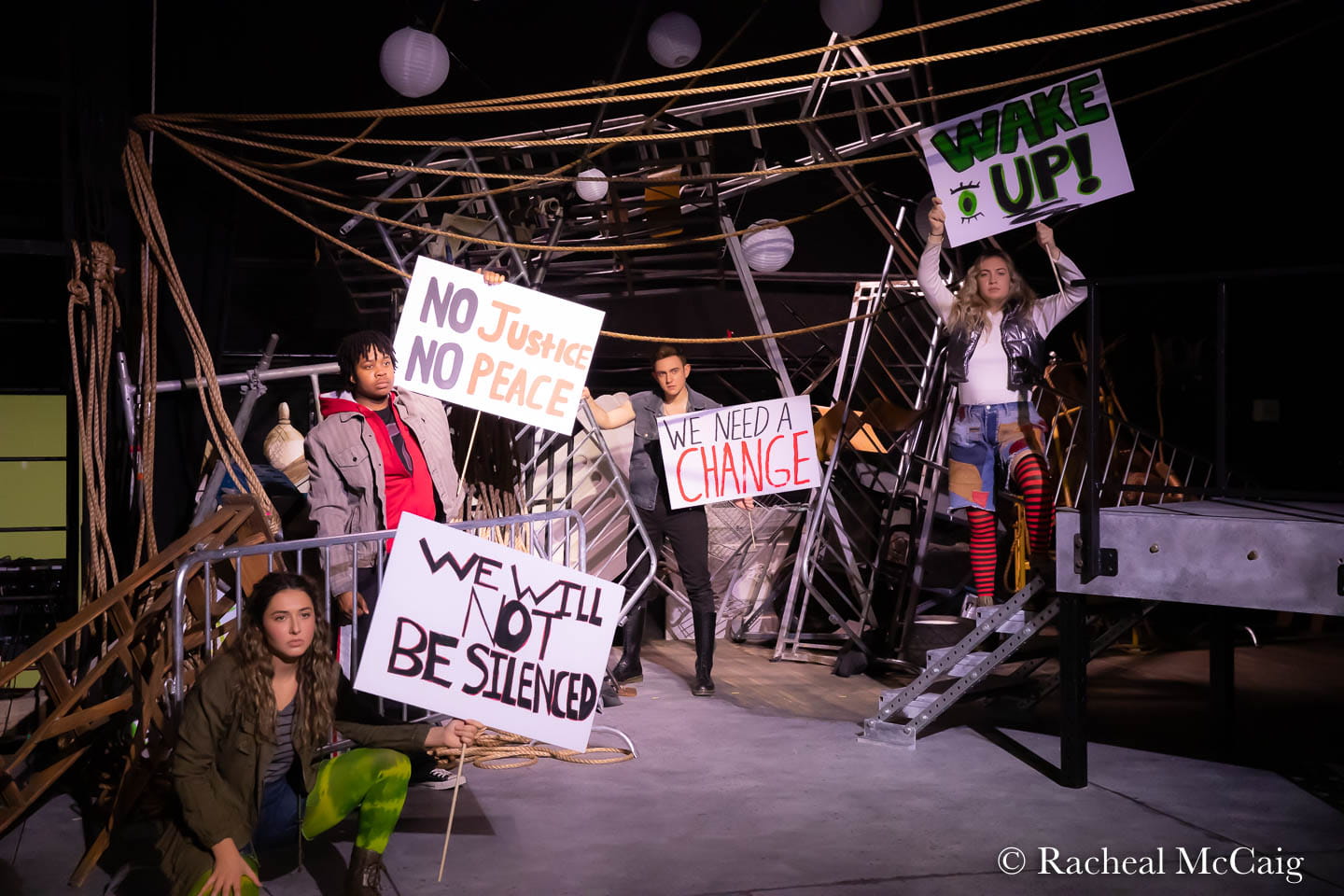 In the Darkness Show Me the Stars is written by Canadian multi-award winning-artists, Twin Flames. The musical explores the despair of COVID-19 victims, as well as those living with mental health and anxiety. It also captures the desperation of George Floyd’s final moments. The musical represents the alienation of ‘the people’ in a dwindling democracy, and is an awakening to the need for people to address systemic racism and sexism all over the world.

In the production, a crescendo builds up slowly, often under a set rhythm or music. There’s no question that 2020 was a year that built up as the days and months passed, getting louder and louder, drowning out the voices of racial minorities and making it hard for any of us to breathe. In the Darkness Show Me the Stars is a deep look into the moments of four young characters living through 2020. They are joined only by the wishes they whisper to the stars.

While governments stoke the flames of racial and political division, these young ones find a way through the darkness and to one another. If you’ve ever experienced a nightmare that you’ve struggled to wake up from, only to finally yourself jolted awake, screaming, covered in sweat and unable to breathe, then you will know what each of these young characters are feeling with their own struggles.

Each character fights to find their strength and stand up for what they believe in. They hold on to the light in the darkness and follow the guiding stars. What is revealed is a lasting change that will leave them forever connected in ways they will never fully understand. We are like constellations — imaginary boundaries formed by connecting the dots.

Multi-award winning, chart-topping Canadian Indigenous artists Twin Flames build bridges across culture, continents and style. The husband-wife duo is made up of Jaaji, (Inuk and Mohawk, from Nunavut) and Chelsey June, métis (Algonquin Cree). Twin Flames bring together a richness of personal history and musical experience. Their songs tell stories of courage and survival written in English, Inuttitut, and French, honouring their ancestor's history and representing their Indigenous backgrounds. Twin Flames has become a beloved powerhouse couple, well on their way to becoming a Canadian household name.

Since joining together, both professionally and as spouses, Twin Flames has released three full-length albums and has been nominated for 25 music awards, nationally and abroad. They’ve won two Canadian Folk Music Awards, three Native American Music Awards, and have earned two #1 hits on the Indigenous Music Countdown’s Top 40. They have played more than 1000 shows throughout Canada, Greenland, the U.S., Australia and France.

The duo was selected as artists-in-residence for the 2019 Folk Alliance International Conference, and partnered with UNESCO to write “Human” – the official song to celebrate 2019 as the International Year of Indigenous Languages. “Human” was also a part of CBC’s Music Class Challenge in 2020 and reached #1 on the Indigenous music countdown.

Their music video for “Broke Down Ski’tuuq” was the first Inuttitut music video to be featured on MuchMusic, and their songs have been featured in movies and television series such as CBC's Tallboyz, Trouble in the Garden, David Suzuki’s Nature of Things: Trapped in a Human Zoo and the documentary Okpik’s Dream. Their music videos "Taanisi" and "Porchlight" were chosen among the films screened at the Indianer Inuit: Das Nordamerika FilmFestival, in Stuttgart, Germany January 2018.

Jaaji and Chelsey's passions include working with youth and inspiring them to dream without limitations. They are the founders of Twin Flames: Sharing Stories of Unbreakable Spirits Presentations, which takes them across the country and the Arctic, sharing music and cultural awareness workshops and songwriting workshops in schools. Their goal is to give back to communities and encourage Indigenous youth to pursue their dreams. They share knowledge with non-Indigenous youth to help them discover Indigenous and Inuit cultures through music. Twin Flames are advocates for mental health, suicide prevention and healthy lifestyles.