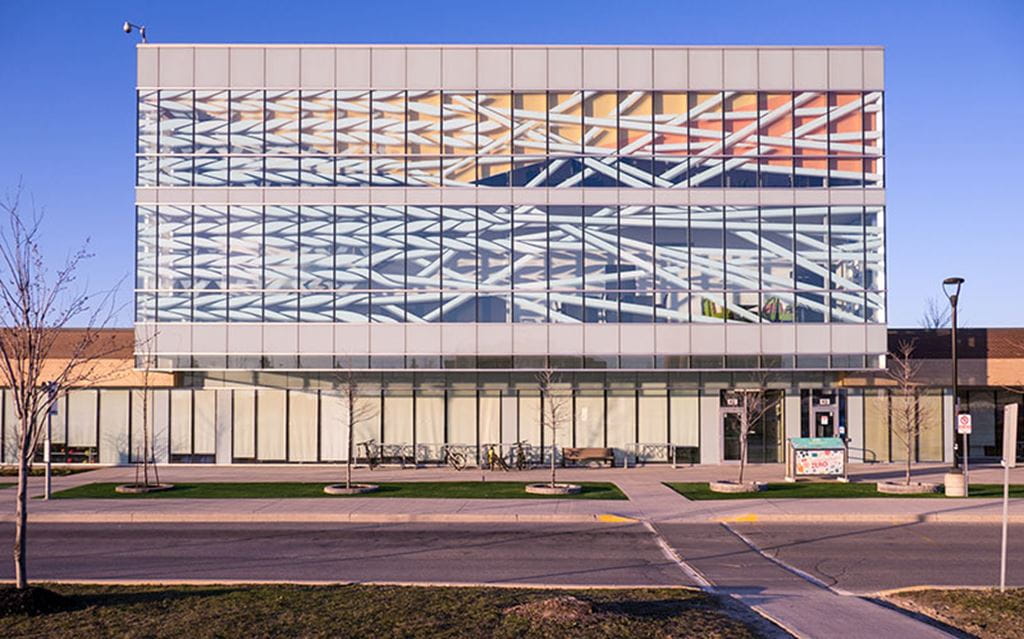 Much more than an aesthetic enhancement, the project was Sheridan’s first large scale foray into experiential design, which concerns how you experience your environment and interact with space.  It also created a reverse internship/co-op learning opportunity for students.  On a functional level, it contributes to energy conservation, rehabilitates an unpleasant space, and adds a visually rich and freely accessible artistic experience to Brampton.

“Sheridan’s core values are creativity and innovation,” notes Dr. James Humphreys, Dean of the Faculty of Applied Health and Community Studies, whose Faculty was the client for this project. “It was important that we find a creative solution to the long-standing challenge of heat and glare building up that made the adjacent stairwell and social space unbearable rather than turning to a simple reflective surface or window tinting.”

The mural consists of vinyl applications (for heat control) to 112 window panes that resemble long pieces of twine and printed perforated blinds on the inside (to reduce glare) that depict hands working with rope.  The art conceptually represents the programs taught in the Faculty of Applied Health and Community Studies. The tight weave represents interdependence and symbiosis while the open areas signify how students branch off to serve, protect and help our communities.

To oversee the project, Sheridan hired Lisa Rapoport and Chris Pommer of PLANT Architect.  “We developed the design in collaboration with students and faculty in charrettes and over the course of a work term,” explains Rapoport.  “The nature of the weaving rope was explored with respect to colour detail, three dimensionality, shadow and methods of cutting vinyl.  Full size tests were erected on site. Energy modeling of the vinyl applique confirmed it would meet energy saving targets and confirmed the direction of the weave.”

Pommer adds, “The interior window treatment was simplified into a shaped and printed blind system after exploring more complex and overlapping cable and other offset structures.  For the imagery, the students photographed the hands of faculty and other students creating a massive bank of hand types, shapes, sizes, ages and positions.  The hand concept parallels the weaving rope on the exterior.”

Two students from illustration, Sadie Marfisi and Chris Sisti and one from industrial design, Neil Smith were paid for their work on the project and also used the experience to fulfill their program requirements for a co-op placement, each having put in 420 hours over the summer of 2015. Marco Cibola, a professor of illustration served as a consultant on the graphics and an additional resource for the students.  Other faculty who contributed to the charrette, supervised students and managed the dedicated workspace on campus include Associate Dean of Design, Illustration and Photography Donna Braggins, Associate Dean of Material Arts and Design Heather Whitton, and Professor Les Sasaki.

The energy modeling was completed with the assistance of Dave Clark, a Project Manager in the Faculty of Applied Science and Technology and Herb Sinnock, Manager, Sustainable Energy Systems at Sheridan, who mentored a student to complete the task, namely Nicholas Ganesh, from the Electromechanical Engineering Technology Co-op program.  The model confirmed that on the hottest days, the space behind the mural requires 55.4 kilowatts to cool it down to a reasonable temperature.  With the vinyl in place, only 37 kilowatts are needed to reach the desired effect, resulting in a peak reduction of 33%.

Ronni Rosenberg, Dean of the Faculty of Animation, Arts and Design adds, “It was very important that we structured this project as a learning opportunity for our students.  It’s a powerful thing when you can create a studio in which industry experts incubate young talent and students get to feel the pride of knowing that they’re creating a legacy piece that benefits the community.”

After the students’ summer co-op term ended, the team at PLANT, together with their staff member Jason van der Burg carried on with the project to oversee the production elements and installation.  The blinds were fabricated by Arrow Graphics, while the vinyl window applications were fabricated by Surface Film Canada.  A visual exhibit archiving the steps and decisions involved in the design and production process is on display in the B wing corridor at Sheridan’s Trafalgar Campus in Oakville.

Review images of the mural in progress.

Read the full backstory of how the mural came to be. 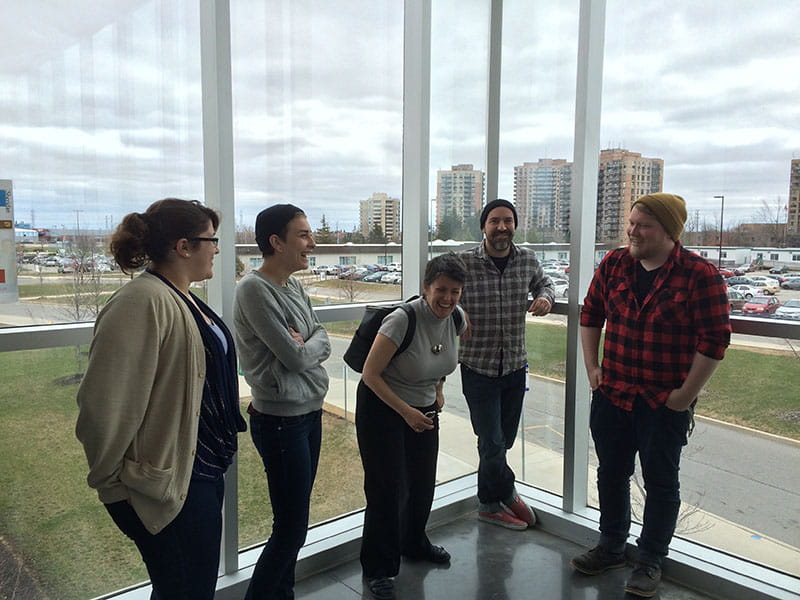 PLANT Architect Inc. is an award-winning, Toronto-based practice that branches into architecture, landscape, and design. The studio’s areas of specialty include institutional and residential architecture and landscape architecture, urban infrastructure, public space, feasibility studies, and master planning. PLANT’s most recent honours include a National Urban Design Award medal (March 2016) for the Nathan Phillips Square Revitalization in Toronto, and a Canadian Society of Landscape Architects National Award of Excellence for the Peace Garden within the renewed Nathan Phillips Square (April 2016). Other notable PLANT projects include the Canadian Firefighters Memorial in Ottawa, and the newly completed East Point Park Bird Sanctuary Pavilions in Toronto.

Bachelor of Interaction Design student Christina Weng will be celebrating two milestones this summer: the receipt of her Sheridan degree…

Interaction designer heads across the pond to Facebook London

As she completes her final year in Sheridan’s Honours Bachelor of Interaction Design program, Alex Thompson already has her first…

Designing your own path

At Sheridan’s Convocation ceremonies in June, graduating students crossing the stage received a folder with the words of Ralph Waldo…