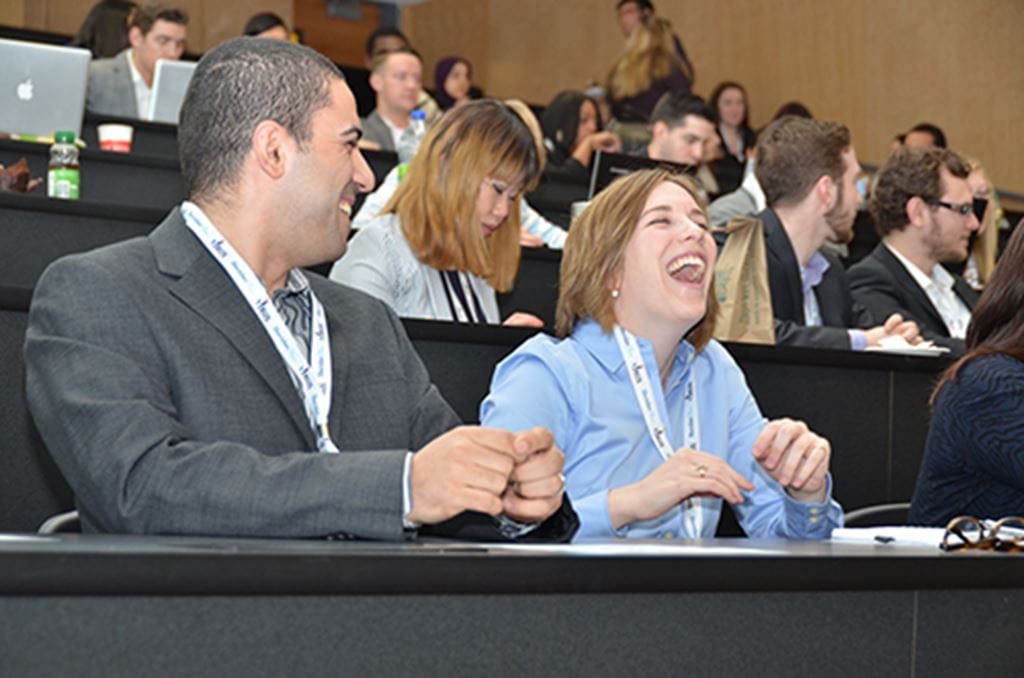 Over 100 Faculty of Business students gathered last week to hear high profile speakers Dr. David Foot and Scott Stratten share their insights about the trends that impact the future.  The Virox Future Forum is an annual event held at Sheridan, spearheaded by one of the school’s most successful alumni – Randy Pilon – Founder and CEO of Virox Technologies Inc.

Responding to feedback gathered from last year’s event, Pilon himself kicked off the day by sharing his advice about entrepreneurship.  Pilon worked for Bausch & Lomb for ten years after leaving Sheridan, during which time he earned seven promotions and an EMBA from Queen’s, and turned down three international transfers. In 1996 he raised more than enough capital needed to introduce a ‘green’ disinfectant to the marketplace and Virox was born.

“Success depends on striking a balance between desire and mechanisms”, said Pilon. “Desire is your passion to get things done and mechanisms are the tools like your network and education.”  Pilon advised the audience to be reflective because careers are iterative, dynamic and competitive. “Recognize your bad habits, constantly and critically evaluate yourself, and hone what you’re good at.”

Dr. David Foot delivered a riveting presentation on worldwide demographics and how they’ve changed since the 1970s.  “To be future oriented, we need to understand where we’ve come from,” he said. Foot took the crowd through reverberations of the boom, bust and echo cycle and urged students to understand the trends in order to recognize the business opportunities that currently exist – and that are forthcoming.  “My job is to provide you with a reality check. Your job is to think about what to do with this information,” he said.

Over the course of the hour, Foot got the crowd thinking by questioning decisions that are made that seem to be counter-intuitive based on data.   “In general, young people head to cities and older people move to rural areas.  So why do we build hospitals in cities?” Foot explained that half of the demands on the health care system are made in the last year of a person’s life. Stating that life expectancy in Canada is 81 years he pegged the greatest impact on healthcare occurring when people are 80 and living outside of major metropolitan areas. 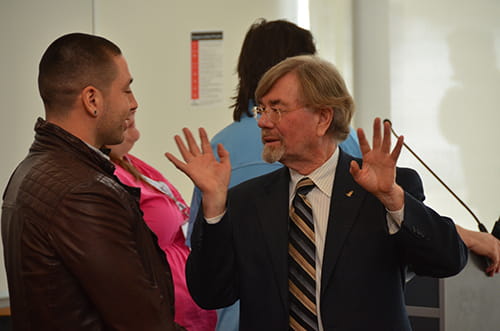 Foot also questioned the logic of awarding the Olympic Games to places like Greece and Japan, where countries are either in debt or have aging populations. “Who will use the facilities after the games are over?” he asked. He noted that one Olympic venue in Greece is now being used to herd animals.

In addition to highlighting discrepancies, Foot had several insights for students.  “Boomers are retiring but they’re gradually trickling out of the market over the next 20 years.  The opportunities will be slow and gradual so you need to take the bull by the horns.”

By Foot’s estimation, Turkey and Brazil are upcoming powerhouses – places with good growth, young people, educated workforces, and populations that are under control.  He also stressed that growth in the US relies on the Hispanic population “so if you want to market to the US, you need to learn Spanish.”

He added that household data shows that people spend the most in their 40s and 50s, suggesting that a market exists for products and services aimed at this set.  He noted that the most populous age groups in Canada are the 50-54 and 55-59 year olds. “Market to them and understand that lower prices don’t always win over the 60 year old customer – good service is the key when people have some disposable income and higher demands.” Foot outlined some of the top leisure activities of this demographic as being exercise walking, gardening and golf and suggested that this is where opportunities lie.

The afternoon speaker, Scott Stratten, shared lessons on virtual and word of mouth marketing, which have been the subject of three books he’s written on the topic. He criticized brands that spend too much time obsessing about details regarding their logo and not enough time delivering the experiences that drive loyalty and engagement. Everyone received a signed copy of his latest book which pokes fun at the misuse of QR codes in marketing.

In a self-deprecating talk that had everyone roaring with laughter, Stratten traced his career after graduating from the HR program at Sheridan.  Working as a national sales training manager delivering two day sessions on how to sell bubble wrap taught him he didn’t like working 9-5 and that there had to be a better way to use his abilities.

Stratten returned to Sheridan to teach in the HR program for seven years and said he got the job because people vouched for him.  “Put yourself above the resume” he told the crowd and find a way to get noticed. Realizing that HR and marketing are both about understanding psychology and human nature, he made the switch – and has written three books on a style of marketing that centres on raising awareness by getting people to share their experiences with a company’s product or service.

Stratten said that people share ideas and experiences that connect to human emotion and that are worth talking about.  He added, “People always remember their first and most recent interaction with the brand.” As such, “marketing is everyone’s job.”  Stratten also urged students to “never stop questioning why” and to “always take the high road” – sharing an example of his own use of Twitter to complain about the service of a particular airline, and how they in turn used the tool to diffuse the situation.   His final words of wisdom included the need for companies to apply “transparency, authenticity and immediacy” to their social media efforts.

Students had the opportunity to ask questions of the speakers, in both a panel discussion format and at roundtable break-out sessions, where they could get face-time with the experts.  Additional table hosts included Martin Harry, Chief Operating Officer at Virox, Jeff Zabudsky, President & CEO of Sheridan, and Bryan Dawson, CEO Aircraft Appliances and Equipment Ltd. and Chair of the Sheridan Board of Governors.

A draw was held to award three students each with a $1000 scholarship from Virox. Winners of the scholarships were Marcus Doherty, Brian Farquharson and Bianca Del Vecchio. Another draw was held for an iPad donated by the Faculty of Business at Sheridan, which went to Harit Kapahi.

Sheridan College is one of Canada’s leading post-secondary institutions, offering over 100 diploma, certificate, and bachelor degree programs in an environment that fosters innovation and creativity. Approximately 5,000 students are enrolled in the Faculty of Business across Sheridan’s three campuses. In September, 2014 Sheridan will launch five new Bachelor’s degrees related to business. Its Faculty of Business has recently been accepted for membership by the Association to Advance Collegiate Schools of Business (AACSB), the U.S.-based international management accreditation body. Sheridan’s business graduates are well positioned for career success in marketing, advertising, accounting, finance, travel and tourism, project management, human resources, and international business.