It’s one thing to have an appreciation for fashion and haute couture. It’s quite another to head off to Paris and learn from the masters. Determined to gain the rare skills of haute couture embroidery, Burlington-based Sarah Cownley stopped dreaming and made plans to study at the prestigious House of Lesage atelier (studio).

She worked three jobs to raise the $8,300 tuition for the three-month professional training course at the Chanel-owned atelier. Lesage is currently responsible for 85% of all embroidery that is shown on the Parisian runways including Chanel, Christian Dior and Lanvin.

At the end of 2009, certificate in hand, Sarah spent the next two and a half years in Paris visiting other ateliers and artists that supply haute couture pieces. She also attended both Paris Fashion Week and Haute Couture Week as a freelance fashion writer for Canadian publications as well as her blog. While in France she met and photographed various celebrities including Cameron Diaz, Jessica Alba, Kanye West and Karl Lagerfeld.

Today, Sarah uses her unique brand of skills to create exquisite pieces of beaded jewellery and embroidery through her Burlington-based company Glimpse Creations. She started her design business shortly after graduating from Sheridan.

Sarah’s work has garnered multiple accolades, including a spot on Swarovski Crystals’ list of Top 20 International Designers in 2006, 2007 and 2008. She has also been featured in various publications, including West of the City, A Needle Pulling Thread, and The Burlington Post.

“I had a love of fashion, and haute couture was the perfect avenue to follow. The atelier houses of Paris still use the same techniques that were being used 100 years ago,” says Sarah who dedicated 150 hours of class time and twice that in painstakingly homework to learn the craft.

But this time-honoured art form is not as strong as it used to be, adds Sarah. “Unfortunately Haute Couture hand beadwork and embroidery is a dying trade.” The number of artisans is diminishing for a few reasons, Sarah explains, including a retiring workforce, a younger generation unwilling to carry on family tradition and cheaper labour available overseas. “This is why I feel it’s important to carry on the traditional craft techniques here in Canada,” says Sarah who is now sharing her skills through teaching and writing a book. “When something is handmade, it carries the soul of the artist with it. We cannot allow these crafts to diminish due to lack of knowledge about the art of couture.” 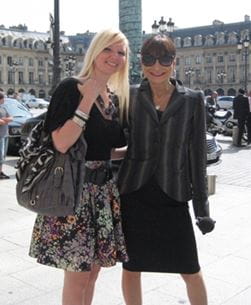