The Social Sciences and Humanities Research Council (SSHRC) and the Canadian Public Relations Society (CPRS) have honoured Sheridan with a new award that recognizes post-secondary institutions for their efforts to promote the benefits and impacts of research in the social science and humanities.

Sheridan was honoured for its work to celebrate Brantwood: 1920-2020, which was the largest production of immersive, site-specific theatre in Canadian history. The show was created, staged and performed through the Canadian Music Theatre Project, an incubator for new musical development housed at Sheridan. It was performed by the entire 38-member graduating class of Sheridan’s Bachelor of Music Theatre Performance program as their capstone project and orchestrated by 40 students in Sheridan’s Technical Production for Theatre and Live Events program under the supervision of faculty members. The production was staged at a decommissioned Oakville school called Brantwood. The show explored a century of hot topics in adolescence and society as told by ghosts of the school.

The communications campaign helped to drive public interest, engagement and active participation in the arts, deepen Sheridan’s partnership with the Town of Oakville, create an appreciation for the young art form of immersive theatre and raise awareness of Sheridan’s renown in musical theatre. Sheridan won the award in the category of large institution (based on enrolment). Trent University and École nationale d’administration publique (ENAP) were winners of the same award in the categories of medium and small sized institutions respectively.

“Much like public relations, the social sciences and humanities play an important role in reflecting and revealing society, challenging assumptions, forging mutual understanding and creating harmony and meaning in society,” says Dr. Mary Preece, Provost and Vice President Academic at Sheridan. “The award provides important validation of the broad spectrum of research activity we conduct at Sheridan, which includes applied research, creative activities, and experimental development to produce innovative products and processes that improve people’s quality of life.” 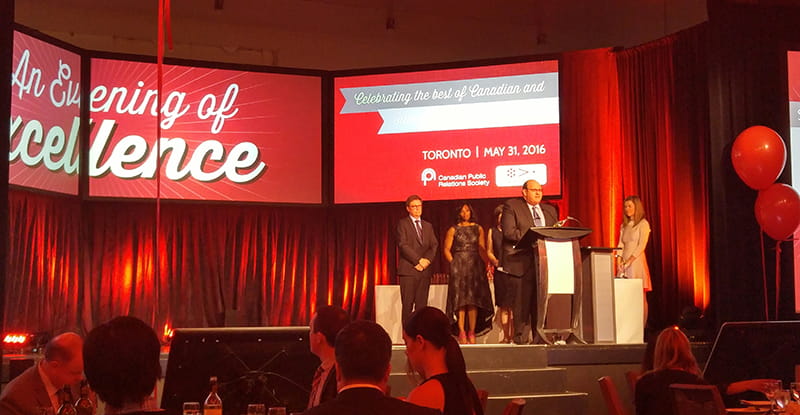 Above: Michael Rubinoff, Associate Dean of Visual and Performing Arts at Sheridan, founder of the Canadian Music Theatre Project (CMTP) and producer of Brantwood at the podium accepting the award

“Winning this award validates the legitimacy of the arts and arts education and the connection of music theatre to research,” adds Mr. Michael Rubinoff, Associate Dean of Visual and Performing Arts at Sheridan, founder of the Canadian Music Theatre Project and producer of Brantwood. “Arts and culture are the time capsules of history. While Canada is a young country, we have important stories to tell. When we give our guest writers the tools and resources to create new musicals and do their best work, we allow them to make a meaningful cultural contribution. This award is a credit to Sheridan’s students, faculty, and guest writers and artists who exhibited an incredible commitment to this culturally significant undertaking."

More information on the Canadian Music Theatre Project on the CMTP website.