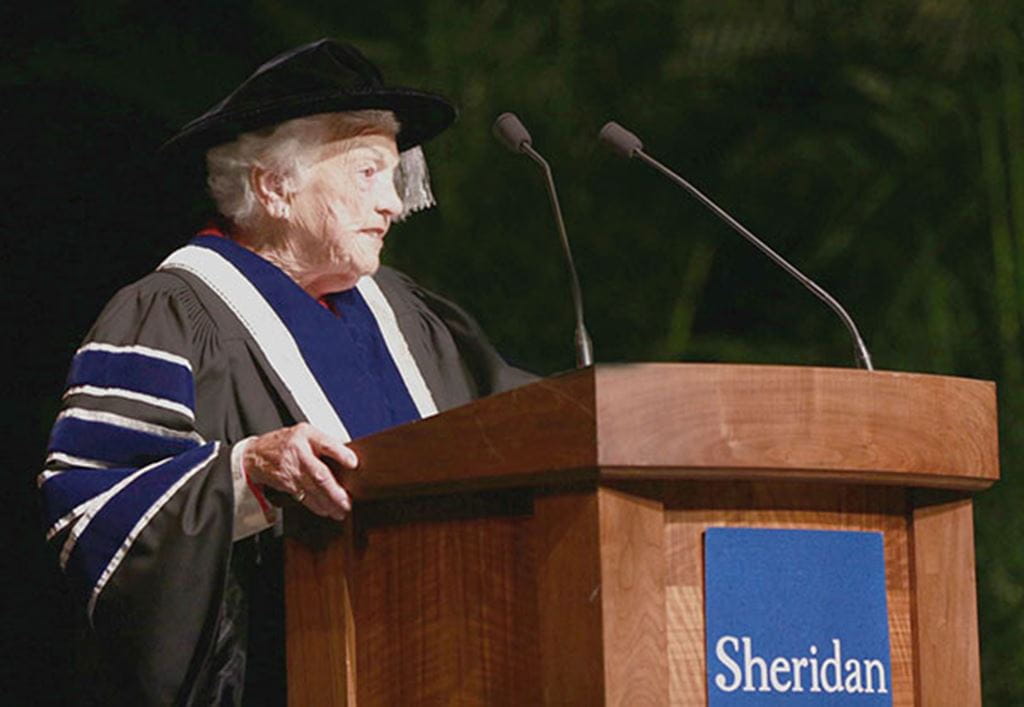 Hazel McCallion, the longest-serving Mayor in Mississauga’s history who has received countless honours in her long and storied career, today embarked on a new challenge at the age of 95.  In a formal ceremony held at the Living Arts Centre in Mississauga this morning, attended by local dignitaries, Sheridan employees and students, and members of the general public, McCallion was sworn in as the inaugural Chancellor of Sheridan.

In her installation address, Chancellor McCallion stated, “I will do whatever I can to make sure that every student who enters Sheridan knows that every door can open before them – whether they start or finish here with an advanced certificate, diploma, skilled trade or undergraduate degree.”

The role of Chancellor is a voluntary and ceremonial position with a three-year term.  As Chancellor, McCallion will preside over Sheridan’s annual Convocation ceremonies and act as an ambassador for the institution.

In a letter of congratulations shared at the ceremony, Prime Minister Justin Trudeau noted, “As an ambassador and leader for Sheridan, I am confident that students will be well-served with Ms. McCallion as a representative for the college.  Her unparalleled experience and tremendous advocacy for Canadians of all backgrounds makes her an incredible asset for the Sheridan community.”

The appointment of a Chancellor is a milestone in Sheridan’s journey to become a university – a vision it formally adopted in 2011.  Since that time, Sheridan has implemented a new governance model with the establishment of the Senate, a body with authority over academic decision-making.  The Chancellor is another feature of this governance model, which aligns with the model commonly in place at Canadian universities.

“Throughout her 36 years as the Mayor of Mississauga, Hazel McCallion embodied the values and attributes that we aim to instill in our students at Sheridan,” said Dr. Jeff Zabudsky, Sheridan’s President and Vice Chancellor.  “We could think of no one better suited to serve as our inaugural Chancellor.”

Ontario Premier Kathleen Wynne also shared her approbation in a letter of congratulations.  “Given the breadth and scope of your experience and knowledge, you have much to bring to this fine learning institution (…) My colleagues and I look forward to working with you and the Sheridan community to continue to ensure that Ontario’s students have access to the best possible postsecondary education.”

The Chancellor’s installation preceded the launch of Sheridan’s Convocation, a series of eleven ceremonies that will take place at the Living Arts Centre this week, which will see over 7,800 students graduate and get set to make their mark in the fields of the arts, business, community service, applied health and technology fields.