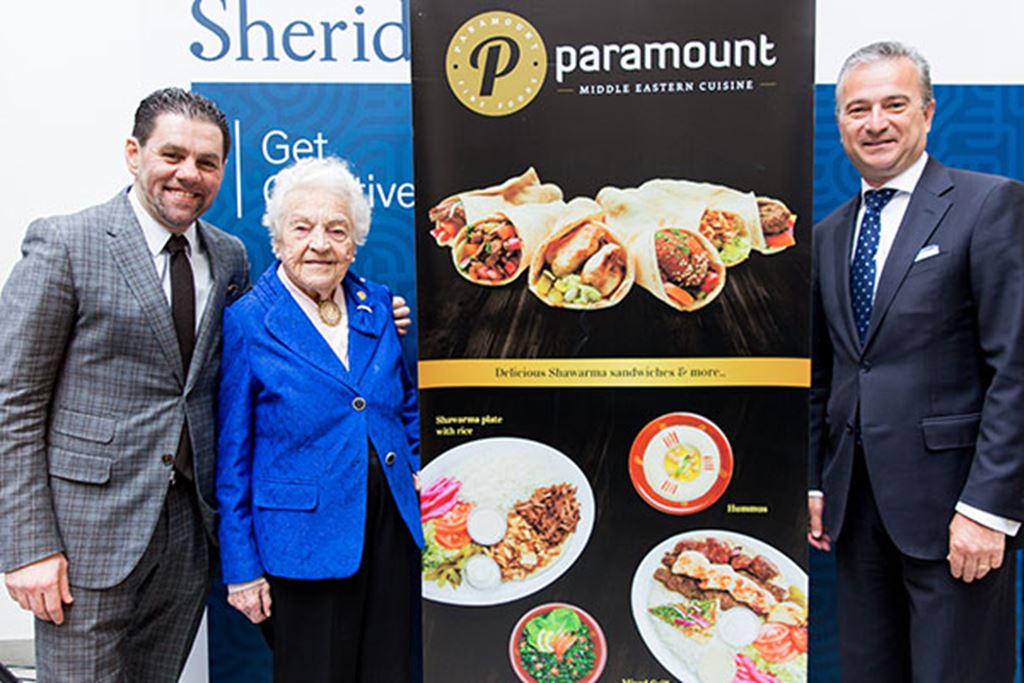 Mohamad Fakih, founder and owner of Paramount Fine Foods, has donated $150,000 to Sheridan’s Get Creative Fundraising Campaign.  In addition to his generous gift, Mr. Fakih is a member of the Campaign Advisory Committee (which is led by honorary chair and Sheridan’s Chancellor-designate, Hazel McCallion), and provides strategic counsel to Sheridan in this role.  His recent gift moves Sheridan closer to its campaign goal of $9 million in support of the Hazel McCallion Campus (HMC) expansion.

Mr. Fakih is the driving force behind the success of Paramount Fine Foods, the company he founded in 2007 several years after immigrating to Canada from Lebanon.  Today, the Mississauga-based company is the fastest growing Middle Eastern halal restaurant chain in North America, with 30 corporate and franchise locations.

“We are very grateful for Mr. Fakih’s generous gift,” said Dr. Jeff Zabudsky, Sheridan’s President and Vice Chancellor.  “His philanthropy, combined with his entrepreneurial spirit and business acumen, will be a source of inspiration to the thousands of students preparing for their own career success at the Hazel McCallion Campus.”

“As a businessman who has grown and expanded my company from its successful base in Mississauga, I believe it is important to give back to the community,” said Mr. Fakih.  “The increase in outstanding educational opportunities available to our residents through the expansion of the Hazel McCallion Campus is very important to the continued economic and social vitality of the city.”

The Hazel McCallion Campus opened in September 2011 and offers a range of business programs, including five Bachelor of Business Administration degrees.  The Hazel McCallion Campus expansion is set to open in September 2016, and will increase HMC’s enrolment capacity to over 5,500 full-time students.  The new 220,000 square foot facility will house program clusters in architecture and interior design, creativity and communications, and business, advertising and visual merchandising.  It features state-of-the-art classrooms, studios, labs and production spaces, a Centre for Creative Thinking, and a gallery space to showcase students’ creativity and innovation.  It will also be one of the most energy-efficient academic buildings in Canada, consuming half the amount of energy - 96 kWh/m2 per annum -compared to standard academic structures.