Sheridan graduates on a roll at the 2015 Parapan Am Games

Sheridan graduates Josh Cassidy and Joel Dembe are among the athletes facing a hometown crowd at the Parapan Am Games from August 7 to 15. With more than 1,600 athletes competing, these games will be the largest Parapan Am Games in history.

Cassidy will be competing in the 800m, 1500m, and 5000m, all held at the CIBC Pan/Parapan Am Athletics Stadium at York University. No stranger to world-class competition, Cassidy holds the record for the fastest wheelchair marathon ever, a title he earned at the 2012 Boston Marathon. He has participated in two Paralympic Games and two Commonwealth Games, winni Ottawa, Ontario-born Cassidy graduated from Sheridan in 2009 with a Bachelor of Illustration, after earning an Art Fundamentals certificate in 2004. The oldest of 10 children, he was diagnosed with neuroblastoma cancer soon after birth. Cassidy conquered the cancer but it left his legs partially paralyzed forcing him to learn how to overcome obstacles at an early age. “I believe anything is possible with passion, hard work and time,” says the 30-year-old.

Cassidy is keen to share this message with others as he competes in the 2015 Parapan Am Games. “It is all about inspiring the future generation through athletics. Sport has truly changed my life, and showing children the opportunities available to them in sport – both at a professional and recreation level – is priceless.”

Training Day for Josh Cassidy: Watch what it takes to be a top tier athlete

Read about this record-breaking athlete in Sheridan’s alumni magazine: ovation.sheridancollege.ca/cassidy

Joel Dembe has also represented Canada on the international stage, having competed in the 2011 Parapan Am Games and the London 2012 Paralympics. He is a three-time Canadian champion and the country’s 2011 Male Wheelchair Athlete of the Year. All admirable accomplishments, but winning with home court advantage at the Parapan Am Games would be a “dream come true” for the Hamilton, Ontario native. He will be competing in both singles and doubles play. 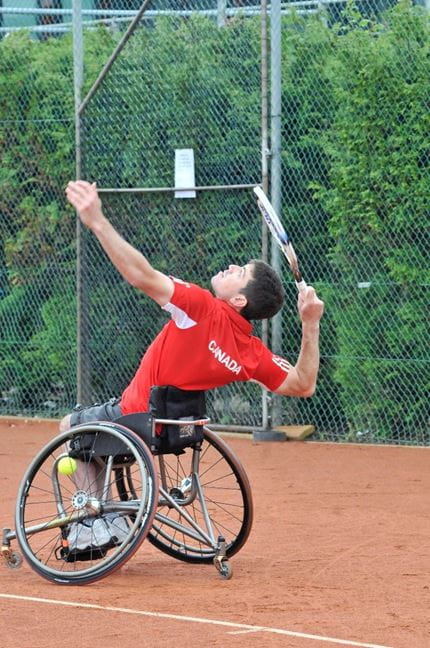 Born with a benign tumour in his back that caused his partial paralysis, Dembe has been active in sports from the age of seven. Now 30, he started playing tennis at 14.

Dembe graduated from Sheridan’s Marketing Management post graduate program in 2008 after obtaining a Sports Management degree. A consultant at Ampro Diversity, a division of Ampro Personnel, Dembe focuses on placing people with disabilities in senior management positions at Fortune 500 companies. “People with disabilities don’t always have the upward mobility that they deserve. We are helping change that so hopefully someday there won’t be a need for a company like ours,” Dembe says.

Read more about Dembe, along with other Sheridan alumni who were part of the action at the TORONTO 2015 Pan Am Games in ovation.sheridancollege.ca/panam

Congratulations to two alumni who captured top honours at the 25th Ontario Skills Competition this month.