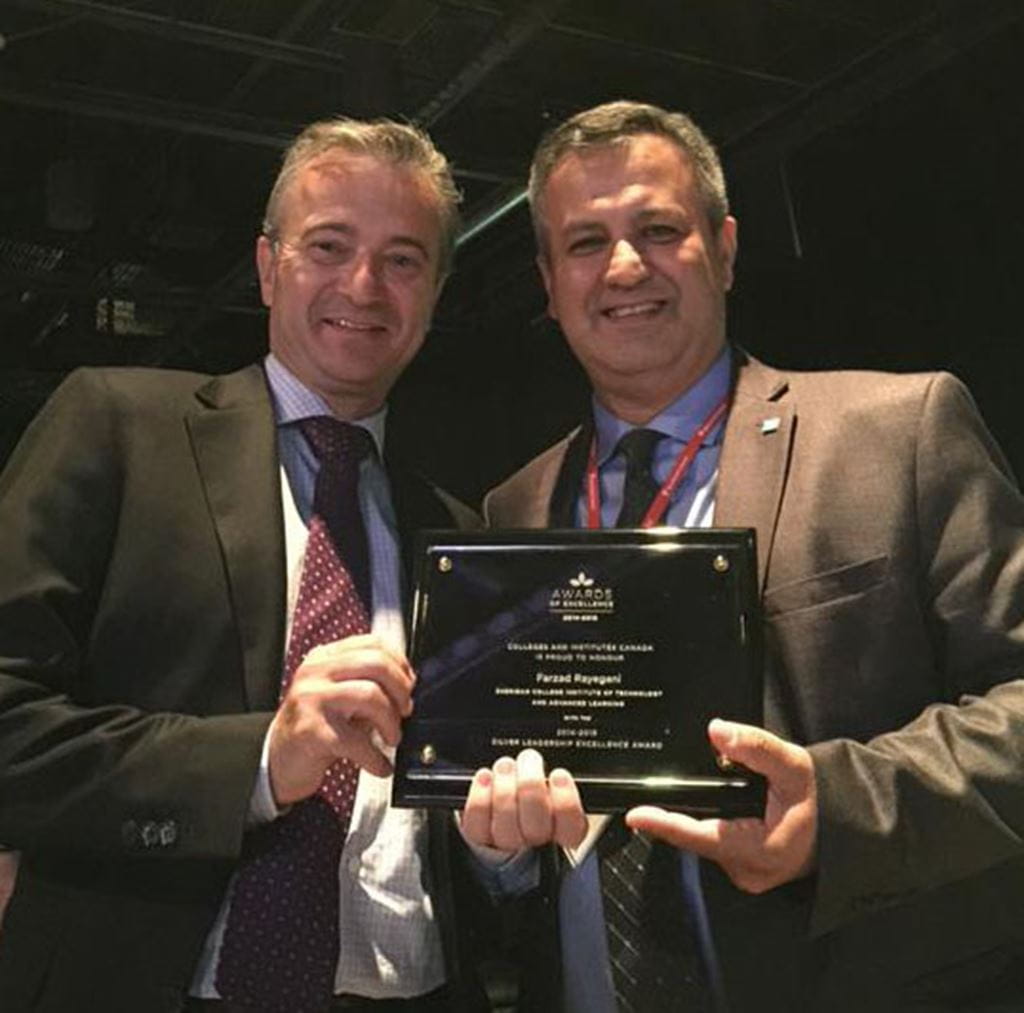 Dr. Farzad Rayegani, Associate Dean in the Faculty of Applied Science and Technology (FAST), was presented with the Silver Leadership Excellence Award by Colleges and Institutes Canada (CICan) at its national conference in Winnipeg on Tuesday evening.

Dr. Rayegani was recognized for the multi-faceted leadership he brings to his various roles at Sheridan.  As Associate Dean of the School of Mechanical and Electrical Engineering & Technology, he oversees 7 programs with a combined enrolment of 1,300 students.  Since assuming the role in 2012, he has established a Student Engineering Association as well as an Engineer in Residence program.  He also gained acceptance for Sheridan as the first college in Canada to join the worldwide network known as CDIO.  This movement – to Conceive, Design, Implement and Operate, was initiated by such institutions as Stanford and MIT to re-invent the way that engineering is taught and practiced.

In 2014, Dr. Rayegani was named Chair of Additive Manufacturing for the American Society of Mechanical Engineers (ASME).  He launched and supervised ASME’s inaugural Innovative Additive Manufacturing Challenge (IAM3D), which asked students from around the world to re-engineer existing products or invent new models to minimize energy consumption.  Under his guidance, two teams involving Sheridan students were counted among the global winners.

Rayegani was also instrumental in establishing the Centre for Advanced Manufacturing and Design Technologies (CAMDT) at Sheridan’s Brampton Campus.  This facility houses state-of-the-art labs and a flexible automation and fabrication centre.  As director of CAMDT, Dr. Rayegani has attracted over $7 million in cash and in-kind support from government partners and industry, including Hatch, ABB Robotics, and Cimetrix.  CAMDT has worked with over 40 companies since 2012, assisting them to develop and adopt new technology.  “CAMDT is a vital innovation centre for SMEs, providing them access to capabilities that would not be within their reach,” says James Janeteas, President of Cimetrix Solutions.  “By engaging students in real world projects, they acquire experience and skill sets not easily taught in a traditional classroom.”

“Dr. Rayegani is a dynamic leader who has exhibited a tireless dedication to advancing the field of engineering education in the 21st century,” says Dr. Jeff Zabudsky, Sheridan’s President and CEO.  “His initiative, energy and drive have reaped countless benefits both for our students and our industry partners.  We are proud to see him recognized with this prestigious award.”

Colleges and Institutes Canada (CICan) is a national organization representing 135 member institutions.  The Awards of Excellence is an annual program recognizing outstanding administrative leadership, teaching, staff, programs, and student leadership.  Sheridan has won a total of 17 awards of excellence since 2000.