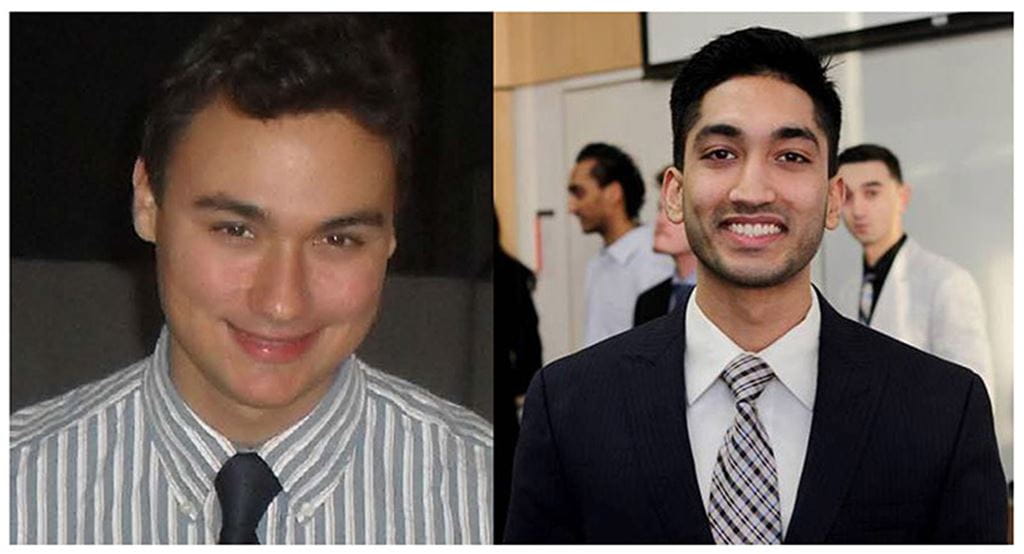 For the third consecutive year, two Sheridan students have been recognized as outstanding Co-op students by the Canadian Association for Co-op Education and its provincial counterpart, Education at Work Ontario (EWO).

Ricardo Chavez, a student in the Software Development and Network Engineering program, received an Honourable Mention from CAFCE.  Ali Zaheer, a student in Business Administration – Finance, was selected as Co-op Student of the Year by EWO.

Originally from Brazil, Ricardo Chavez earned a law degree before deciding to come to Canada and enroll at Sheridan to pursue his passion for computers and technology.  On his summer Co-op term, he combined two separate experiences.  For the first half, he worked with Translucent Computing as they developed a new storybook app for children.  Ricardo’s skills resulted in him being assigned responsibilities usually reserved for senior developers. With his help, Translucent successfully launched the Terry the Dinosaur app to very positive reviews.

For the second half of his work term, Ricardo worked with Sheridan’s Undergraduate Research department, and assisted in the development of a special crawler that could appear on a television to easily allow older adults to view content shared by their family members over social media.  The completed project went on to win third place at the Polytechnics Canada Applied Research Showcase in 2014.

“Ricardo is an excellent role model for all students, but for international students in particular,” says Cory Latimer, Manager of Co-operative Education at Sheridan.  “He is proof that when a student enters Co-op with a commitment to be successful, they can accomplish their personal goals and add significant value to our industry partners.”

Ali dedicated his fall 2014 Co-op work term to supporting students as part of the Financial Aid office team.  His exemplary performance in this position was characterized by a strong empathy for students and a desire to go above and beyond in assisting them.  “Ali’s excellent approach to student inquiries has led to significant improvements in the levels of customer service provided by the Financial Aid and Awards Office,” says Laurie Jackson, Director.  “Having a student working in a very visible part of the department made the office appear to be more approachable and, with Ali’s hands-on approach, the student experience around OSAP is becoming de-mystified.”

Despite his busy study/work schedule, Ali also took the initiative, with a fellow student, to establish the Sheridan Finance Association, an on-campus club dedicated to helping students achieve career success.  Ali’s commitment and hard work resulted in an on-campus event featuring representatives from TD Canada Trust, who shared resume tips and collected resumes from students.  As a direct result of this event, 16 students were employed by TD within 3 weeks of the event taking place.

These two honours are each awarded annually to one college and one university student who demonstrate exceptional job achievement, high academic performance, outstanding community service, and a strong contribution to co-operative education. Having two Sheridan students recognized at such a high level is testament to the quality of the college’s student community.

Pictured above (left to right): Ricardo Chavez and Ali Zaheer