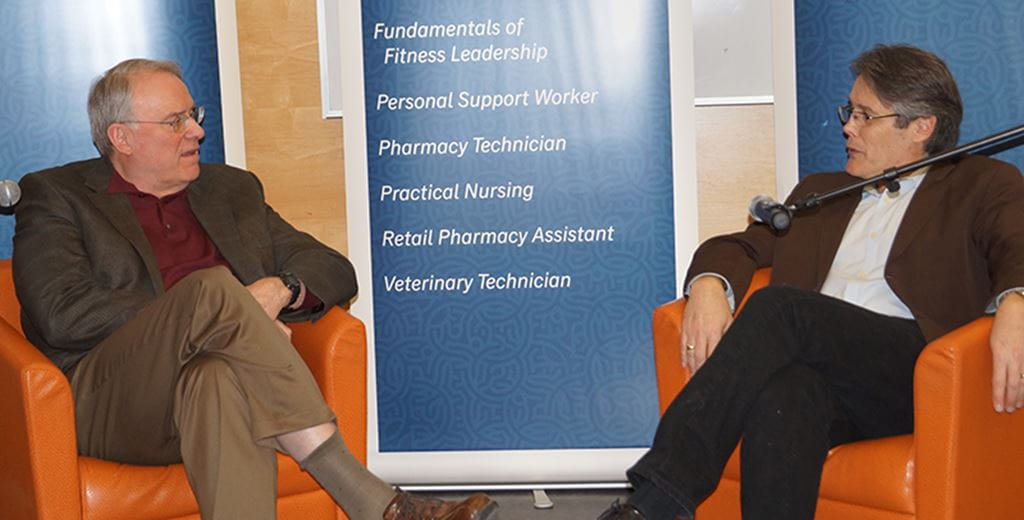 Ken Dryden Shares his Vision for Canada at Sheridan

Ken Dryden -- author, politician, educator, lawyer and hockey hero – spent two days at Sheridan, sharing experiences from his many walks of life to drive home the point that community matters.

Dryden was a guest of the Faculty of Applied Health and Community Studies. He was participating in its Community Builder Series, a year-long sequence of events, speakers and documentary screenings with a focus on building better and healthier communities.

At a free, public lecture on the evening of March 23, Dryden told a crowd of 100 people of all ages that “your community shapes you”.  He reflected on growing up in what was then the new suburb of Etobicoke, just west of Toronto, and the feeling of possibility that came with living there.

Dryden spoke of his love for college and university campuses and their energy, optimism and opportunity for learning.  He studied at Cornell and recalls it was a community that was “serious, in an interesting and fun way.” He spoke of professors and hockey coaches who were at the top of their professions and who taught him to “approach life with ambition.”

While Dryden is well known for his goaltending in the 1972 hockey summit series with Russia and for helping the Montreal Canadiens win six Stanley Cups, he told the audience that what he most takes away from those experiences was being surrounded by people who were really good at what they did.  “I wish you all that experience . . . to know what that feels like,” cautioning that no one can succeed completely on their own, not in business, sports or in any field.

While still playing professional hockey, Dryden went to McGill to study law. He recalls being irritated by journalists who remarked at the time that the credential would give him something to “fall back on” after the NHL.  “Why would you want to fall back” after leaving one career and pursuing the next, he wondered? “You should always hope that whatever follows is more interesting and worthwhile.”

Dryden feels he succeeded in this aim, being elected to federal politics as MP for York Centre and being named Minister of Social Development. He told the crowd that he considered himself “the luckiest man in Ottawa” because he had a “goal and a purpose” to build a system, not just a finite program, related to childcare. As an MP, he felt his main goal was to “understand this country and the time that we live in.”

That idea is at the root of a new course he developed and now teaches at Canadian universities, following his 2011 election defeat. Called “Making the Future”, it challenges students to envision the kind of Canada they want to live in.  The course is offered at McGill, the University of Calgary, Saskatchewan, Ryerson in Toronto and Memorial in Newfoundland.

Looking forward to Canada’s 150th anniversary in 2017, Dryden suggests that a worthwhile project would be to create a collective portrait of Canadians in their communities.  He suggests that what defines us best as a nation and showcases why our future is exciting are the everyday stories of people doing interesting things.

Ken Dryden was again in attendance for the Community Builder Symposium held at the Davis Campus in Brampton on Tuesday, March 24.  The event featured a Learning Café, where faculty and students ran displays and interactive stations focused on community building.  Visitors could explore the use of educational technologies to promote inclusion; learn about the Me to We program; the Iron John/Iron Joan program; and the Exercise is Medicine project, among other initiatives underway at Sheridan.

Attendees also had the opportunity to view two documentaries, produced by Sheridan students in collaboration with renowned documentary filmmaker, Laura Sky.  The first film focused on trauma and substance abuse, and building healthy communities by challenging stereotypes and reducing stigma.  The second, entitled “Painting Portraits”, looked at the challenges that some students, who are also parents, face in juggling multiple responsibilities.

The culminating event for both the Symposium and the Community Builder Series was a conversation featuring Ken Dryden and Ralph Benmergui, former broadcaster and current Executive Advisor to Sheridan’s President.  They touched on a wide range of topics in their lively discussion, from hockey to politics, from truth and ‘truthiness’ to the meaning of community.

Pictured above: Ken Dryden (left) and Ralph Benmergui at the Community Builder Symposium