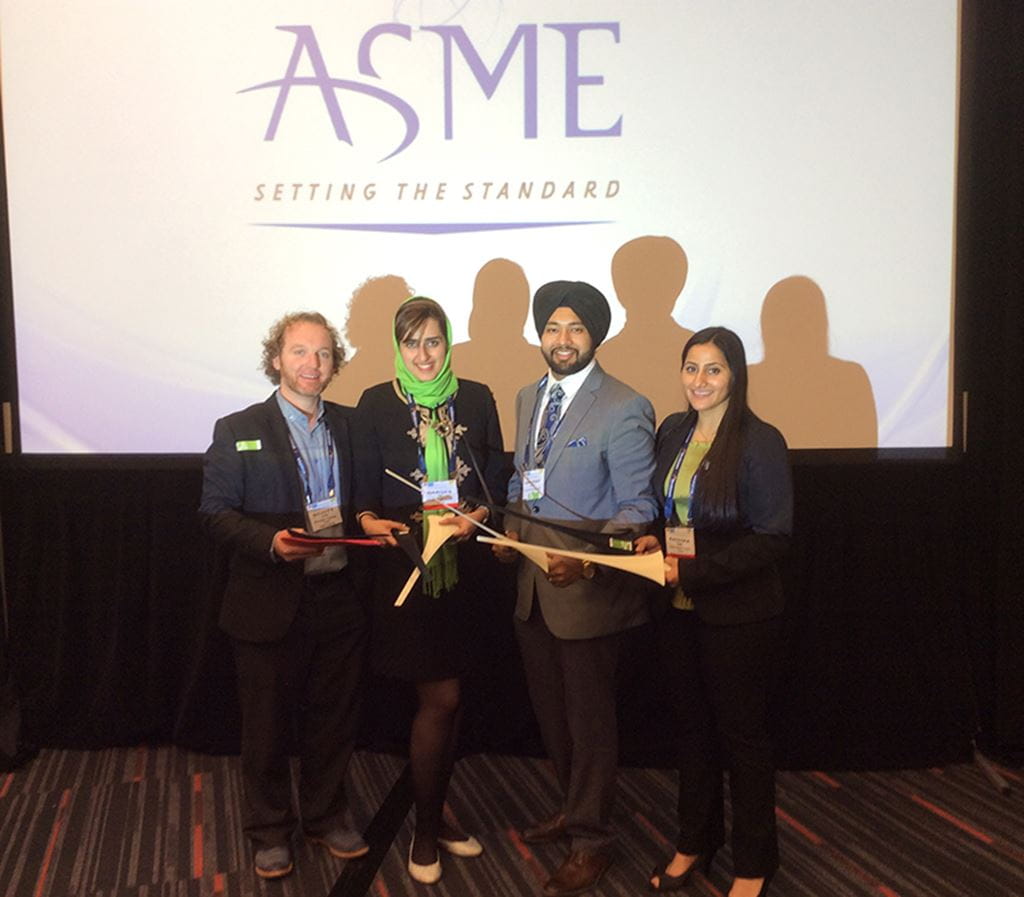 The Innovative Additive Manufacturing 3D (IAM3D) Challenge, sponsored by the American Society of Mechanical Engineers (ASME), held its finals this past weekend in Montreal during the ASME 2014 International Mechanical Engineering Congress and Exposition .

Among the winners were two Sheridan teams. The Winds of Change project earned the Best Re-engineered/Multidisciplinary Collaboratively Designed Product award, as well as the People’s Choice award.  The 3D Printed Live Rock project was named runner up in the Best Innovation to Commercialization award.  The Winds of Change team received a $2,000 cash award from ASME and $500 from HP for the People’s Choice award, while the 3D Printed Live Rock team was presented with a $500 award.

A recap video of the ASME event can be viewed here.

The Winds of Change project was inspired by the plight of countries like Somalia, where electricity production and use are low, and where the primary source of energy is biomass fuels like charcoal and firewood. The project focused on designing a wind turbine using additive manufacturing resulting in reduced manufacturing time and cost, while capitalizing on the climactic environment in countries like Somalia, which offer sufficiently high wind speeds to support the effective use of wind turbine technology.

The 3D Printed Live Rock project was inspired by the desire to protect the world’s reefs from desecration by home hobbyists who seek to replicate the natural environment by purchasing and installing live coral in their aquariums. The project team proposed using 3D scanning and printing to replicate the features of living coral and offer a sustainable alternative to this growing market. (In 1999, an estimated 9.6 million U.S. households owned an aquarium).

“We are very proud of the accomplishments of our Sheridan teams in the inaugural IAM3D Challenge,” said Dr. Farzad Rayegani, Associate Dean of Sheridan’s School of Mechanical and Electrical Engineering, and Chair of the ASME Committee on Additive Manufacturing. “Their projects demonstrated true creativity and inventiveness in applying additive manufacturing capabilities to address real-world challenges.”

Three teams of Sheridan students were among the 24 finalists in the IAM3D Challenge, selected  from entries submitted by over 100 universities around the world.

ASME is a not-for-profit membership organization that enables collaboration, knowledge sharing, career enrichment, and skills development across all engineering disciplines, toward a goal of helping the global engineering community develop solutions to benefit lives and livelihoods. Founded in 1880 by a small group of leading industrialists, ASME has grown through the decades to include more than 130,000 members in 158 countries. Thirty thousand of these members are students.

Sheridan Proud to be an Inaugural Partner in Canada Makes

Canadian manufacturers looking to join the 3D printing revolution are about to get some assistance with the launch of www.canadamakes.ca, a national network of excellence dedicated to the adoption and development of additive manufacturing in Canada.