Nov 27, 2014
Sheridan alumni took home two of six prestigious Ontario Premier’s Awards at a gala ceremony on November 24. Congratulations to James Forbes (Mechanical Engineering Technology, 1971) who received the Technology award, and Tibor Madjar (Computer Animation, 1999) who won in the Creative Arts and Design category. The annual Premier’s Awards recognize the important social and economic contributions Ontario college graduates make to the province and throughout the world.

Tibor Madjar (Computer Animation, 1999) played a leadership role in devising Mudbox, a 3d sculpting software used to create complex visual effects for Oscar-winning films including King Kong, Avatar, Life of Pi, and The Curious Case of Benjamin Button. Madjar received a 2014 Academy Award for scientific and technical achievement for developing the software which dramatically reduces the amount of time and money it takes to produce complex visual effects.

Mudbox has been widely adopted by the entertainment world and many outside industries where digital modelling is useful. The software is also taught to Sheridan animation students. Following the success of Mudbox, Madjar created an e-commerce software company in 2007 that now employs 35 people in offices in Canada, Europe and the United States.

Madjar, who came to Canada from Serbia at 21 years old in 1987 with no connections or English language skills, studied at the Ontario College of Art and Design before attending Sheridan.

Upon accepting his Premier’s Award, Madjar expressed hope that his two children, would be inspired by his success to find their own passion in life. His wife, Brenda Mah-Madjar, whom he met at Sheridan, is a two-time grad: Graphic Design, 1989, and Computer Animation, 1999. 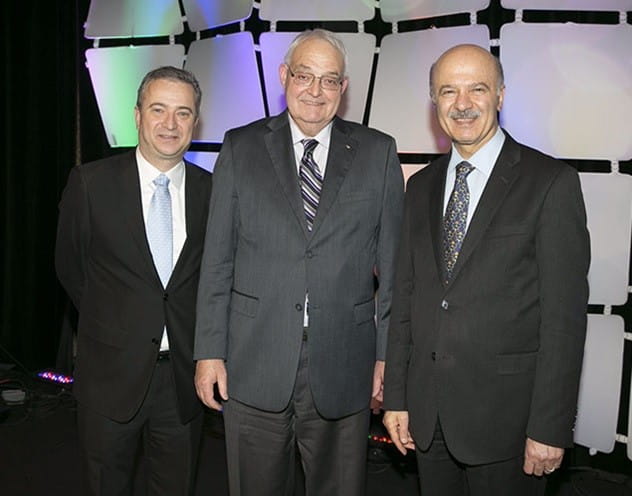 An award-winning expert in railcar design with 108 patents (and 35 pending), he has advanced the safety and productivity of railway freight cars used in North America over the course of his long career.

Forbes has mentored over a dozen engineers and teaches part time at Sheridan where he inspires students to grasp the mechanical engineering fundamentals they need to succeed.

One of Sheridan’s first graduates, Forbes credit the college with setting him on the path to build a rewarding career. “Sheridan gave me confidence and a tremendous start. It was much more applied and yet it was theoretical enough that I got a good foundation in engineering and excellent preparation for university,” said Forbes, who also completed Bachelor’s, Master’s and PhD degrees in Applied Science at the University of Waterloo.

Madjar and Forbes were among 114 graduates from Ontario’s 24 colleges nominated this year in six categories. Sheridan alumni have won 14 Premier’s Awards since the program was introduced by then Premier, The Hon. Bob Rae, in 1992.