The building was also the inaugural recipient of a new category of Urban Design award called Healthy by Design, which is presented in partnership with the Region of Peel, Public Health Unit.  Projects that are deemed healthy by design contribute to the creation of walkable, sustainable and complete communities. They demonstrate inter-related healthy development elements that include density, service proximity, land use mix, street connectivity, streetscape characteristics and parking.

The jury’s report noted that Sheridan’s Hazel McCallion Campus “is an example of a great building with great site context, a phenomenon which can serve as the catalyst for surrounding urban change.” It added that the building welcomes pedestrians, cyclists and transit users, demonstrating an urban identity for Mississauga.  Other highlights included the permeability of the building façade which promotes a strong indoor/outdoor relationship, geometric layering of pedestrian paths within the adjacent park, flush curbs, and the clever screening of the building’s transformers and utilities. 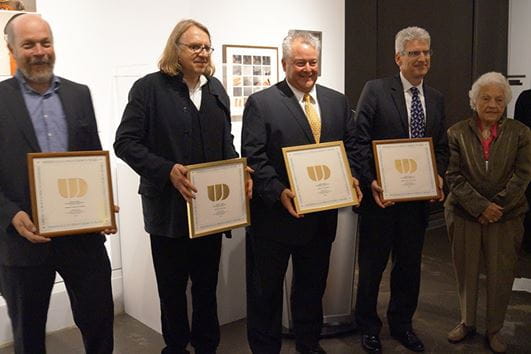 Commenting on the awards last night, Dr. Jeff Zabudsky, President and CEO of Sheridan said “We are tremendously honoured by these awards and the recognition that our landmark building is helping to invigorate and diversify Mississauga’s city centre.   We are proud of the role that our campus plays in supporting the city’s economic and social development by providing opportunities for youth, adults and new immigrants to obtain a higher education.”