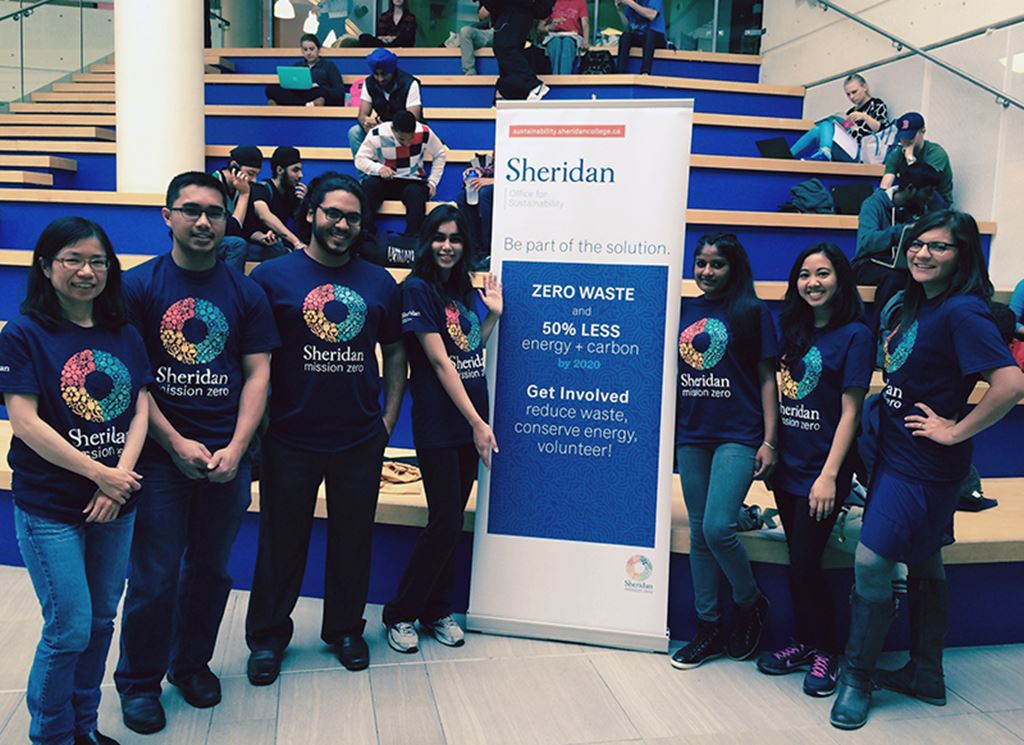 October 20 to 26 marked Waste Reduction Week, an effort launched by recycling councils and environmental organizations to educate Canadians on the repercussions of wasteful practices. The philosophy is one that is critical to Sheridan’s Office of Sustainability and its Mission Zero program, which delivers various initiatives throughout the year to achieve similar objectives.

“Sheridan’s Mission Zero aims to provide a framework for institution-wide sustainability initiatives,” said Herb Sinnock, Manager of the Office for Sustainability at Sheridan. “It’s an ambitious program, but one that is vital to ensuring a large institution like Sheridan does its part in reducing waste and carbon emissions.” Its two-pronged approach includes achieving a net zero-waste objective and a 50% reduction of energy and carbon emissions resulting from activities on Sheridan campuses by 2020.

Sheridan’s community is making significant strides towards meeting its Mission Zero objectives. In September, Sheridan’s Trafalgar Campus in Oakville saw a positive improvement in the diversion rate of waste up to 46.3% from 16.5% in September 2013. The Davis Campus in Brampton had a diversion rate of 27.5% and 51.8% at the Hazel McCallion Campus (HMC) in Mississauga. In the first nine months this year, Sheridan generated 878 tons of waste to landfills, which was 105.3 tons, or 10.7%, less than the landfill waste produced in the same period last year.

A total of 34 tons of organic waste were diverted from landfills from Davis, HMC and Trafalgar from January to September, which was converted to an estimated 11,680 kilowatt hours of energy and 2750 kilograms of fertilizer. The amount of electricity generated and put into the power grid is enough to power 444 home in Ontario for one day. In addition, 6,168 kilograms of electronic waste has been diverted from landfills during the same time period.

“The results of our Mission Zero efforts to date are encouraging,” said Sinnock. “Getting to this point has required the joint efforts of everyone in the Sheridan community.” Sheridan-wide initiatives have included new signage for waste bins, introducing new students to sustainability initiatives at orientation, and informative window displays by Visual Merchandising Arts students about waste reduction. In October, a waste audit was completed on campus in Oakville, which involved Sheridan Sustainability staff and students sorting through and categorizing waste by hand.

In November, Sheridan will be hosting its second Repair Café at Davis. This event brings together students and staff with broken, electronic or household items, and “fixers”, volunteers from the school community who are skilled at repairs. Also in November, Sheridan’s Skills Training Centre (STC) in Oakville will be set up with the Zero-Waste program, further expanding the potential for reducing waste across the college. 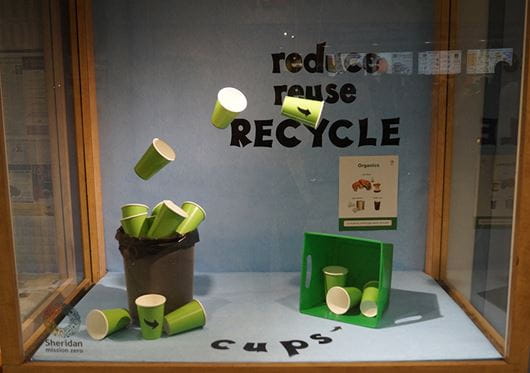