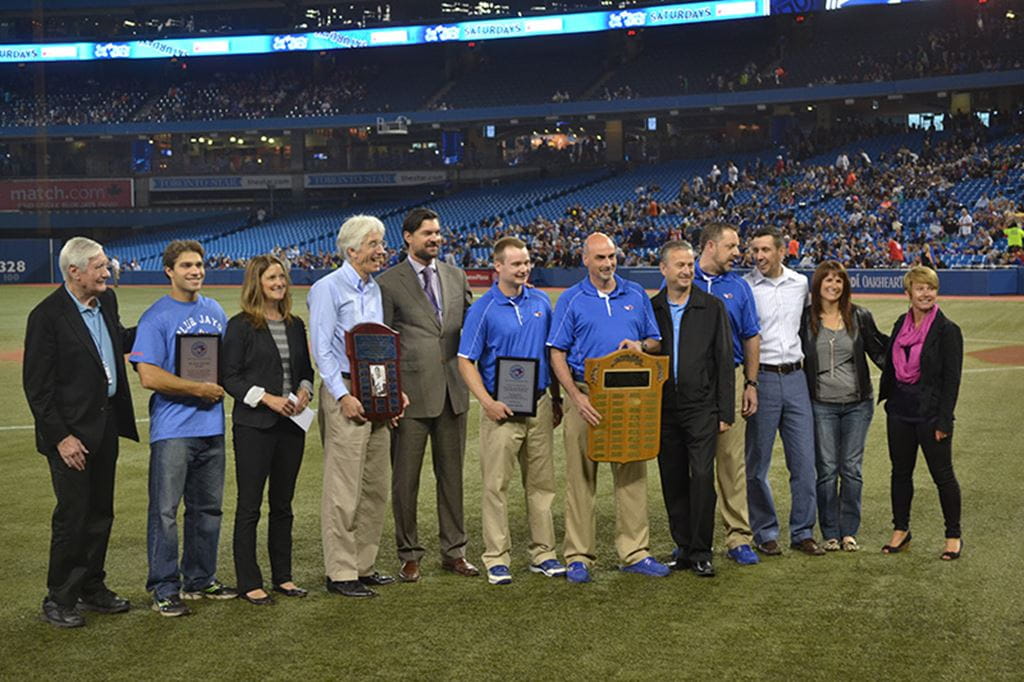 Awards were presented to two Sheridan students on Saturday at the Rogers Centre before the Toronto Blue Jays and Tampa Bay Rays took the field.

Jason Amadio and Tommy Kratky who are entering their fourth year in the Bachelor of Applied Health Sciences (Athletic Therapy) program were recognized in front of a nearly sold-out crowd by Jays’ athletic trainers and Sheridan staff.

“It’s an honour to help recognize the achievements of two of our students on such a large stage,” said Dr. Jeff Zabudsky, President and CEO at Sheridan. “Sheridan values the long-standing partnership between our Athletic Therapy program and the Jays organization.”

Amadio was awarded the Dr. Ron Taylor Award for academic excellence and leadership. He actively participated in extra-curricular activities related to athletic therapy and demonstrated strong interpersonal skills inside and outside of the classroom. Taylor, for whom the award was named, played in the major leagues in the sixties and later became the team physician for the Toronto Blue Jays, a position he held from 1979 to 2012. He was in attendance to help present the award.

Kratky was presented with the Toronto Blue Jays Sports Medicine Scholarship for Athletic Therapy by George Poulis, the Jays’ veteran head athletic trainer. The honour included an internship opportunity with the Toronto Blue Jays. Kratky was selected by the Jays’ athletic training staff earlier this year and has been working with them in the clubhouse at home games this season. The award has been handed out to a Sheridan student for the past 25 years.

The Athletic Therapy program at Sheridan was the first of its kind in Canada and is currently the only college program in Ontario to be accredited by the Canadian Athletic Therapists Association.