Over 100 business owners, service providers, entrepreneurs and industry professionals gathered at Sheridan College on June 12 to attend the Age Aware Summit – a full day event dedicated to helping  people learn how to market effectively to aging consumers.  Speaking in Canada for the first time, UK-based consultant Dick Stroud (pictured above) headlined the summit which was hosted by the Sheridan Centre for Elder Research.

“Our society is getting older and it’s getting older quite quickly,” began Stroud.  “In the last fifteen years, the 50-74 age group in Canada has grown three times as much as the rest of the growing age groups put together.” To help people understand how to better target this group, Stroud challenged some commonly held marketing assumptions.

“Generational marketing is of limited value,” he declared.  “Big differences get missed and there is too much stereotyping.” He pointed to research from Duke University that showed that contrary to widespread assumption, the boomer generation is one of the most heterogeneous ever.  “There’s a big mix of people and viewpoints and yet we tend to group boomers into one mindset. Beware of making age a proxy for behaviour.”

Stroud believes the other variables that determine a person’s attitudes such as their education, family condition, socio-economic background and income might be have far more importance than their date of birth.  “There are no five golden rules that explain how older consumers behave. There’s no simple way of unraveling this generation or any other generation.”

“What happens in my experience is that it is all about the 1% improvements. It’s about getting the little things right and they aggregate together to become a coherent marketing campaign.  A key insight can be helpful as a starting point, but it’s the execution that makes the difference.”

That key insight could come in the form of first deciding whether a business has what he called an “age-neutral” or an “age-silo” product.  Doing so helps a company determine the extent to which age is the primary driver of consumption, which in turn affects priorities, media strategy and key messages.

Once organizations understand where they stand on this spectrum, the next step is segmentation.  “Older consumers are the sum total of everything that is happening to them – not just aging.  Segmentation makes you think through what the person looks like that you are trying to get to. Often it’s a hazy picture.  With segmentation, we’re adding richness and colour to understand how they are going to behave.”  Stroud advised that organizations need to decide the most appropriate factors that impact the purchase of their product or service. This might be the consumer’s gender, income, education, lifestyle and digital literacy at a minimum as well as how progressive and positive people are in their ideas.

He also urged the audience to consider the implications of physiological aging that affect people’s senses, mind and bodies, noting that it is “predictable, complicated, relentless and universal.” He referenced research from Nielsen that refuted the long-held notion that our brains are like computers that get clogged up and slower as they age in favour of a new explanation that suggests that what people really have is a declining ability to suppress distraction.

“That knowledge affects everything in the marketing spectrum, from your website interface to your product design.”  One of the many factors of aging that Stroud discussed was Sarcopenia – or muscle loss in older individuals, which affects muscle speed, strength and flexibility.  “Most of the major food manufactures are developing food types that will include additives to reduce the rate that muscles decline in power.  It affects so many areas, including ones that aren’t obvious like digestion.”

Stroud’s final piece of advice was for companies to consider the entire customer journey and view all the customer touch-points along the way through the lens of aging.   Doing so forces organizations to consider how to improve areas they might have overlooked like packaging, delivery and support.  As a parting thought he noted that businesses that expend the extra effort will end up with higher value products.  “The simple message is this – your chance for success increases if you abandon your monochrome definition about the people you want to reach.” 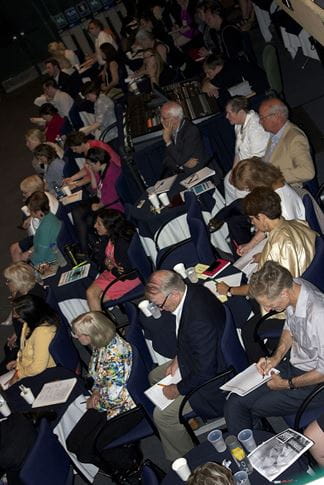 Delegates at the Age Aware Summit at Sheridan