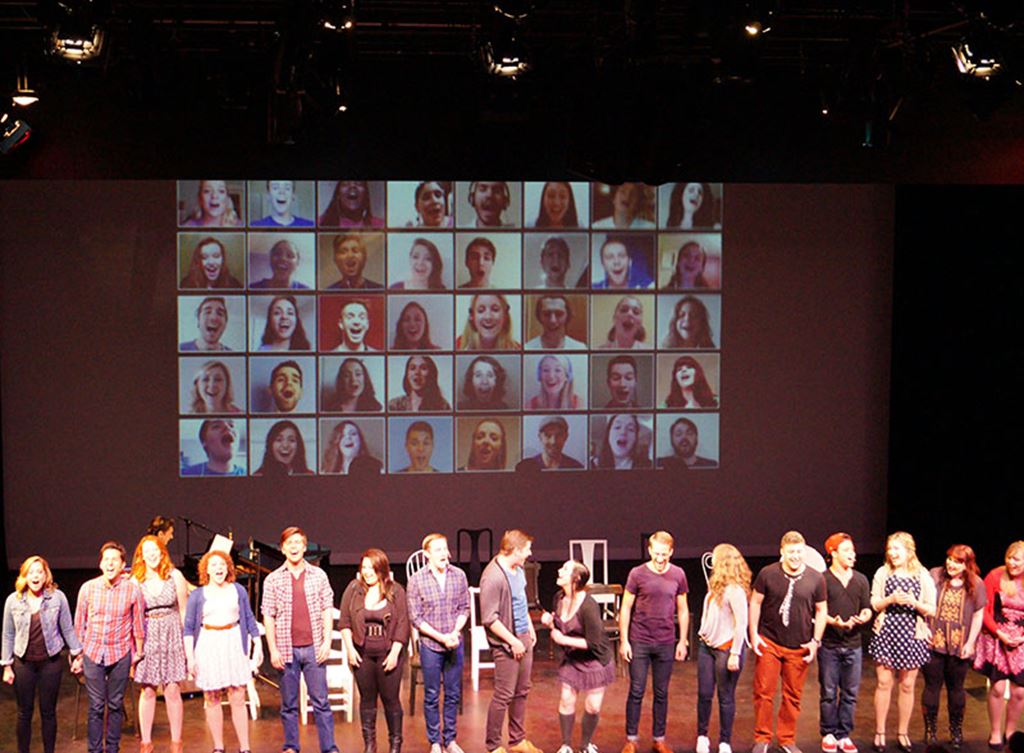 More than 75 educators in the field of music theatre gathered at Sheridan’s Trafalgar Campus in Oakville in June to take part in Song, Stage and Screen IX, the 2014 Conference of the academic journal Studies in Musical Theatre. Sheridan played host to the annual international conference that was held in Canada for the first time, and welcomed delegates to the home of its Bachelor of Music Theatre Performance Program, the country’s leading such program.

The conference focused on the theme of collaboration and featured academic papers, talks, and practical demonstrations on collaborative processes. Topics included how to develop a triple-threat performer, the praxis of collaboration, using technology to enhance collaboration, and teaching collaboration. “The art of collaboration between individuals is of vital importance within the musical theatre genre. The conference aimed to explore, uncover, and create discussion around this topic,” said Michael Rubinoff, the Conference Curator and the Associate Dean of Sheridan’s Department of Visual and Performing Arts.

In a dramatic display of the power of collaboration, conference delegates were treated to a live musical production of The Theory of Relativity, which incorporated a virtual choir of 40 individuals from Canada, the United States, Mexico, Spain and the United Kingdom. The show is a product of the Canadian Music Theatre Project, with book by Brian Hill, and music and lyrics by Neil Bartram. The live cast of 16 included Sheridan musical theatre students and alumni as well as guests from The Boston Conservatory, the University of Michigan and the Hart School of the University of Hartford. Click here to view a video of the virtual choir performance.

Conference sessions featured speakers from both industry and academia. Tony Award-winning writer Bob Martin, who co-created the musical The Drowsy Chaperone and television series Slings & Arrows provided a compelling keynote address. He spoke about his experiences as an actor and writer as well as the collaborative projects he has been a part of for three decades in Canadian theatre, film, and television.

Six Sheridan faculty members participated in paper panels and presented their academic works on musical theatre collaboration. “It’s not only an honour for Sheridan to host this prestigious conference, but it was an outstanding opportunity to showcase the talent of our faculty to an international audience,” said Ronni Rosenberg, Dean of Sheridan’s Faculty of Animation, Arts and Design. “Collaboration is at the heart of what we do in the Music Theatre Performance Program at Sheridan.”

Greg Andrews, the Head of Music Discipline at Sheridan showcased his 20-minute performance session that included himself conducting a choir, in collaboration with dancers and an animator’s work projected on a screen. His multimedia work featured the choral music of Eric Whitacre, a Grammy-winning artist. Suzanne Bennett, Acting Instructor in Sheridan’s Music Theatre Performance program presented her paper titled “Aspects of Contemporary Performance and the Postmodern Musical: Collaboration between the Theoretical and the Practical” which highlighted the importance of understanding postmodern performance before being able to perform in the genre. Bennett, along with the Head of Acting at Sheridan Marc Richard, shared their work on an experiential holistic approach to training musical theatre artists.

Faculty member Robert Gontier discussed the necessary collaboration between professor and student to workshop a new musical -- work he has been involved with through the Canadian Music Theatre Project. Jason Saunders, a Sheridan professor, shared his perspective on how music offers the unique potential for the creation of meaningful experiences and expressions of consciousness. Dr. Edward R. Sykes, a professor in applied and mobile computing, Wesley Skoczen, from Sheridan’s Office of Undergraduate Research, and Mary-Lu Zahalan, a professor of Popular Music Theory and Performance, described their case study in music performance education across two continents through the use of new technologies.

Conference delegates were also invited to attend a performance of Crazy for You at the Stratford Festival. A lead cast member in the show, Natalie Daradich, is a well-known Canadian musical theatre performer and Sheridan graduate. “It has been a great opportunity for us to showcase some of Sheridan’s homegrown talent including our students, alumni, faculty, and their work in music theatre” said Rubinoff. “We are proud to have had the opportunity to be the conference’s first Canadian host.”

Designing hope and a future at Sunrise

We asked some of our expert alumni working in human resources for their advice on acing the job hunt.

The first time Sheridan President Dr. Janet Morrison met Parmin Dhoot, she immediately recognized his potential. “I was so impressed…