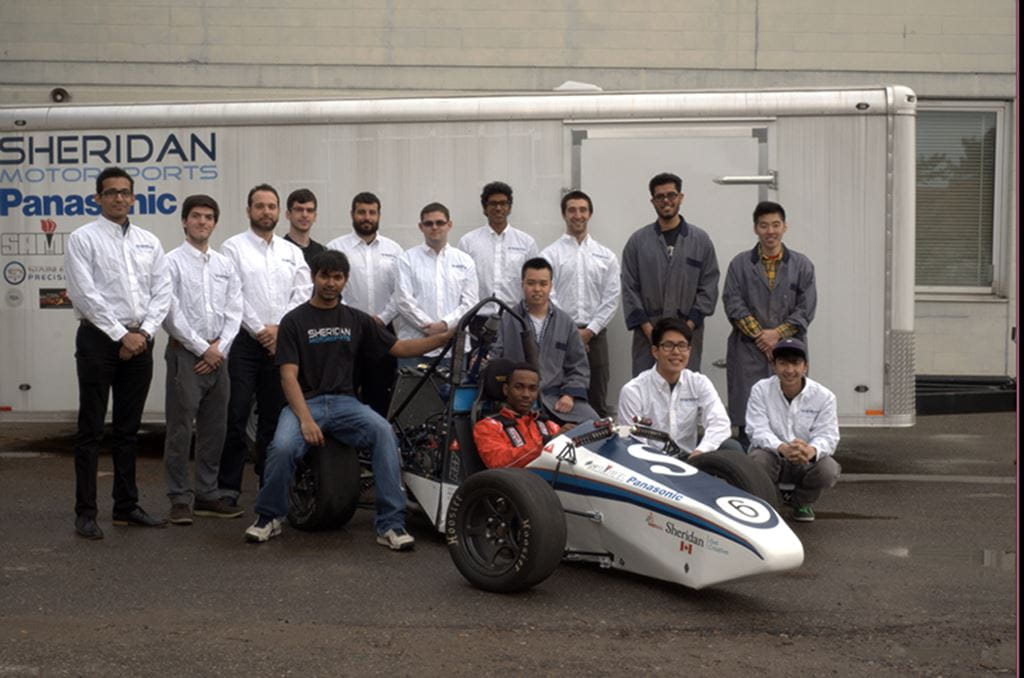 May 21, 2014
Sheridan engineering students will be putting their creative work to the test for the first time at this year’s Formula North 2014 event.  The annual competition, which takes place from May 22 to May 25 at the Barrie Molson Centre, is a comprehensive challenge to design, build and race an F-1 style race car.  While others spent the Victoria Day long weekend resting and relaxing, the Sheridan Motorsports Team was hard at work fine-tuning and testing their car in hopes of a first place victory.


Although Sheridan students have experienced this event before, this group is extra excited as it’s the first time they will be competing on a race track.  For weeks, they’ve used pylons to create a simulated track at Sheridan’s Davis Campus to practice for the competition, which involves 27 other teams representing postsecondary institutions across North America.

“We feel confident about the team and the car,” said Joseph Yang, a third year Sheridan engineering student. “We made good progress over the past week doing the final touch ups and I think the overall performance of the car has improved a lot.”

Yang, who is the group’s team captain, will be one of four drivers taking the wheel.  The car will also be controlled by Adam Arrezza, Sadiq Awosanmi and Kenneth Faria who are all studying engineering at Sheridan.   In total, there are 12 engineering students who will be lending a hand as a team during this week’s competition.

“I am very, very proud of this team and pretty confident Sheridan will have a great performance in the Formula North event,” said Dr. Shaun Ghafari, team supervisor, Professor and Coordinator of Applied Research and Industry Projects at Sheridan.  “These students are getting to experience a full cycle of the real project while improving their teamwork and leadership skills. The project is a great showcase for our school, proving the quality of the curriculum, faculty, and project-based learning environment we have at Sheridan’s School of Mechanical and Electrical Engineering and Technology.”

Sheridan’s team vehicle took two and a half years to get on the road and was built meticulously with this year’s competition in mind.  Since the cars are designed from scratch, The Formula North judges mark each entry on the thought processes and decision making around the vehicle.  Students are judged on the car’s engine, suspension, frame, driver control system, ergonomics and its overall cost.

In addition to ’static’ tests, teams will also be required to undergo a ‘dynamic’ set of assessments.  Motorcars are scored for acceleration, skid pad (which puts the car through a ‘figure 8’ to determine how well it handles corners), auto cross (where vehicles are timed on how quickly they get through the whole course), and endurance (where the car does laps for a total of 22 kilometres). Last year the team’s car had a hiccup in the engine and couldn’t be raced.  Now that the long weekend’s test runs were successful, the Sheridan Motorsport Team is optimistic about its chances.

“Our goal is to finish all of the portions of the events that involve driving the car,” said Yang.  “I feel nervous and excited.  It’s a big achievement for a rookie team to pass the endurance test and there’s a chance the car may break down – there is always that unknown factor.  But I’m excited that we are actually going to be competitive this time around.”