The competitors endured eight hours of intense competition in a variety of disciplines. In the Industrial Mechanic Millwright competition, the eight participants were given four challenges: a reduction gearbox teardown and rebuild, a coupling alignment, a precision bench fitting exercise, and a stainless steel hydraulic pipe bending exercise.
The Precision Machining competition was comprised of two challenges to produce piece parts on a vertical milling machine and a center lathe. The tolerances the competitors had to work to are extremely tight – in layman’s terms, “a third of the thickness of a human hair”.

“The skill level of this year’s competitors was very high in the IMM competition. Graham’s preparation for the competition along with his natural ability propelled him to the gold medal,” said Sheridan Professor, Craig Brazil, IMM contest chair. “Mohamed beat out 15 other competitors to win gold, and his project work was exceptional.” 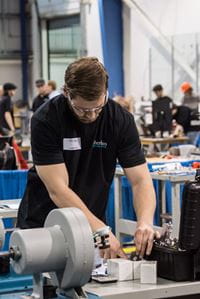 Michael Reid, Ben’s faculty advisor, said “the dedication Ben shows for his craft is very rewarding and the fruits of his labour came through in the competition.” Both Graham and Ben now move on to the 20th Skills Canada National Competition representing Team Ontario in the Industrial Mechanic Millwright and Precision Machining competitions in Toronto in early June. The Ontario Technological Skills Competition has 1,900+ Competitors, 30,000+ Spectators, 60+ skilled trade contest areas, and over 370,000 square feet of competition space.