The Academy Awards show is nearly upon us, but Sheridan is already celebrating two Sheridan graduates who have won Academy Awards for Scientific and Technical Achievement.  Tibor Madjar, a 1999 Computer Animation alumnus, was honoured for his work in developing Mudbox, a 3D sculpting software used for such films as King Kong, Avatar, Live of Pi and The Avengers.  Colin Doncaster, a former faculty member and recipient of an honorary diploma from Sheridan, received the Academy Award for his work in deep compositing, a technique that merges visual images.

Madjar and his three co-winners developed Mudbox while working on The Lord of the Rings for Weta Digital in New Zealand.  “Previously, you actually sculpted creatures out of clay, working on them for months.  Then they would be scanned into the computer and go through lots of clean-up work,” he explains.  Mudbox was purchased by Autodesk in 2007, and Madjar returned to Toronto where he founded PayProGlobal, a company that re-sells and distributes software.

Doncaster is a co-founder of Peregrine Labs, a digital media studio based out of his home in Dundas, Ontario.  He has lent his expertise to several projects for Weta Digital, including The Lord of the Rings, Avatar and The Day the Earth Stood Still – the film he was working on when he helped create the award-winning compositing technique.  The tools and techniques developed by both Madjar and Doncaster dramatically reduce the amount of time and money required to produce complex visual effects. 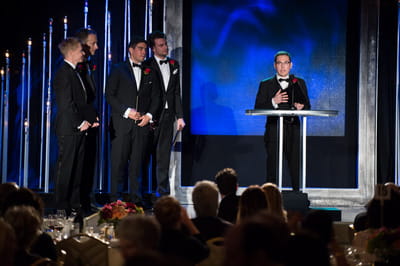 “It’s gratifying not only because the technology has been recognized, but also because of its widespread and enthusiastic adoption by the industry,” says Doncaster.

Portions of the Scientific and Technical Awards ceremony, which took place February 15, will be broadcast during the Academy Awards broadcast on March 2.  Once again, Sheridan alumni played a supporting role in this year’s Oscar line-up, with 31 graduates crediting with working on a total of eight nominated films.

Two Sheridan computer animation graduates were presented with Annie Awards, the animation industry’s highest honour, earlier this month.  Jeff Capogreco was part of the team that won for Outstanding Achievement, Character Animation in a Live Action Production for The Hobbit: An Unexpected Journey.  Capogreco is a visual effects supervisor for Weta Digital.

Andre LeBlanc was part of a DreamWorks team who won Outstanding Achievement, Animated Effects, for The Croods.  LeBlanc, who is now working independently, was at DreamWorks for ten years, producing visual effects for a number of successful animated films including How to Train Your Dragon and Madagascar.

One week after the Academy Awards, the Canadian film and television industry will celebrate its own, as the Canadian Screen Awards (CSA) are presented in Toronto on March 9.  The CSA’s honour Canadian productions and talent who excel in front of the camera and behind the scenes in film, television and digital media.  A total of twenty-five Sheridan alumni have been nominated for awards, in such categories as Best Animated Short, Achievement in Visual Effects, Achievement in Sound Editing, Best Pre-school Program or Series, and Best News Information Program.