Cisco Canada, in conjunction with Sheridan College, Fuse Marketing and Soft Gravity, would like to congratulate the winners of the President’s Innovation Challenge. Chau Le, Yee Ting Lee, Leena Salem and Jason Smith were awarded a $10,000 cash prize for devising an innovative application to be used during the Toronto 2015 Pan Am/Parapan Am Games (TORONTO 2015) to enhance the fan experience and bridge rich connections between visitors, residents and businesses.

The winning team, all students from Sheridan’s post graduate certificate program in Interactive Multimedia, was announced after an all-day Idea-A-Thon event held on Saturday, January 11 at Sheridan’s Oakville Campus. Team “Fantastic Four” beat out fierce competition from eight other rival student groups, with their idea for a Pan-Ambassadors geo-tracking application that will enable non-English-speaking visitors to TORONTO 2015 to connect in real-time with locals who speak their language.

The team will develop the app over the next year before launching it publicly in April 2015, prior to the commencement of TORONTO 2015 on July 10. The winning application will use GPS coordination and technology to show visitors the real-time locations of people throughout Toronto and neighbouring municipalities who have agreed to be “Pan-Ambassadors” and allow them to connect instantly. The aim of the app is to provide visiting attendees convenient access to local knowledge and advice in order to greatly enhance their experiences of the games and the municipalities hosting the sporting events.

It is also hoped the new app will enrich the experiences of TORONTO 2015 volunteers who agree to be Pan-Ambassadors, by giving them the opportunity to interact more closely and more meaningfully with attendees. There are approximately 20,000 volunteers scheduled to aid in TORONTO 2015 who will be approached to participate. Local businesses will be encouraged to donate prizes to reward Ambassadors and gain valuable exposure.

In total, nine teams devised and pitched their ideas during the Idea-A-Thon. The students were aided throughout the day by roving and dedicated teams of mentors, made up of representatives from Cisco, Sheridan, Soft Gravity, Fuse Marketing, and TORONTO 2015. The top five ideas were presented to a panel of three judges.

A People’s Choice Award was given to students Kaye Mao, Ali Tayyebi, Deron Li, and Riley Co, all first year students in Sheridan’s Bachelor of Interaction Design degree, for their idea of an interactive fan application that would help to drive positive behaviour among athletes. The app would allow fans to vote on categories such as favourite athlete, most sportsman-like, and most likeable athlete, which would be displayed on interactive touch screens at the venues. 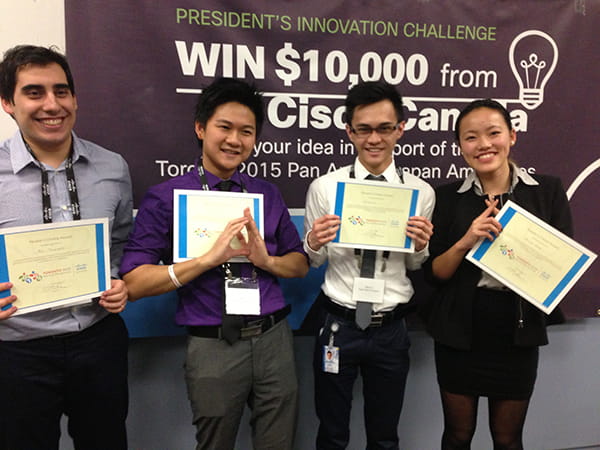 The students hoped that lesser-known athletes would be able to make use of the data to enhance their potential for securing future sponsorship deals, as it would help prove their clout as fan favourites. The app would also enable people attending sporting events to vote by shaking their mobile phones en masse during an event, which would trigger a wireless data transfer that would generate cheering over the loud speakers. The team hopes that one day, this kind of app might even get picked up by professional sporting associations like the NHL or the NBA. The People’s Choice Award was selected based on votes that were cast over social media channels as well as by the attendees who were present.

“I am incredibly proud of all the students who answered the call and participated in the Challenge. The response we’ve had has been overwhelmingly positive, and the ideas and dedication seen here today are a testament to the passion Sheridan has for creativity and innovation. We often speak about nurturing the next generation of Canada’s professionals and here’s proof that today’s students can and will make a positive impact in our lives as we will all witness come TORONTO 2015.”

“Truly, everyone who participated today was a winner. We heard some genuinely fantastic and creative ideas and having to choose a single winning team was very hard. Ultimately we chose the team that presented the best opportunity for visitors, fans and businesses to truly connect in an enriching and positive manner. Cisco looks to foster Canadian innovation, especially within youth, college and business entrepreneurs, and it was a thrill to see that mandate come to life.”

About the Toronto 2015 Pan/Parapan American Games

Sheridan College is one of Canada’s leading postsecondary institutions, offering over 100 diploma, certificate, and bachelor degree programs in an environment that fosters innovation and creativity.  Its aim is to become Ontario’s first university exclusively dedicated to undergraduate professional education – a model that will be based on applied learning and Sheridan’s renown for creativity and innovation.  The model also focuses on meeting university accreditation requirements so that Sheridan graduates have more pathways to the continued learning that will underscore their personal, career, and industry success.

Cisco (NASDAQ: CSCO) is the worldwide leader in IT that helps companies seize the opportunities of tomorrow by proving that amazing things can happen when you connect the previously unconnected. Cisco products and services are supplied in Canada by Cisco Systems Canada Co., a wholly owned subsidiary of Cisco Systems, Inc. For ongoing news, please go to http://thenetwork.cisco.com and http://newsroom.cisco.com/canada.