Over 300 attend lecture by one of the world's foremost experts on aging.

Over 300 people gathered at Sheridan College on September 6, 2013 to celebrate the 10th anniversary of the founding of the Sheridan Elder Research Centre (SERC).  The highlight of the event was a free public lecture by one of the world’s foremost experts on global aging and age-friendly cities, Dr. Alexandre Kalache, who discussed the challenges and opportunities related to something he termed the “longevity revolution.” 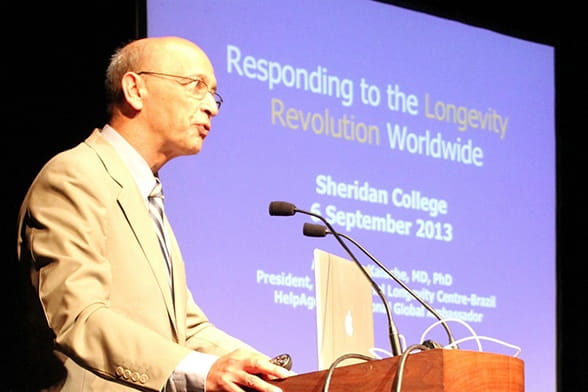 At What Age Will You Die?

Kalache opened his lecture by asking the audience to imagine at what age they would die.  With the majority answering over 80 or even 90 years old, he made the point that this notion would have been unthinkable several decades ago.  Over the past 100 years, worldwide life expectancy at birth has increased by at least 30 years and the total fertility rate has decreased dramatically.  There are 87 countries today with fertility rates below replacement levels.  Thirty years ago, there were only 20 such countries. By 2050, the world’s population over the age of 60 will be equivalent to the total population on the planet when most people attending the lecture were born.  “What a privilege we have to experience living through this revolution and shaping the response,” he said.

Shifting our Mindset about Life Course and Aging

According to Kalache, that response will largely be shaped by the baby boomers, which he characterized as a very special generation because of their impact on every aspect of society from the sexual revolution and the emancipation of women to the fight against racism and homophobia.  In the same way that this generation created a new social construct – adolescence – because it was the first generation that didn’t need to work to feed itself, he suggested this generation will define what it means to be a “gerontolescent” – a new stage in life that will last for two-three decades.

Part of the challenge lies in the fact that “we’re trapped in a mind frame of the 1970s,” said Kalache, when it comes to our ideas about work, education, caregiving and retirement.  “Now when you retire, it will be for 30, 40 or 50 years.  What can you do for that long if you have little income?” he asked.

For Kalache, part of the answer is to create solid foundations for thinking about aging.  “I believe frameworks are important – they are mental structures through which we can examine society.  Without a framework, it is hard to see.”  Kalache highlighted the World Health Organization’s Active Ageing Policy Framework, launched in 2002, an initiative created under his leadership and with the involvement of many.  “It was the first time an international document put the rights-based approach up front.  Yes, older people have needs, but above all, we have rights.”  The document defined active aging as a process throughout the life course, in which society must optimize opportunities for health, participation, and security to enhance quality of life as people get older.

How Will You Die?

Kalache then paused to ask the audience to imagine what would be their cause of death.  While few wanted to imagine dying from lengthy or independence-robbing illnesses such as Alzheimer’s or stroke, he reminded the audience that non-communicable diseases are on the rise. Beyond controlling for common risk factors, he said we must possess self-efficacy and resilience, self-esteem (“how can you live well if you don’t have it?”), and a sense of humour because “it will draw people to you, especially when you need them most.”

He continued the presentation by saying that the policies that society needs to confront and manage the longevity revolution centre on allowing people to reach the peak of their functional capacity, helping them regain a slower pace of decline, and ones that go beyond prevention and treatment to address our need for care.

Where Will You Die?

To stress this point, Kalache asked the audience to imagine the setting of their death.  While few hands rose when he asked if people thought they would die on the street, and the overwhelming majority felt they would die at home, Kalache joked that the audience was living in denial and suggested that in reality, many of us are going to die in institutional settings – places where we might live for a long time.

Kalache then outlined four dimensions of care – self-care, informal care by family and friends, community care (one’s primary health care team) and institutional care.  On this point, he challenged the conventional wisdom of putting the bulk of health care dollars into institutional care and not investing more in the other dimensions, which might help prevent people from ending up in institutions. He added that a cultural shift is needed.  Men must participate more in informal caregiving. Developed countries must also provide higher salaries for paid caregivers to encourage their own citizens to take these jobs rather than rely on people from developing countries to fill them, which he says amounts to “the south subsidizing the north.”

An additional challenge is respecting diversity.  “We talk about ‘the elderly’ – that box where everyone over 60 fits – but we don’t think about the differences in terms of gender, status, nationality, age, culture, ethnicity, religion, sexual identity . . . I am in the same box as my mother who is 98 . . . if you have decades to accumulate life course experience, you are going to be much different from people at other ages.”  To express solidarity and create better physical and social environments in which people can age well in all corners of the world, the World Health Organization implemented the Age-Friendly Cities initiative, another brainchild of Dr. Kalache.

The project grew out of a desire to more closely reconcile researchers’ ideas with the lived experience of people who are aging. First presented as a keynote address at an International Congress of Gerontology, the idea has since become an international movement that has been adopted by over 1,200 cities.  Cities are using the guide to create age-friendly cities that take into account dimensions such as transportation, health, respect, social inclusion, civic participation, and employment. The guide encourages a bottom up approach, which listens to voices of older people as protagonists and which facilitates a multi-dimensional, top down response from policy makers.

How Will You Celebrate Your 85th Birthday?

Kalache ended his talk by reiterating the importance of a rights-based approach to aging.  While some envisioned celebrating their 85th birthday by doing something they’ve never done before or taking a trip to a foreign country, Kalache joked that it might be next to impossible to get insured.  “We are curtailing opportunities for people to have dreams as they grow older . . . this is not the way to respond to the longevity revolution. We are taking away your right to live your life the way you decide.”

He continued by saying that this approach implies the right to health, learning, work, protection, participation in society, access to services and the right to stop and rest.  “In developing countries, 80% of elderly people don’t have a basic income – if they stop working they stop eating.”  Part of the response will come from fostering and nurturing inter-generational relationships. He also challenged Canadians to take a leadership position in an untapped area.   “The research community that looks at migration has ignored aging and vice versa,” he said.  “In aging, we long for what we have left behind. I call this aging in a foreign land.”  Kalache praised SERC for conducting this type of qualitative research, which he said has taught him more than has quantitative data, despite his career as an epidemiologist.

Kalache summarized his lecture by saying, “the increasing presence of more older persons in an increasingly urbanized and globalized world shows for me the importance of changing the paradigm – developing a culture of care that will occupy a central place in society . . . a culture that respects diversity, promotes solidarity between rich and poor, men and women, all social classes, the developed and developing world and above all, between young and old.  That is the response to the longevity revolution and so often we forget that.”

At its Davis Campus in Brampton on June 6, Sheridan announced a new partnership with Patheon Inc., a world-leading pharmaceutical company with locations in Mississauga and Whitby.