MERRILY WE ROLL ALONG opens at Theatre Sheridan

Featuring the music and lyrics of Stephen Sondheim, and guest-directed by Richard Ouzounian

The graduating class of Sheridan’s esteemed Music Theatre – Performance program cap off their year with a production of Merrily We Roll Along, guest-directed by Richard Ouzounian, theatre critic for the Toronto Star.  The show premieres tonight, and runs until April 20 in Macdonald-Heaslip Hall at the Trafalgar Road Campus.  Tickets are available from the Box Office at 905-815-4082, or online at theatre.sheridancollege.ca.

The show features 29 students from the graduating class, with costumes, props and set designed and produced by students in the Technical Production for Theatre and Live Events program.  For a behind-the-scenes look at how this production came together, please click here. 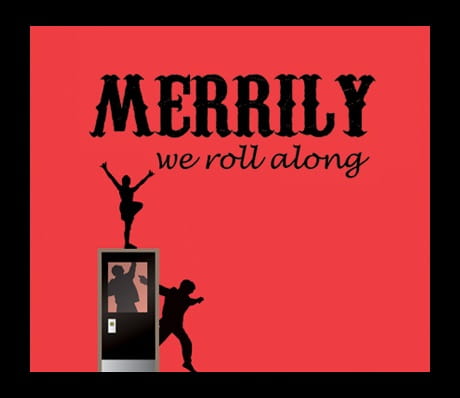 Written by George Forth, with music and lyrics by Stephen Sondheim, Merrily We Roll Along begins in the present and moves backwards, tracing the lives of wealthy, jaded composer Frank Shepard and his two estranged friends, Charley and Mary. Three best friends at the start of their careers face a bright future: young, talented and enthusiastic about the worlds waiting to be conquered. This friendship will be contested during their 20 years of personal and professional milestones, ambition and fate. With a brilliant Broadway- style score and that deep insight one expects from any Sondheim endeavor, Merrily We Roll Along is a spirited and moving cautionary tale for anyone who has ever pursued a dream.

Long recognized for excellence in music theatre performance and technical theatre production, Sheridan College offers an innovative learning environment celebrated for academic excellence, applied research and creativity. Alumni perform on stages and work backstage in theatres across the world including on Broadway, in London’s West End and at the Stratford Shakespeare and Shaw Festivals. Theatre Sheridan presents six musicals a year at the Trafalgar Road campus in Oakville. Visit theatre.sheridancollege.ca and follow us on Twitter at twitter.com/theatresheridan for more information.