No matter what the sport, if there is head-to-head competition between two teams, the one that can dictate how and where the game is played, is most likely to find success.

In the case of the Sheridan Bruins men's soccer team, they found a style that worked for them -- monopolizing control of the ball, waiting for their opposition to give them openings and then attacking -- and they emerge from their OCAA indoor season as champions, defeating Seneca 1-0 in the semi final and Humber 3-0 in the championship game.

"Today we came out a little flat in the first game against Seneca, but I thought in both games we picked it up and ended up playing well," head coach Andrew Seuradge said. "In terms of ball control, we were able to keep possession for the most part in both games. In the finals against Humber, we were able to stick with our style, it worked well and that's why we have this gold."

Sheridan got their first goal nearing the mid-way point of the first half, as a shot from outside the box was nearly deflected out of play over the goal line, but Molham Babouli saved it from going out by re-directing over his head and back into the area where David Velastegui was able to volley it home for the one-time finish.

The score would remain that way at the half, but the Double-Blue would start applying more pressure early in the second half as Manny Morgado and Kevin McIntosh both had good looks at goal from just outside the box that sailed wide.

Morgado would end up supplying an insurance marker a short time later though, as he beat the Humber keeper to a loose ball and it deflected into the net. 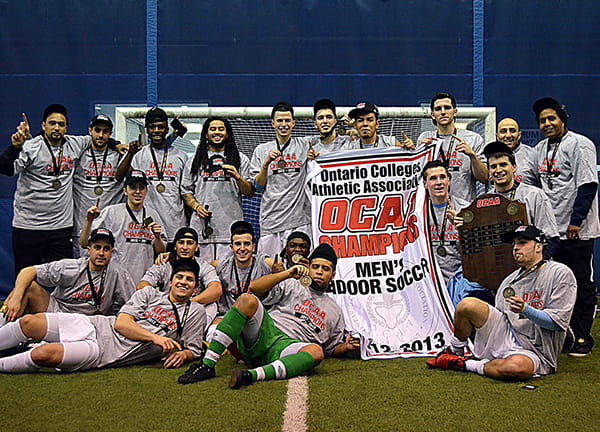 "It feels great. We had a great tournament all around and the boys came out hard to play today," said captain David Velastegui, who was also named tournament MVP. "We played with heart, we played a good possession game in keeping the ball and we capitalized on our chances."

While many would have given up on the play that led to the opening goal, Velastegui says it was just a matter of him and Babouli -- who was also named a tournament all-star -- not giving up on the play.

"Mo and I have good chemistry playing together and it's always important to follow-up on the play, because you never know what the outcome is going to be," he said. "So I was there at the right time, the right moment and I just finished the ball."

Things were a bit more tense in the semi final, as there was no score at the half and it wasn't until the mid-way point of the second half that the Bruins pulled ahead.

With Seneca having just taken a penalty to give the Double-Blue a two-minute powerplay, the ball was worked around to Morgado, who rifled a shot from just outside the area on the right, finding left-hand corner.

The Bruins found themselves in the medal round after winning Pool B with a 2-1 record. Their opening wins against Fleming (1-0) and Fanshawe (3-2) put them in a position where they had top spot secured, so their result in their final game -- a 7-1 loss to Centennial -- was inconsequential.

The game capped the Sheridan careers of a pair of fifth year players in Costa and Brandon McKinlay and Seuradge was certainly happy to send them out on a winning note.

"I think it's a great way for them to end their careers," he said. "For guys like Costa and Brandon, who have been here for four or five years, to end on a gold medal championship is great and to do so in a game against our rivals, too."

Blue notes: It's been a banner indoor season for the program, as they won three of the four invitational tournaments they were in -- Centennial's, Conestoga's and their own Sheridan Invitational -- before finishing first in both stages of OCAA group play. Over a five year period between the fall outdoor and spring indoor season, the Bruins have amassed nine total medals, having won two indoor titles, been runner-ups five times (three outdoor, two indoor) and claimed two bronze medals (one each in outdoor and indoor). The only time in that period they haven't been on the podium was the 2009 outdoor season, when they failed to qualify for the post-season.