Come from Away to be featured at Goodspeed Festival

Sheridan is pleased to announce that COME FROM AWAY, a new musical that received its debut reading at Theatre Sheridan in 2012 as part of Sheridan’s Canadian Music Theatre Project, is being featured at Goodspeed Musical’s 8th Annual Festival of New Artists in East Haddam, Connecticut, on Saturday, January 19, 2013.

The Goodspeed Opera House is one of America's most prestigious regional theatres. Their Festival of New Artists attempts to nurture and find the next big hit. “It is a badge of honour for an artist to be invited to participate,” says Michael Rubinoff, Sheridan’s Associate Dean of Visual and Performing Arts.

The Canadian Music Theatre Project was launched last year by Theatre Sheridan. It is Canada’s first incubator for the development of new musical theatre works by Canadian and international composers, lyricists and book-writers. “Creating a permanent headquarters for the development of new musicals was a culturally significant undertaking for Canada”, says Rubinoff. “As Canada’s largest art school, it makes sense for us to take a proactive approach as the country’s centre for fostering creativity and the generation of new work.” Students in Sheridan’s renowned music theatre performance program work with the composers to bring their play to life by reading and singing the musical through a series of workshops over the course of a six week period. COME FROM AWAY was one of the first musicals workshopped as part of the Project. 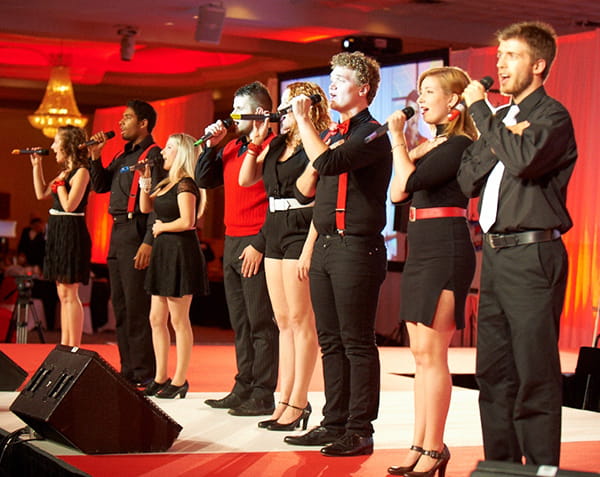 COME FROM AWAY, written by David Hein and Irene Sankoff, is based on the true story of when seven thousand people landed on the doorstep of Gander, Newfoundland on September 11, 2001, doubling its population in an instant. While the world witnessed the worst acts of humankind, the stranded passengers had their faith in humanity restored by the spirited people who comforted those who had ‘come from away’. “Having the opportunity to work with a Canadian school and close to home was a huge advantage in the development process,” says Hein. “As a Canadian, understanding our role in the 9/11 crisis response gives all of us a sense of pride about our country and our culture. While these students may not remember the horror surrounding this event, they certainly know what being a Canadian means and were able to bring that Canadian sensibility to life in COME FROM AWAY.”

Long recognized for excellence in music theatre performance and technical theatre production, Sheridan College offers an innovative learning environment celebrated for academic excellence, applied research and creativity. Alumni perform on stages and work backstage in theatres across the world including on Broadway, in London’s West End and at the Stratford Shakespeare and Shaw Festivals. Theatre Sheridan presents six musicals a year at the Trafalgar Road campus in Oakville. For more information, visit www.shericancollege.ca.

Dedicated to the preservation and advancement of musical theatre, Goodspeed Musicals produces three musicals each season at the Goodspeed Opera House in East Haddam, Conn., and additional works at The Norma Terris Theatre in Chester, Conn., which was opened in 1984 for the development of new musicals. The first regional theatre to receive two Tony Awards (for outstanding achievement), Goodspeed celebrates another milestone, its 50th Anniversary, in 2013. In addition to the two theatres and production facilities, Goodspeed maintains The Scherer Library of Musical Theatre and The Max Showalter Center for Education in Musical Theatre.