Canada's renowned music theatre performance program at Sheridan College has once again trained and graduated theater professionals who are about to open in a major Broadway production. As Canada's largest arts college, Sheridan graduates have a distinguished track record of performing in major musical and dramatic theater, film and television productions in the United States and around the world.

When the current Broadway production of Jesus Christ Superstar opens on Thursday, March 22, the cast will include a number of Canadians who were in the original Stratford Shakespeare Festival production. Three of the actors share a common background in their training and join a considerable number of other Sheridan College graduates who are building international careers and working on Broadway.

Actors Chilina Kennedy (Mary Magdalene) and Aaron Walpole (Annas) will make their Broadway debuts on March 22 in Jesus Christ Superstar. Fellow Sheridan graduate, Mark Cassius (Matthew/High Priest) adds a third Broadway credential to his resume following his debut in Ragtime (original company) and the revival of Shenandoah. All three graduated from the Music Theatre Performance Program at Sheridan College. Even for Sheridan College and all of the previous achievements of its alumni, having three graduates in the same Broadway production is a new milestone. 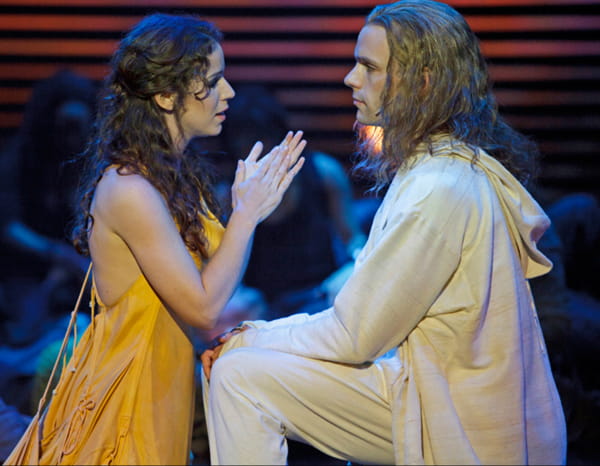 Sheridan College offers the most significant Music Theatre Performance Program outside of the United States that is training musical and dramatic actors who are acting on Broadway and in productions throughout the United States and Canada.

Since the formation of the Music Theatre Performance Program over forty years ago, a significant number of graduates have appeared in major theatrical productions around the world. A complete list is available upon request. Significant professional achievements of Sheridan graduates include:

Scott J. Campbell (2007 Sheridan graduate) debuted on Broadway in the cast of Jersey Boys and is currently starring in the first U.S. Tour of American Idiot in the role of Tunny

ABOUT the three Sheridan graduates appearing in Jesus Christ Superstar

At 10 years of age, Aaron was introduced to musicals through the film of Jesus Christ Superstar. By the end of “Heaven On Their Minds,” he turned to his mother and said, “That’s what I want to do!” It means everything to him that JCS is his Broadway debut as it’s the show that began his short, yet full career. Find more details at www.aaronwalpole.com
Training: Sheridan College Music Theatre Performance Program, Class of 2001

Broadway: Ragtime (Original Company), Shenandoah (Revival 1989). Other Selected: The Grapes of Wrath, My One and Only and Oklahoma, Joseph and the Amazing Technicolor Dreamcoat, Showboat, Cats. Miss Saigon, Dreamgirls, Sweet Charity. Member of a cappella group, The Nylons (1997-2005). “Ever grateful for the endless possibilities.” www.markcassius.com Training: Sheridan College Music Theatre Performance Program, Class of 1985.

Long recognized for excellence in music theatre performance, Sheridan College serves over 17,000 full-time students at campuses in the Greater Toronto Area, including Brampton, Mississauga and Oakville. Sheridan offers an innovative learning environment celebrated for academic excellence, applied research and creativity. In October 2011, Sheridan College announced the establishment of the Canadian Music Theatre Project (CMTP). The CMTP is Canada’s first incubator for the development of new musical theatre works by Canadian and international composers, lyricists and book-writers. The Music Theatre Performance Program at Sheridan College is overseen by Michael Rubinoff, an accomplished producer and impresario and former commercial real estate and entertainment lawyer. He was appointed Associate Dean of Visual and Performing Arts in the Faculty of Animation, Arts and Design at Sheridan College in September 2011. Sheridan College is a member of the National Alliance for Musical Theatre. Visit theatre.sheridancollege.ca

Jesus Christ Superstar is the ground-breaking rock opera by Andrew Lloyd Webber and Tim Rice, which reinvented musical theatre for the modern age and tells the story of the last week of Christ’s life. The score includes such chart-topping songs as “I Don’t Know How To Love Him,” “Everything’s Alright” and “Superstar.” Directed by Stratford Shakespeare Festival’s Artistic Director and 2-time Tony Award winner Des McAnuff, Jesus Christ Superstar opens March 22, 2012 at the Neil Simon Theatre (250 West 52nd Street).

How can I help? During the COVID-19 pandemic, it’s a question that comes through Sheridan’s digital channels almost daily. In…

Driven by his own experiences of anti-Black racism, Travonne Edwards (Child and Youth Care Worker ‘14) is researching the overrepresentation of Black families in the child welfare system to dismantle the racial disparities for Black children.