Jon Klassen, a 2005 graduate of Sheridan's animation program, was presented with the Governor General's Literary Award for illustrating Cat's Night Out, a children's story by Caroline Stutson.

The Governor General's Literary Awards are presented annually to the best English-language and best French-language books in seven categories.  Winners receive a cash prize of $25,000. 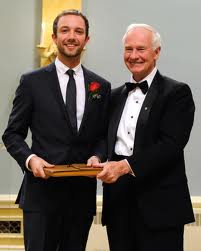 Jon Klassen and David Johnston, the Governor-General, at Rideau Hall in Ottawa

Klassen, who grew up in Niagara Falls and moved to Los Angeles after attending Sheridan, has worked on a number of book and art collaboration projects.  He has also worked on a number of high profile film and animation projects, including Tim Burton's Coraline and the U2 music video I'll Go Crazy If I Don't Go Crazy Tonight.  He co-designed a TV spot for the BBC's coverage of the 2010 Vancouver Olympics, which was nominated for a BAFTA award (British equivalent of the Oscars).

Meet the Sheridan alumnus bringing Batman into a new era

As the new lead writer for Batman, Chip Zdarsky (Illustration '00) wants to explore the superhero’s weaknesses