The Sheridan School of Business took the Gold Cup Award for overall first place at OCMC 2010.

The Sheridan School of Business took the Gold Cup Award for overall first place at OCMC 2010, winning four Gold Awards, two Silver Awards, three Bronze Awards and one 4th place standing in a field of 13 competing colleges at the 31st annual Ontario Colleges’ Marketing Competition.  This year's event was held at the Delta Meadowvale in Mississauga, and hosted by Sheridan College. 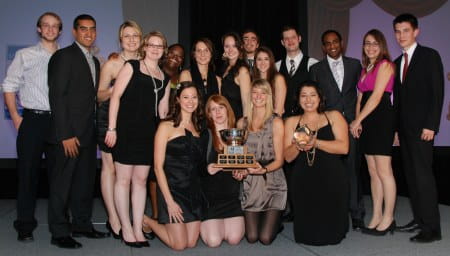 In all, the 18 member Sheridan Business OCMC team won nine awards and placed in the top five point-categories in 9 of the 11 competitive events, taking an unprecedented 69 points overall.

So Far From Home premieres on OMNI September 27

The world rarely sees the challenges and dangers faced by native reporters reporting from conflict regions...

SheridanCorporate and the Oakville Chamber of Commerce announce a new partnership to help Oakville businesses compete...