When her Majesty, Queen Elizabeth II visited Pinewood Toronto Studios today, she was treated to a demonstration of the latest in 3D production processes by Sheridan’s Screen Industries Research and Training Centre (SIRT), which is housed at Pinewood. 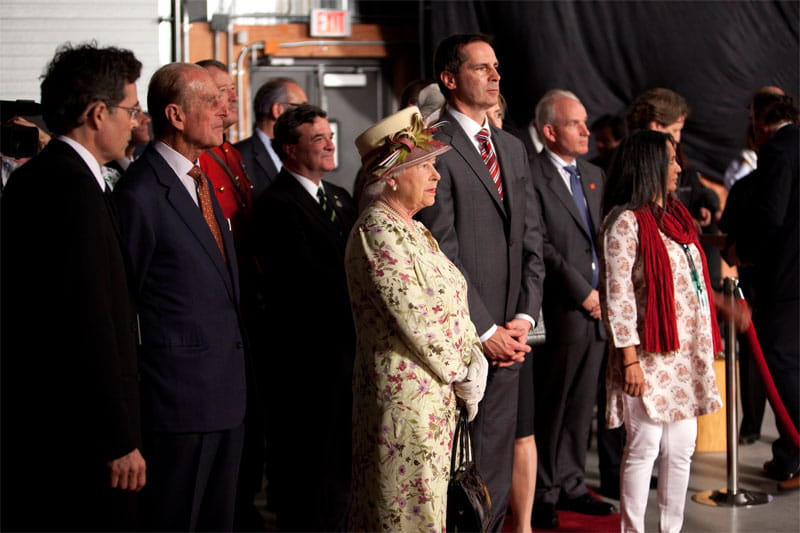 Her Majesty The Queen Visits Pinewood Toronto Studios / SIRT Sheridan Her Majesty viewed the live action filming of a scene directed by award-winning director Deepa Mehta.  Developed by one of Ontario’s top film and television production companies, the sce
ne was shot in stereoscopic 3D by a combined group of industry veterans from Ontario’s internationally-renowned unions and guilds working together with faculty, student and SIRT staff researchers.


The event featured both locally developed technologies for use in stereoscopic production as well as state of the art international technology provided by a wide variety of Ontario-based technology and service companies.  It served as a demonstration of SIRT’s mission to facilitate collaboration within the industry that will help drive integration of new technologies into production and post-production processes.

"This was a great opportunity for Sheridan to showcase the power of collaboration to deliver truly innovative results,” says Jeff Zabudsky, Sheridan’s President and CEO.  “In a very short period our partnerships with industry and academic partners such as the University of Waterloo have already achieved impressive results, and SIRT is just getting off the ground.  The future looks bright in terms of what we can do to support the Ontario film, television and gaming industry’s competitiveness in the years ahead."

Sheridan College’s new Screen Industries Research and Training Centre (SIRT) at Pinewood Toronto Studios is a unique academic-industry collaboration serving Ontario’s screen-based industries.  Initially funded by the Ontario Media Development Corporation and the Natural Sciences and Engineering Research Council of Canada, the Centre received further major funding in March 2010 from Ontario's Ministry of Research and Innovation as part of a joint research excellence grant shared with the University of Waterloo’s Institute for Computer Research.  The two institutions were awarded $4.9 million, with total funding, including contributions from both educational institutions and private industry partners, of $14.7 million over five years.  SIRT’s initial project with 3D Camera Company was funded through Ontario Centres of Excellence.

Research, innovation, commercialization, and knowledge dissemination/training at SIRT will focus on providing Ontario's production companies and creators with technological innovations and best practices that will help them produce content for multiple types of delivery including film, television, gaming, interactive, and mobile.

SIRT will facilitate collaboration among faculty and student researchers from Sheridan, Waterloo, other Ontario universities and colleges, and industry partners, including Ontario’s major unions and guilds.  Waterloo's computer expertise combined with Sheridan’s production expertise and innovation will support the development of technologies and practices that will provide a strong competitive advantage to Ontario's screen-based industries.  Visit www.sirtcentre.com for more information.

About Sheridan:
The Sheridan Institute of Technology & Advanced Learning provides students of all ages with the knowledge and skills to thrive in a rapidly changing world. We serve 16,000 full-time and 35,000 continuing education students at our campuses in Oakville and Brampton, with a new campus slated to open in Mississauga in 2011. Sheridan offers an innovative learning environment celebrated for academic excellence, applied research and creativity. Program options range from one-year certificates to four-year Bachelor’s degrees, in the arts, business, community service and technology fields. We prepare students for career success; 88 percent of graduates are employed within six months of graduation.