Dr. Jeff Zabudsky welcomed as 6th President of Sheridan Institute of Technology and Advanced Learning in its 42 year history 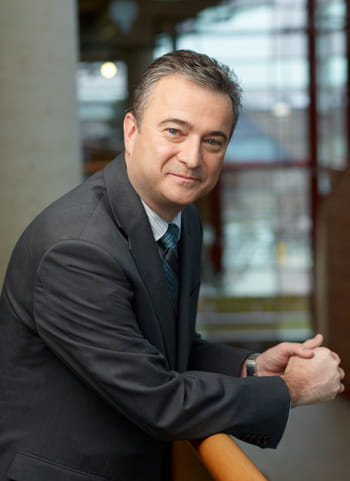 Dr. Jeff ZabudskyDecember 7, 2009 – Oakville/Brampton/Mississauga – Dr. Jeff Zabudsky, an accomplished educator and college executive, has been named President and CEO by the Board of Governors of Sheridan Institute of Technology and Advanced Learning. He will take office on February 1, 2010. He succeeds Dr. Robert Turner, who is retiring after leading Sheridan since 2001.
Sheridan is one of Canada’s most unique educational institutions. It lies at the forefront of innovation in digital media and the arts, and plays key roles in business, technology and liberal arts education. Its new “Shine Brighter” marketing campaign reflects Sheridan’s deep commitment to graduate success and employer satisfaction through providing a progressive, holistic, high-quality education for its 16,000 full-time and 35,000 part-time students.

“We’ve found an accomplished leader to take on the responsibility of shaping Sheridan’s future at this important time,” said Michael Cloutier, Chair of Sheridan’s Board of Governors and President and CEO of Critical Outcome Technologies Inc. “Jeff is an outstanding choice as Sheridan’s next president. He impressed us with his leadership and vision, his commitment to student-centred learning, support of applied research and experience in fundraising. As Sheridan develops its Creative Campus concept and reignites its digital learning environment, we look forward to the successes that lie ahead with Jeff as our President and CEO.”

Zabudsky comes to Sheridan having served as President and Chief Executive Officer of Manitoba’s Red River College since 2004. Red River College is Manitoba’s largest institute of applied learning with over 32,000 students at eight campuses and over 110 full-time programs. Zabudsky brings almost 25 years experience in post-secondary educational administration and in educational broadcasting. He is a tireless advocate for the critical role colleges play in the Canadian economy.

“I’m elated by the opportunity to join Sheridan and play a part in the success of one of Canada’s most exciting and well-known colleges – particularly at such an important time for Sheridan. With its continual growth and imminent expansion into Canada’s sixth-largest city, Mississauga, Sheridan is poised for an even brighter future,” said Zabudsky. “I'm a firm believer that it's the combination of applied and theoretical learning that makes Sheridan such an important part of our educational system. That’s a message I plan to carry forward as I take on this new challenge and build on the strong relationships Sheridan has forged with the communities it serves.”

Jeff holds a PhD in Educational Policy Studies from the University of Alberta, a Master’s Degree in Distance Education from Athabasca University, and a Bachelor of Applied Arts Degree in Broadcast Journalism from Ryerson University.