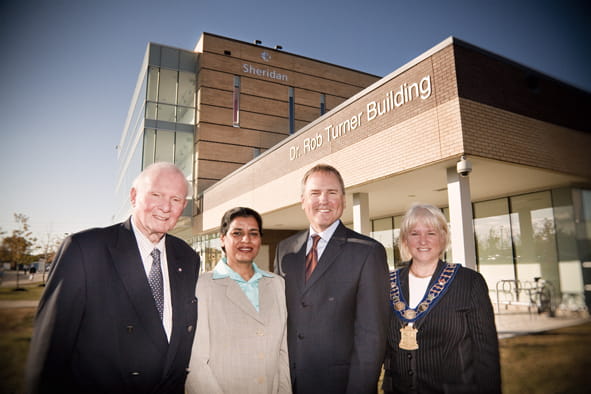 Brampton’s political leaders gathered yesterday at Sheridan’s Davis Campus to pay tribute to outgoing Sheridan President, Dr. Rob Turner. The occasion was a dedication ceremony during which a building on the campus was named the “Dr. Rob Turner Building.”

Dr. Turner, who will retire from Sheridan at the end of the year, accomplished much during his eight-year tenure as President and CO. Under his leadership, Sheridan achieved the following:


Amrit Mangat, MPP for Mississauga-Brampton South, extended thanks to Dr. Turner, on behalf of the Government of Ontario, for his dedication to Sheridan. Mayor Susan Fennell noted that “Today, Sheridan is one of the most talked about features of our city,” particularly with the Davis Campus’s expansion in recent years. The Honourable William G. Davis, for whom the Davis Campus is named, praised Dr. Turner’s contributions, saying “I’ve always been proud of what you’ve done for Sheridan, and particularly the Davis Campus.”

About Sheridan Institute of Technology and Advanced Learning

Sheridan’s mission is to provide students of all ages with the knowledge and skills to thrive in a rapidly changing world. We annually serve 15,000 full-time and 35,000 continuing education students at our campuses in Oakville and Brampton, Ontario. Sheridan offers an innovative learning environment celebrated for academic excellence, applied research and creativity. Program options range from one-year certificates to four-year Bachelor’s degrees, in the arts, business, community service and technology fields. We prepare students for career success; 88 percent of graduates are employed within six months of graduation.