Alumna blends talent and determination to pursue her passion

The odds have always been up against Deanna Molinaro.

At birth, she was diagnosed with Epidermolysis Bullosa (EB), a genetic condition that affects only 1 in 17,000 babies born in Canada. EB occurs when one of the 16 proteins that binds layers of the skin is defective, and it varies in severity, affecting each person differently. Molinaro’s condition is labelled recessive dystrophic, which describes how it was inherited, and its severity. Molinaro lacks collagen number seven – the fibres that act like the body’s glue to bind the skin together and give it its elasticity. Without it, blisters form at just the slightest touch.

Growing up, regular childhood growth patterns caused severe trauma for Molinaro, leading the skin on her hands to fuse together. By age 10, the pain caused by friction just from standing meant she needed to start using a wheelchair. Today, the 27- year-old says even the simple act of holding a paintbrush can cause blisters that are equivalent of those of third-degree burns. 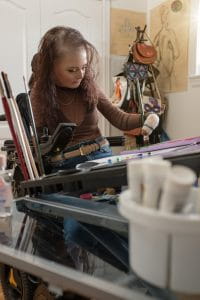 But Molinaro has never let EB stop her. As a child, she realized art gave her a way to take part in extracurricular activities like other kids. Once she discovered her talent, it became a way to share her perspectives and positivity with the world. Creativity also became a way to cope with the stresses of life with EB.

“When I’m painting …it’s just like a nice moment to myself and to lose myself in the actual task of the paint and the brush,” she says. “It’s almost like a meditative state.”

Over the years, Molinaro has done whatever it takes to keep painting. Childhood surgeries forced her to become ambidextrous. When she realized she needed more stability to hold a paintbrush, she began using thick rubber bands to attach the brush to her hand.

Starting in Visual and Creative Arts at Sheridan brought new challenges. How to cope with notetaking and in-class art projects? How to balance school alongside the hours needed for wound dressing changes every day? Her professors and staff at the Accessible Learning centre were instrumental in finding solutions. They added accessibility features to her laptop, made arrangements for an aide to accompany her to class, and adjusted her timetable to accommodate the hours she needed for self-care.

But Molinaro’s greatest test came just as she was finishing her third year in 2017. That April, during one of her regular medical appointments, her dermatologist noticed a change in her skin. It was cancer, and it was developing in her right hand – her dominant side for painting. Molinaro had to make a choice: keep her arm and pursue less aggressive treatment, or have it amputated just below the elbow to stop the cancer from progressing. In June, she underwent the life-saving surgery, and by September, she was more determined than ever to return to Sheridan and continue her work.

“Being diagnosed with cancer in my dominant forearm, I think that was the turning point because I was like ‘I don’t care’,” she remembers. “If it’s going to make me better than I’ll take (my arm) off, and I’ll learn how to do my art in a different way. I’m very determined that way.”

“When I'm painting …it’s just like a nice moment to myself and to lose myself in the actual task of the paint and the brush. It's almost like a meditative state.”

At Sheridan, she found a path back to her art. David Joron, VCA program coordinator, helped her adjust her course work so she could start the term in digital-focused courses that didn’t require fine dexterity. Her life-drawing professor decided to introduce the whole class to new way of creating large scale art, using charcoal attached to a piece of bamboo. The approach gave Molinaro a new way to create large-scale drawings while working alongside her classmates.

When it came time to begin her final-year thesis, Molinaro took the opportunity to explore writing and digital illustration, creating a book called Kayla’s Closet – a feminist empowerment story written from the point of view of a little black dress on a journey from haute-couture runway to hand-me-down. The project allowed her to marry her love of art with her other passion, fashion. 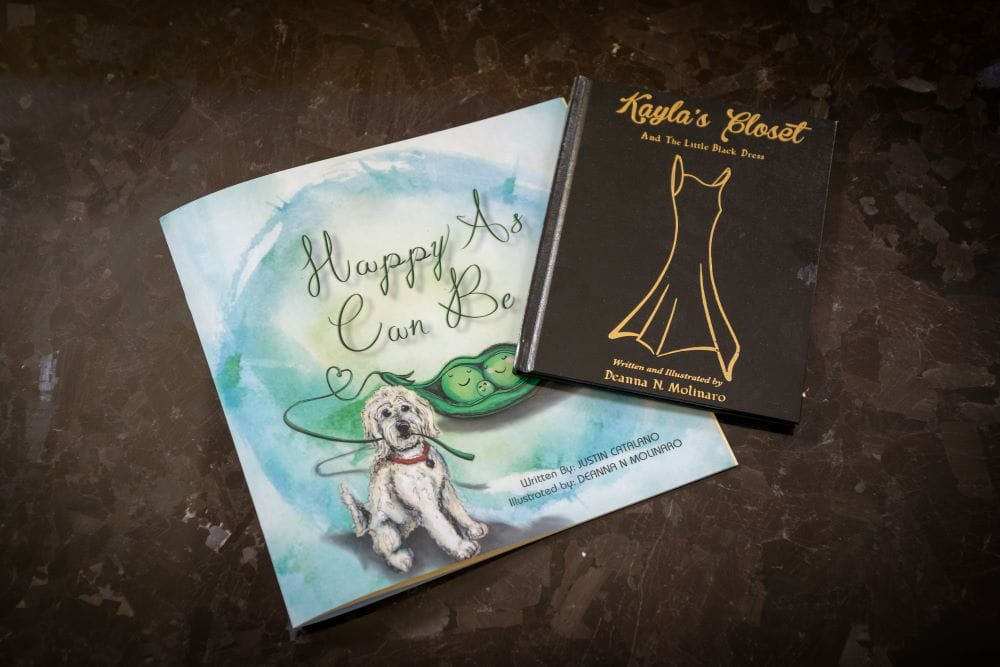 Today, Molinaro is no less resolute. Her home studio is full of innovative tricks to help her achieve her artistic ambitions. Her easel is angled so she can reach the top of the canvas from her wheelchair. She’s learned to balance a tube of paint with her right elbow, and lines the edge of her workspace with those thick rubber bands so they’re always at the ready.

Her efforts are paying off. Since graduating in 2018, Molinaro has illustrated books and hand paints accessories, adding colourful motifs, and geometric patterns to purses and sneakers. The walls of her studio are lined with portraits that mix realism and fantasy ‑ work that has been showcased at different events, including Raw Arts Toronto at the ModClub in early 2020.

“Being diagnosed with cancer in my dominant forearm, I think that was the turning point because I was like ‘I don’t care'. If it’s going to make me better than I’ll take (my arm) off, and I’ll learn how to do my art in a different way. I’m very determined that way.”

She also recognizes her work can be used to raise awareness about EB, and often creates artwork to be auctioned at charity events. Advocacy for EB, and accessibility issues in general, is a natural fit for Molinaro. Her own support system has helped her be successful. Her parents helped to found Debra Canada, a group that connects families of those living with EB so they can educate themselves and get resources to pass along to medical professionals, who often have little experience with the condition. Molinaro is determined to keep educating people about the illness – and the need to make our public spaces more accessible so everyone can enjoy them. Because art, like all of us, is more beautiful when it incorporates everyone.

“It’s just something that I think the public needs to be aware of. You shouldn’t treat people like they’re contagious just because they look different,” she says. “I’m not ashamed of (my EB) so I think I should stand up for those who can’t or don’t want to.”