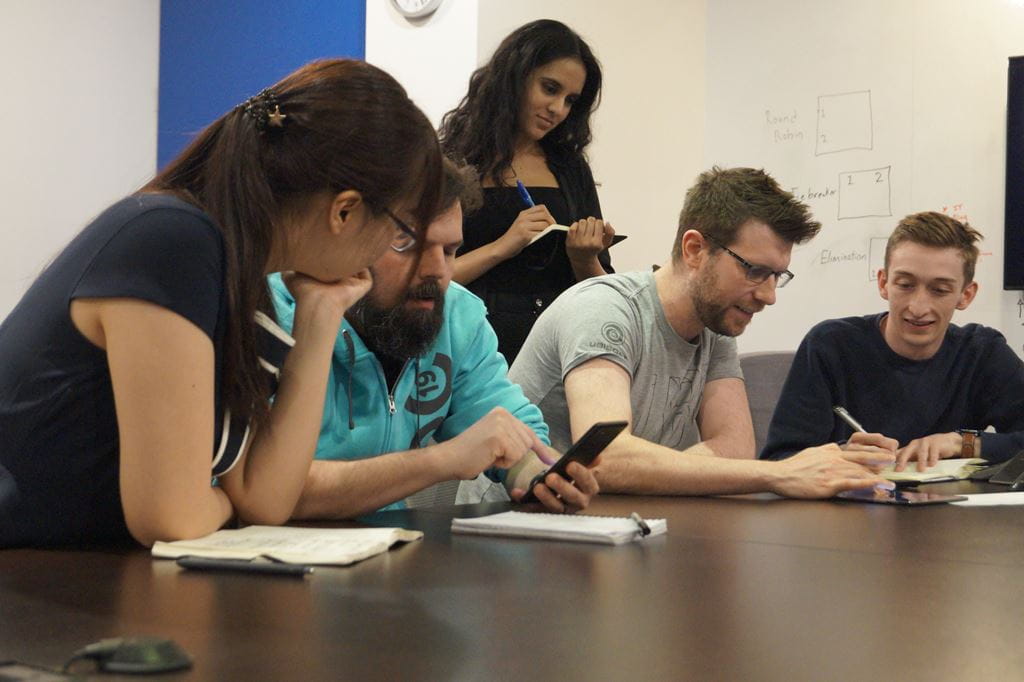 It’s the decisive challenge. The boss battle. The level before the credits roll. Honours Bachelor of Game Design students enter their pivotal fourth and final year at Sheridan harnessing the skills attained throughout the program with their sights set on the ultimate goal: launching into industry.

The academic year is structured as a project-based studio simulation. Students work in teams to develop games – their capstone projects – many of which become the cornerstone of their portfolios. In creating a robust game in just two semesters’ time, students experience tremendous technical, artistic and interpersonal growth.

It’s a practical and purposeful experience, says Jose Rueda, a fourth-year professor who brings to the role more than two decades of international game design experience. “The philosophy behind the program is that a student will walk away with a methodology to enter the industry in any project and understand how to contribute,” he says.

Games are the vehicle through which students learn lessons in flexibility, adaptability, professionalism, individual drive and teamwork. Rueda reminds them that “industry is hiring a person not a game” and works to focus their energies on outcomes that will position them for meaningful work after graduation.

The teams and their games 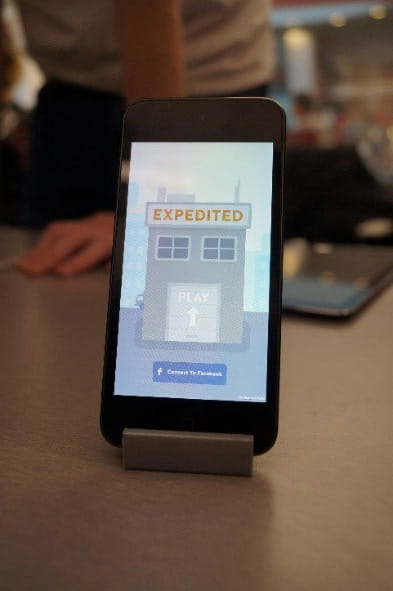 A fast-paced, mobile puzzle game called Expedited, the mixed-reality experience of Booyo Park, a genre-subversive, combat game called Shattered, and a community-focused multiplayer game, Mission Control – these offer a snapshot of the fourth-year capstone projects by the 2018-19 student cohort.

Each project varies in scope, artistic flair and gaming experience. That’s the beauty of the capstone project – it can take on many forms without one single recipe for success.

The ways in which each team form vary too. Some worked together in and out of the classroom in the first three years of the program and entered the capstone year with roles assigned, ready to execute an idea. Others formed a team more arbitrarily at the start of fourth year. No matter the team’s makeup and history, each is required to create a project plan, check in with faculty mentors weekly and meet various checkpoints modeled after industry best practices.

Two games from the graduating class were created with external partners. Mission Control was designed in partnership with the York Regional Police. Its objective: use gameplay to create positive relationships between the force and youth in its communities. Booyo Park was a collaboration with Hong Kong-based Shadow Factory, an international augmented and virtual reality company that creates dynamic experiences through innovative technologies.

Whether an audience of industry experts, children, or their peers, any chance to get their games in front of a captive audience was welcomed by the fourth-year students. After all, the design process doesn’t happen in a vacuum. 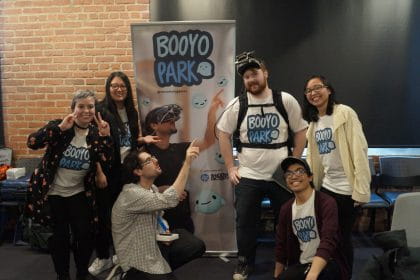 The three teams behind Shattered (HomeBass Games), Booyo Park (Hexabyte! Games) and Expedited (Snick Snack) were selected by their professors to participate in a playtest opportunity at Ubisoft Toronto in advance of the annual Level Up student showcase. Ubisoft designers were enthusiastic to test the students’ games and provided invaluable feedback that was incorporated into the designs.

On another occasion, the entire class of fourth-years took over a section of Oakville Public Library’s Iroquois Shore Branch. More than 1,500 community members passed through the day-long playtest event. Students were eager to observe people of all ages and all levels of gaming experience interact with their work. 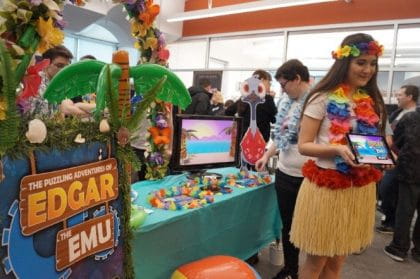 Throughout the year, Homebass Games prioritized showcasing their game to people beyond their social circles. “The collective feedback of dozens of people doesn’t lie,” says Joshua Garcia. “By carefully analyzing it, a lot can be learned. We were able to identify a series of player experience concerns early and work towards solving them in a timely way.”

P.Y. Boulerice, Snick Snack’s team lead says “you can’t overemphasize the importance of playtesting.” He and his team went a step further and implemented Facebook’s analytics tool into their mobile app, which provided quantitative data from users. “That automation allowed us to conduct qualitative playtest sessions and really get down to what our users were struggling with,” he explains.

It’s the journey, not the destination

An end-of-semester, in-studio showcase of capstone projects at Trafalgar Campus provided an opportunity for each student to speak to the lessons learned throughout the year. Some common themes emerged: teamwork can be challenging but is vital to prepare for industry, you may have to wear many different hats in the game design process to get the work done, and it’s okay to pivot from the initial plan if it improves the gaming experience.

Homebass Games found that Shattered’s genre-subversive concept led to challenges when teaching game mechanics to players. “We had to understand players’ existing understanding of games relative to ours and how it affected their learning and interpretation of our game,” says Sean Braithwaite. 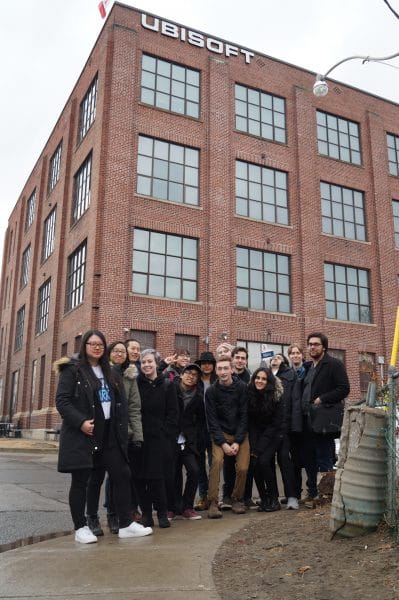 Hexabyte! Games’ Booyo Park worked with unfamiliar hardware like the Zed Mini camera and the Leap Motion. “Only one of our team members had some experience in virtual reality,” says team lead Jennifer Stienstra. “It was a huge learning curve to design and develop for this technology, especially since there aren’t that many mixed reality references we can look to for help.”

It’s overcoming these obstacles that is pivotal to the fourth-year experience, according to Rueda. “The games are a catalyst for students to reflect on issues such as roles, practices and focus,” he says. “And they must do so efficiently and creatively. The industry is rapidly changing so adapting and re-inventing themselves is important.”

All students in the program had a multitude of opportunities to network with and learn from visiting industry experts.

Rueda organized talks by industry experts at the game studio. With contacts around the globe, the speakers he invited brought with them a wealth of experience. They included Juhn Young Lee, the president of Netmarble, the world’s largest mobile publisher based in Korea, Max Hoberman, president of Certain Affinity and one of the lead designers of the Halo franchise, Melissa Cash, the Director of Marketing at Built By Snowman Inc., a Toronto-based studio and Anne Edgar, inclusive game designer and creator of the Girls Level Up documentary project. 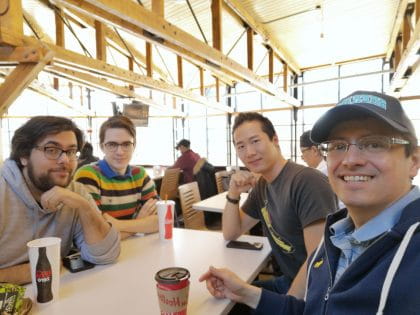 “Fortunately, the game industry is generally very open to supporting the next generation of designers,” says Rueda. “Our industry is well connected around the world and more or less, everyone is within two degrees of separation.”

These industry experts also include the faculty who the students see nearly every day during the semester. Each team has production, design, art and technical mentors with whom they meet regularly to evaluate challenges, chart progress and celebrate wins. It’s their role to push team members to look beyond what’s on the screen. “There is so much more that goes into a product than the game mechanics like menus, pop-ups, settings, promotional materials, analytics and publishing,” says Boulerice. “Our mentors encourage us to look at the project holistically.”

Since the first cohort of graduating students in 2017, the Honours Bachelor of Game Design program has been no stranger to recognition and the hardware that comes with it. And this year was no different. 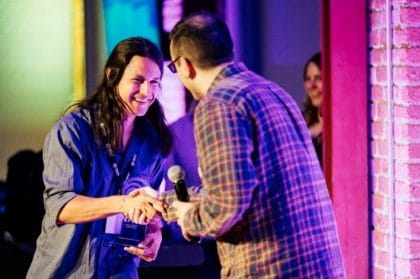 Nathan Powless-Lynes from Homebass Games won first place in the Level Design category at Ubisoft Toronto NEXT – an annual competition hosted by the world-renowned studio that recognizes talent of game development students and helps kick-start careers. Winning the category secured Powless-Lynes a paid, summer internship at its mid-town Toronto office.

Level Up Toronto – the showcase for post-secondary game designers and animators across Ontario – brought more than 1000 game design enthusiasts and industry experts to downtown Toronto in April. All of Sheridan’s fourth-year teams participated at the event and three teams won four awards including recognition for Best Mobile Game, Best Game Art, People’s Choice and Best Gameplay.

For the first time in the history of the program, Sheridan students were part of the Intel University Game Showcase at the hugely popular Game Developers Conference in San Francisco, California. The students of bigbee games, who created Mission Control, were one of only two groups in attendance representing postsecondary institutions outside of the United States. They had the opportunity to share their game in front of an international audience and panel of judges from some of the world’s biggest game studios.

Boulerice learned from his time studying game design at Sheridan to never settle. “There’s always something new to learn or a direction to grow in,” he says. “I’m taking this perspective forward into my career.”

Stienstra adds: “The opportunities to meet other people in our industry, make valuable and long-lasting connections is part of the Sheridan experience. We’ve increased our visibility as game designers and put our talents on display so that potential employers can see us and what we’ve accomplished before we’ve even graduated.” 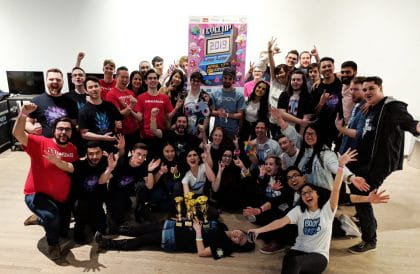 Edgar, who spoke to the students during the academic year, was invited back to deliver a toast to the graduating cohort. In her speech she emphasized the importance of empathy in game design.

She imparted these words just weeks before students crossed the stage at Convocation: “My hope is that you will use your power of empathy to connect with the people who play your game and cause them to connect with each other. Your empathy will inspire theirs. That is the real quest. The win that will count.”

Her advice echoed that of Rueda and other Sheridan professors to fourth-year students; a game designer must look beyond the mechanics and art to make a lasting impact.

Fail forward. Ideate. Co-create. These are some of the terms used in conversation at a typical Enactus Sheridan meeting...