Grads are turning their talents toward the scientific space 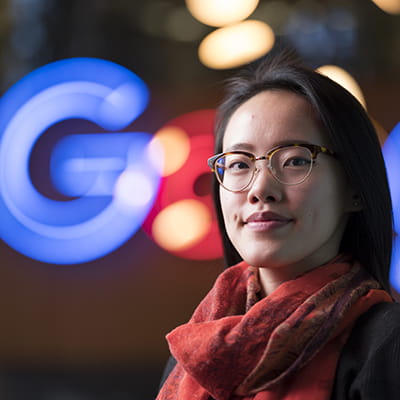 At Google’s headquarters in California, Kaye Mao is part of a team that could revolutionize health care. Mao and her team at Google AI are developing software that can scan medical images, identifying things like retinal abnormalities in the eye, or tumours that might be missed. About 80% of the time, Mao says the computer gets it right. As one of the designers working in this area, it’s Mao’s job to understand what the artificial intelligence technology can do so she can design the software in a way that is easy for clinicians to use.

“Our goal is not to replace health providers, but to augment their abilities,” she says. “We want to give them more time to do what they do best, which is care for others.”

A gig at Google is a perfect fit for Mao, who taught herself to code websites at age 11. But she also loved art. She originally wanted to study Animation at Sheridan, until she discovered Interaction Design.

“When I was in high school, I was interested in math, biology, and art,” she recalls. “Interaction design was a perfect combination of creativity and logic.”

While at Sheridan, she completed an internship on Google’s Cloud Team in New York City, and during her second year, she co-founded a startup called Dash MD, which built an app to allow patients to manage their recovery after visiting a hospital. After graduation, she re-connected with Google. Within weeks, she was heading to the tech giant, a decision she hasn’t regretted for a moment.

“What gets me excited every day is the opportunity to fundamentally improve the health-care system for the better,” she says. “In terms of human impact, that means people being able to go home early, or a doctor being able to spend more face time with their patients.” 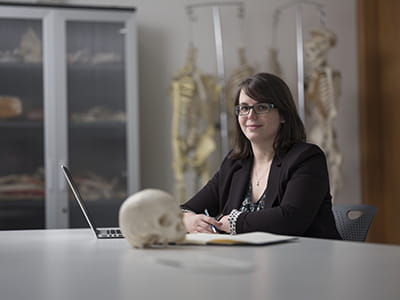 Andrea Gauthier was a first-year Illustration student when she discovered anatomy illustration. She was intrigued by the idea of putting her skills to use to give health providers and patients a visual look at health care.

“I guess it felt like a noble cause, drawing something for the greater good,” she recalls. “Something like patient illustration, helping patients understand what’s happening to them; or, helping doctors improve on their skills by helping them to understand certain processes.”

Gauthier decided to follow her passion, and after Sheridan she went on to study biology and medical illustration, eventually earning her master’s in biomedical communications from University of Toronto – Mississauga.  In 2018, she’ll complete her PhD in medical sciences based on her work studying how a videogame called MolWorlds can help biology students understand how changes in environmental factors like temperature, for instance, affect molecules’ movement inside of cells.

Her research builds on work she did while completing her master’s when she created, designed and coded a video game to help a study group understand vascular anatomy. She says her illustration background helps in all her research, because it gave her skills to communicate complex topics.

“Sheridan really helped to enhance my art skills. We had to work fast, we had to work hard, and over a four-year period, my art skills really developed, and became strong in a whole bunch of different mediums,” she says. “That led me, when I went to biomedical communications, to focus more on the communications aspect of it and learning the content knowledge.” 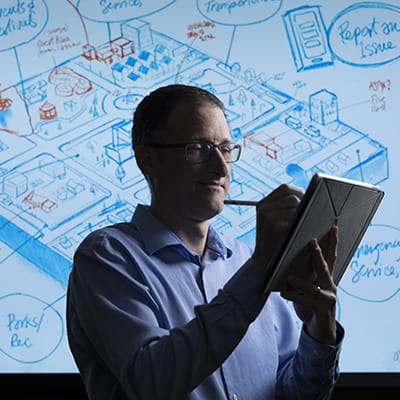 Like any animator, Ron Letkeman is a storyteller. His plots tell of how water flows through the ground, or where minerals can be uncovered. His characters are the people using municipal programs, or new road designs.

As the Senior Animator and Illustrator at GHD, a professional services firm in Waterloo, Ontario, it’s Letkeman’s job to create engaging stories that explain engineering projects. His work is used by clients like Red Deer, Alberta, for instance, when it needed a video to explain how to drive through traffic roundabouts. Letkeman uses tools like 3D animation software, virtual and augmented reality and 360-degree video to create video and graphics that might show how water flows through the ground, where contamination might be occurring, and how to clean it up. Although he doesn’t have an engineering background himself, Letkeman says that works to his advantage. He asks the questions his audience would want to know: how does this work? How will it affect me? He then applies many of the same principles he learned at Sheridan to his projects, even creating storyboards to demonstrate how he’ll bring data to life in a 3D animation.

“Whether you’re working for Pixar, or you’re working at GHD animating the flow of groundwater, it all boils down to telling a story. All those fundamentals I learned at Sheridan, the layout, the design, the storyboarding principles, are things I draw on to this day.”

Letkeman first got started at GHD after working at an animation firm and then doing some graphic design and illustration for telecommunications firms. When a contact told him about a job at GHD, he was surprised because it was a role he didn’t even know existed. Nearly 20 years later, he estimates he’s worked on about 700 projects – and he’d encouraged any arts grads to think about a similar role.