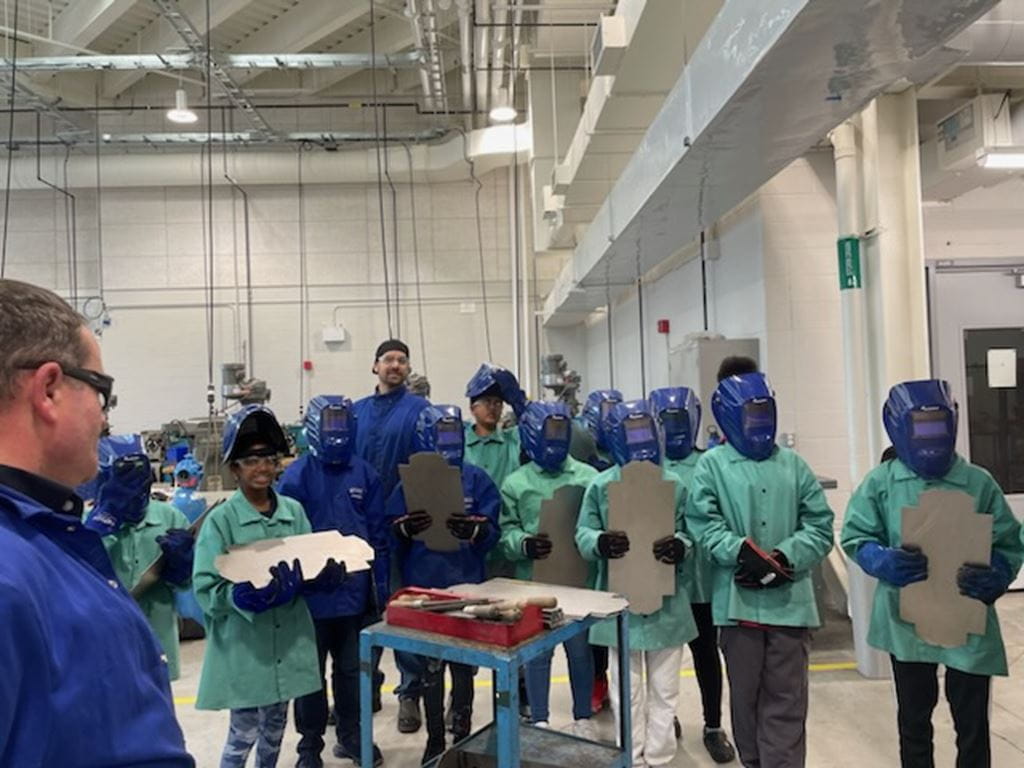 Using many different tools to promote the skilled trades

by Jon Kuiperij – Oct 18, 2022
Fusing pieces of metal together to build a toolbox. Connecting wires that power a three-phase motor. Transforming the shape and appearance of a piece of wood with power tools and propane.

Any of these experiences could be the spark that ignites a passion to pursue a career in the skilled trades. Or it could simply be seeing some of the top tradespeople in the world in action, an opportunity that hundreds of middle school students will have this week as Sheridan hosts tours during the WorldSkills Competition 2022 Special Edition’s Industrial Mechanics event at the Magna Skilled Trades Centre in Brampton.

“We offer a wide variety of programs and initiatives designed to attract, motivate, inspire and support any person who might want to consider a career in the trades,” says Magna School of Skilled Trades Community Outreach Manager and professor MaryKate Grey. “In addition to providing state-of-the-art equipment for participants to try different trades and demonstrating that a career in this industry can be lucrative, valuable and fulfilling, our ultimate goal is to offer accessible pathways to education and help open doors to everyone.”

Here are a few more examples of how Sheridan’s various skilled trades outreach programs are making a difference in the local community.

Long before she became a school administrator, Vida Gardener knew she wanted to help expose youth to the skilled trades.

“I grew up as the only girl in a family of farmers, and I loved watching my brothers fix their machines and trucks and tractors when they weren’t working. I loved seeing them change the oil and hearing the sounds of the vehicles,” says the principal of Fletcher’s Creek Senior Public School in Brampton. “I said to myself that if and when I was in charge of a school, I’d want to make that part of my students’ education.”

That dream is now a reality, thanks to Sheridan’s Try The Trades after-school program that exposes students in Grades 7-8 to welding, electrical techniques, precision machining and construction each Thursday from 4-7 p.m. Fletcher’s Creek students account for 13 of the 16 participants in the first six-week block of the program, and Gardener hopes they’ll fill all 16 spots in the next block — noting more than 100 of her students have expressed interest in participating.

“I’m so grateful that our students are receiving this hands-on experience and exposure to the trades,” says Gardener. “This is a great way for them to see STEAM (Science, Technology, Engineering, the Arts and Mathematics) and problem-solving concepts in action, and also to recognize they can utilize their skills and creativity in a different way that is meaningful to them.”

Students aren’t the only members of the Fletcher’s Creek community who are learning new skills. Several of the school’s teachers will receive safety training that will enable them to operate the band saws, precision cutters, belt sanders, drill presses and other millwrighting equipment in Fletcher’s Creek’s new stack room. “Once our teachers are trained, they can begin designing woodworking projects that fit our students’ interests,” Gardener says. “I want to build our capacity of teachers who can keep this education going in our school.”

As the son of a carpenter, Ayden Allen has had a front-row seat to a skilled trade his entire life. However, it wasn’t until attending a recent Skills Ontario Summer Camp at Sheridan that the Grade 7 student fully appreciated the many other ways people can make a living working with their hands.

“He’s seen his dad build stuff, but his dad’s not a welder,” Katie Allen says of her oldest son. “He also hadn’t been exposed to other types of jobs like tool and die, plumbing or electrical, so it was really exciting for him to be able to try some of those different things and get hands-on experience.” 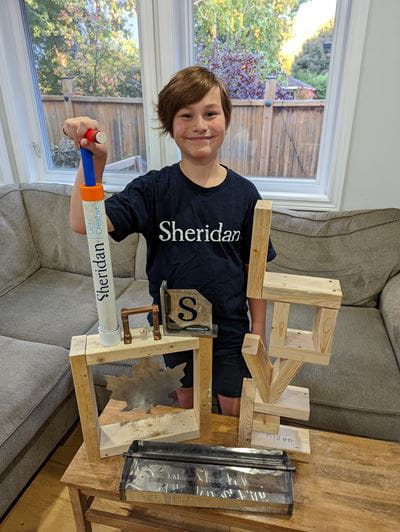 During the camp, Ayden and other participants welded metal together to build a toolbox, created a decorative wooden sign that spells out the word LOVE, built a watershooter out of plumbing materials and stamped metal into the shape of a maple leaf. Ayden then returned for a second week of the camp, when he built a wooden case for the maple leaf — complete with a copper handle — that he plans to give to a family member for Christmas.

“The camp took concepts that could be very practical or boring or dry and made them fun, meeting kids where they’re at,” Katie says. “Ayden was really proud of the things he made, and he’s already talking about how he wants to go to Sheridan to take the welding program. This is the first time he’s actually talked about wanting to do something as a career.” Ayden’s positive experience has even rubbed off on younger brother Caleb, a Grade 5 student who hopes to sign up for the camp in a couple of years.

Like Ayden, Will Holmes-Ramroop was familiar with carpentry before attending a week of the camp. “I had already created quite a few things out of wood and helped my mom and her boyfriend build some things in the back yard,” says the 14-year-old, who hopes to pursue a career in mechanical engineering. “We’ve also learned about electricity in school so I knew how that worked, and even though I’d never tried welding or plumbing before, I also found that to be a bit easy.” Sensing that Holmes-Ramroop wasn’t being challenged by the camp’s workshop activities, Grey found some other things for him to do — including assisting Sheridan professors and students in the Magna Skilled Trades Centre’s welding shop. That led to Holmes-Ramroop being hired as a part-time assistant in the facility, where he’ll help teach welding to younger students in the Try The Trades program.

“Everyone’s really friendly in the welding shop. They’ve been really welcoming,” Holmes-Ramroop says. “I enjoy helping people, and I also get to do a bit of welding myself. Seeing how things are built are going to help me learn how to become an engineer.”

For years, Debbie has held down several part-time jobs in order to make ends meet as a single mother. But when her son came home from the Skills Ontario Summer Camp gushing about all the different experiences he’d enjoyed, Debbie began to imagine what a career in the skilled trades might look like.

Shortly after discussing that possibility with her son, Debbie received an invitation from Grey to join Sheridan’s new Accelerate Your Future: Introduction to the Manufacturing Trades program, a free 14-week initiative designed to make pre-apprenticeship training more accessible for racialized and marginalized groups who historically have not been represented in the skilled trades. Later this month, Debbie and 14 other students in the program will begin learning fundamental skills in electrical, plumbing, welding, precision machining, industrial mechanic millwrighting and construction at the Magna Skilled Trades Centre.

“If it wasn't for programs like this, women would continue doing the same old things with their lives, staying in their comfort zone or their lane. The world has changed a lot, and this program allows us to change with it.”

– Debbie, Accelerate Your Future: Introduction to the Manufacturing Trades participant

“I am taking the leap of faith to learn new things and experience new challenges. My son is my motivator, and when he gave me his blessing, I knew that I had to go for it,” says Debbie. “I am showing my son that his mom is willing to educate herself in things that I thought weren’t made for me.

“If it wasn’t for programs like this, women would continue doing the same old things with their lives, staying in their comfort zone or their lane. The world has changed a lot, and this program allows us to change with it.”

Supporting women in the trades

Kristen Willis is used to feeling different from everyone else around her. “I’m a Black person, I’m a Queer person, and I’m a woman,” she says. “That makes it hard to check off many boxes I have in common with others, no matter where I go.” 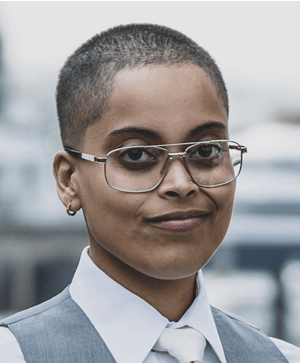 Those feelings were only amplified when Willis, a former middle school teacher who holds a master’s degree in Animal, Poultry & Veterinary Science, enrolled in Sheridan’s Industrial Mechanic Millwright pre-apprenticeship program to pursue a career in a male-dominated field. “I wasn’t someone who was very handy growing up,” says Willis (pictured, left), who first became interested in the skilled trades when she met her future wife, a line supervisor at Ford Motor Company’s Oakville Assembly Complex. “Joining a trades program can be really scary and intimidating when you don’t see a place for yourself.”

Brittany Keeping felt a similar need for a community of like-minded people when she studied welding at Sheridan, prompting her to co-found Women In Trades Sheridan — the college’s first-ever skilled trades club. “My boyfriend works in the trades, so I knew what it was like for a man to work in the trades. But I wanted to hear what it’s like to be a woman in the trades, from women who work in the trades,” says Keeping, the club’s first president who graduated in April and now works as a pipefitter.

Keeping was also a presenter in a webinar last fall that offered support to women/womxn embarking on careers in the skilled trades. Sheridan professor Carly Myers, an electrical apprentice, another welding student, a plumber and a steamfitter rounded out the panel that shared personal experiences of sexism, ableism, racism and classism.

“It’s been really helpful to be able to talk to fellow women who are much further ahead of me in their schooling and their careers,” Willis says. “Regardless of how confident I am overall, I still need a place to rest. I can’t stress enough how important representation is.”