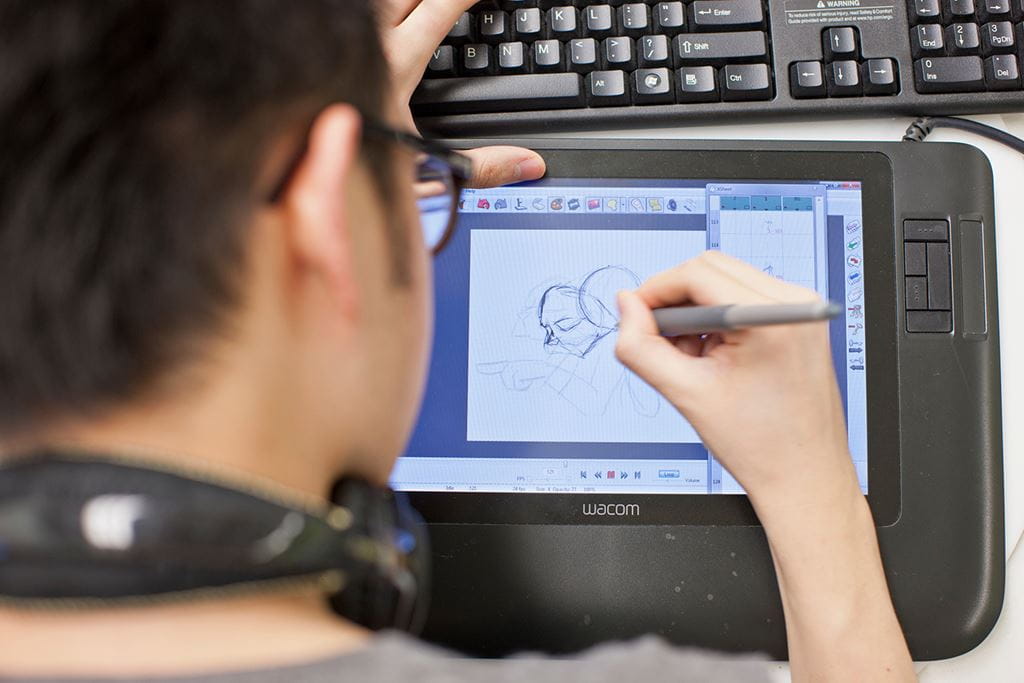 Over the last three years, Bachelor of Animation students Daniela Elizondo and Cameron Johnson volunteered to help organize Animation Industry Day. The annual event gives the graduating class the chance to attend recruiting sessions, have their work viewed by industry experts, and celebrate with awards supported by members of the animation community.

This year, it was Elizondo and Johnson’s turn to show off their films. Then, COVID-19 forced the closure of Sheridan’s campuses and public events were cancelled. That included Industry Day, and Elizondo was disappointed. “I’ve seen my classmates work hard and be proud of their work,” she says. “I would’ve loved to see the industry acknowledge their hard work.”

Every year, Sheridan hosts Animation Industry Day and 20 other grad shows and academic awards celebrations like it. They’re a long-standing tradition that bring students together with industry supporters, donors, and faculty members to celebrate accomplishments over the past year. In many programs in the Faculty of Animation, Arts and Design, graduating students put their best work forward to be critiqued by professionals in the field, and awards are presented at the shows. In other faculties, the Academic Awards ceremonies are a year-end celebration of students’ work and their contributions to the classroom. 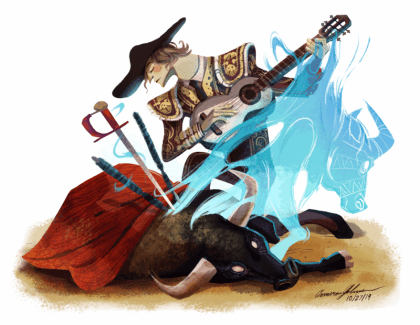 So what happens when a pandemic hits? Somehow, the shows must go on. The faculty teams behind them were committed to nothing less.

“Honestly I was a bit worried, and unsure of what to expect,” Johnson confesses. “I did trust that things would continue despite the setbacks, but I couldn’t imagine at the time the shape they would take.”

Animation professor Tony Tarantini knew Industry Day had to shift online; it’s the key way to introduce the class of 2020 to the animation community. Luckily, over the past few years, the animation team had created an Industry Day website, and an app that listed students’ contact information and promotional links. This year, that app became the primary way to connect studios and students. Screening reels were sent directly to registered guests and judges. Once prizes were presented, the students were encouraged to share their films more broadly with industry so they could go after their dream jobs.

Tarantini says planning this amidst a pandemic has led to unexpected discoveries. Some studios, including Disney and Dreamworks, are sometimes unable to travel to Oakville for the in-person event. Now, they were able to watch films remotely and connect with students virtually. Stay-at-home directives also meant fewer distractions for students putting the final touches on their films. “There’s just as many beautiful stories this year,” Tarantini says. “I don’t see a difference in the amount of work or quality of work.”

When Bachelor of Illustration coordinator Joe Morse and grad show chair Clemente Botelho moved their show online, they realized if students didn’t need to be in a room together, neither did the judges. That meant travel bans wouldn’t keep the team of internationally renowned artists from coming together.  The could still adjudicate the student multimedia showcase, Moving Pieces, from their homes across North America.

Klassen, the Caldecott-winning author and illustrator of I Want My Hat Back, This Is Not My Hat and We Found a Hat, is based in Los Angeles. He remembers the end of his own career at Sheridan fondly, and he wanted to help send off the class of 2020 in the best way possible.

“Giving them a time to get together and properly acknowledge their work and connections will help them close the book on this time,” he says. “The world feels like it’s changing, quickly, and you wouldn’t blame them for feeling anxious about what kind of prospects will be waiting for them. I think any kind of reassurance from professionals out in the world would be especially welcome.”

Once judges scores were in, winners were revealed during a Zoom call that more than 200 people tuned in to. Now, the work of all 74 students remains available for everyone to enjoy online, long after a bricks- and-mortar show would’ve become a memory. More than 4,000 viewers have visited the site since it launched April 30.

Morse says Moving Pieces did have lots of upsides, and he’s going to consider how to incorporate them into face-to-face shows whenever it’s safe to begin them again. Ultimately, he says, an online show can never fully replace the personal touch of the in-person event.

“The grad show is a ritual that ends four years of working together,” he says. “Our students trust each other, and there is an opportunity to broaden their sense of community with the grad show.”

Creating a personal connection in a virtual space was also a challenge for Bachelor of Photography professor Anne Cibola, especially considering the photography grad show is usually a two-day gallery show, created with a professional curator and timed to coincide with the Scotiabank Photography Festival.

“We still wanted to introduce grads to industry and celebrate them, and we wanted to mark the end of the school year,” she says. “How do you shift that to an online world and still make it matter to audiences?”

The answer came in boosting content on a website, which had previously just been used to supplement the real-life show. Now, it served as the primary portal so industry experts could judge the students’ work. Prizes were awarded later on during a videoconference party with faculty to celebrate the grads’ accomplishments.

In the past, the website housed just one photo for each student. Now, students could showcase four or five of their best images. Students also got to connect with photography professionals for virtual portfolio reviews, which Cibola says were even more in-depth than the in-person sessions. Like so much in the world, the changes, and their impact, will take time to be evaluated. For now, she says it’s been heartening to see the class of 2020 welcomed into the profession.

“There’s been real generosity and community support,” she says. “Having a network of industry contacts to give honest feedback is critical and we feel grateful to see it continue. We have donors and sponsors who have been long-time supporters. They deserve great thanks; we’re grateful to have these supports for our students.”

“The grad show is a ritual that ends four years of working together. Our students trust each other, and there is an opportunity to broaden their sense of community with the grad show.” – Joe Morse

Back in Animation, Tarantini agrees the support from the wider community – including industry-rep judges, alumni, and awards donors – isn’t something that can just be uploaded to a website.  But it shone through nonetheless.

Ricardo Curtis (Animation ’95), co-founder of Toronto-based studio House of Cool, is one such supporter. The studio counts major Hollywood productions like Despicable Me among its work, but Curtis says it’s incredibly rewarding to support students at the grassroots level. Their films represent true labours of love, nothing changes that.

“Graduations happen regardless of what’s going on outside of school. Students have been working hard for four years and they all deserve the chance to be seen and rewarded for their efforts,” he says. “I remember back in the SARS years when there was a similar situation, House of Cool hired some of our very best people then. We will always be a supporter of Sheridan and its students so long as they keep working to deliver great art.”

For programs that celebrate with an awards ceremony instead of an end-of-year show, it’s harder to publicly acknowledge students’ academic journeys, but there are still plenty of options available.

In the Faculty of Applied Health and Community Studies, for instance, Dean Michael O’Leary’s team will be using voice or video calls to share good news with students who earn recognition this year.

“Our students have once again shown great effort and dedication to their academics, and that should always be acknowledged and celebrated; this year is no exception. We are so pleased to be able to shine a light on their achievements in this time of uncertainty.” – Michael O’Leary

In the Faculty of Applied Science and Technology, award recipients will be notified with a congratulatory video from the Dean, and plans are underway to showcase each recipient online. FAST Dean Vertha Coligan says it’s critical to ensure students are still being recognized.

“The Faculty of Applied Science and Technology is filled with talented, exceptional students, and it’s so important, especially now, to acknowledge and celebrate their success. We take great pride in the accomplishments of our students. I am so proud of their achievements and commitment while at Sheridan, and I want to make sure they receive the recognition they deserve. My only regret is that I cannot shake their hand in-person while I tell them how honoured I am to present them with their award.” – Vertha Coligan

The Pilon School of Business, meanwhile, will be sharing a video message from the Dean Anne-Liisa Longmore with award winners.

“The Pilon School of Business’ Academic Awards ceremony is always an important way to acknowledge and celebrate the commitment and hard work our students have dedicated to their learning and community all year long. This year, when so much in our daily lives has been upended, it’s more important than ever. I’m so thankful for the generosity of our donors who, despite these uncertain times, have chosen to continue to support our students by showing them that their hard work is valued.” – Anne-Liisa Longmore

View a list of more academic awards and grad shows

Pictured at top of page: Sheridan Animation student drawing on a tablet.