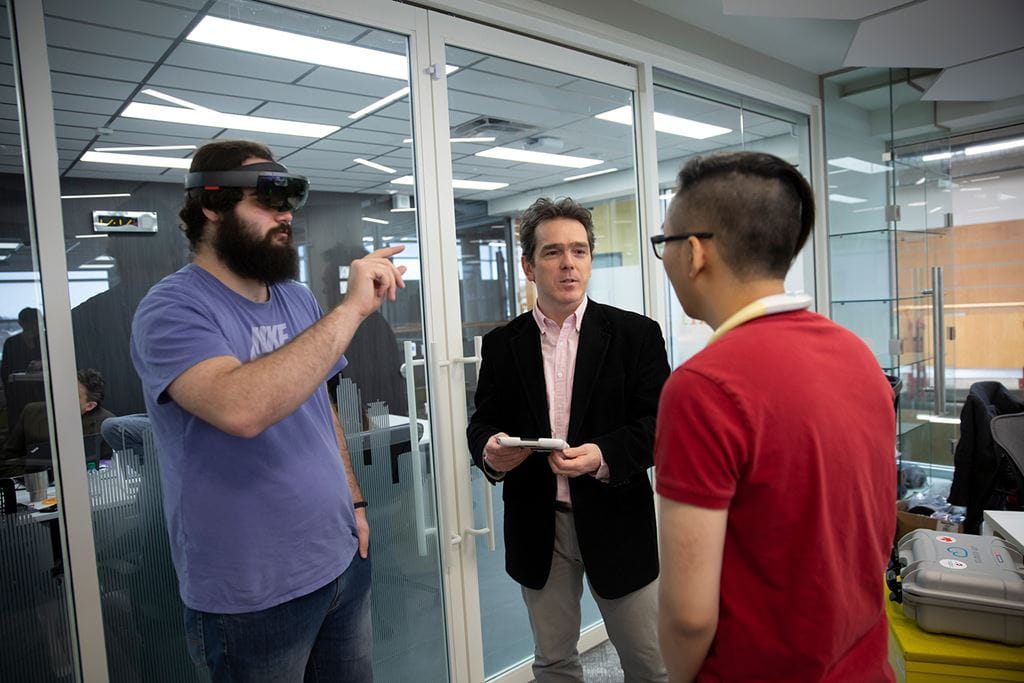 Constructing a clinic of the future

A doctor puts on a Microsoft HoloLens headset and uses voice commands to call up a patient’s chart. Vital signs – captured in real-time – project around their hospital bed using mixed reality. With a simple hand movement, CT and MRI scans slide into view. This might read like a scene from a science fiction movie, but it’s a scenario not far from becoming reality. In partnership with Kitchener-based medical company Cloud DX, a ‘clinic of the future’ is currently in development at Sheridan’s Centre for Mobile Innovation (CMI) – one of the college’s five research hubs.

The CMI’s team work on purposeful, cutting-edge projects with partners in the healthcare sector. Its director, Dr. Ed Sykes, facilitates such opportunities. He turns to professors in the Faculty of Applied Science and Technology with a range of expertise to serve as principal investigators and students in the Honours Bachelor of Computer Science (Mobile Computing) program to assist with applied research.

With this structure in place, projects like the clinic of the future are on their way to becoming a possibility of tomorrow.

Cloud DX’s VITALITI vital signs monitor is the hardware that inspired what would eventually be pegged as the clinic of the future by Sheridan contributor, Professor Magdin Stoica. 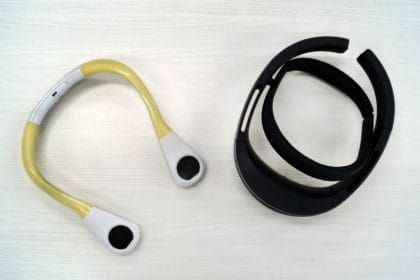 Instead of using multiple large machines with various wires to take different vitals, the VITALITI is one unit, worn like a necklace that drapes behind the patient’s neck and onto their chest. It only requires three electrodes to take nine measurements. It’s highly portable, cost-effective and non-invasive.

Cloud DX co-founders Dr. Kohli, Chief Medical Officer and a physician in Oakville, and Robert Kaul, CEO, believe the device will be game-changing in the medical world. Dr. Kohli’s seen first-hand the limitations and expense of bulky machines in already crowded and underfunded hospitals. But it’s the use of the monitor in conjunction with mixed reality (augmented and virtual) software that he views as the winning combination for advancing patient care.

Dr. Kohli learned of the CMI and Dr. Sykes’ experience working with the HoloLens in a local Oakville newspaper article celebrating its receipt of a Natural Sciences and Engineering Research Council of Canada (NSERC) grant. As Cloud DX had no internal expertise in mixed reality technology, it seemed like an opportune collaboration between industry and academia to bring the idea to life. It wasn’t long before the two met, mapped out the partnership details and had a team at Sheridan working to develop the concept.

The overarching objective of the clinic of the future is to break down barriers to patient data by moving from a siloed to an integrated approach. In practice, this would mean using mixed reality to display patient’s real-time vital signs, test results like bloodwork and imaging from other departments as well as the patient’s medical history, medications and allergies all overlaid onto the patient and viewed through the HoloLens. “In hospitals today there are so many streams of data that aren’t currently available on the same platform,” says Dr. Kohli, who works in internal medicine and critical care at the Oakville Trafalgar Memorial Hospital. “By improving access to data in this way, we’re adding human interaction back to the doctor-patient relationship. More time can be spent at a patient’s bedside rather than at a desktop computer pulling information or reading through test results.”

Mark Beauchamp, a third-year Honours Bachelor of Computer Science (Mobile Computing) student has been working on the project at the CMI since January 2018. He’s played an integral role in developing the system’s voice commands, adding in facial recognition and pose detection components. The experience has provided invaluable hands-on learning experience and fulfilled his program’s co-op requirements.

Like Dr. Kohli, Beauchamp appreciates the complementary role that technology can play in people’s lives. “We aren’t looking to replace nurses or doctors,” he says. “The clinic of the future is a way to improve the hospital experience, give a more holistic view of medical data and bring the medical world into the 21st century.”

Working with students who champion the technologies that will help bring CloudDX’s hardware to the next level is refreshing for Dr. Kohli. “I’ve enjoyed listening to students ruminate and share their thoughts and ideas on where the project can go next,” he says. “They fuel it with enthusiasm and take it in directions we hadn’t before considered.”

Showcasing the clinic to the public

The project has caught the imagination of the media as well as medical and technology experts at events like the Singularity U conference in Edmonton, Alberta and OCE Discovery in Toronto. It’s been featured in segments on Global News Toronto and Daily Planet.

“The clinic is compelling for its gadgets and the technology that supports it, but it also has transformative possibilities in the healthcare sector,” says Dr. Sykes. “There’s the potential to improve the patient experience and quality of care.” Cloud DX is currently seeking Federal Drug Administration (FDA) approval for VITALITI with a goal of 2020 to commercialize it and release it for medical use. A similar approval process will be required for the clinic’s mixed reality components.

Given the ongoing nature of the CloudDX and Sheridan CMI partnership, various faculty and students have had a hand at tackling the technological hurdles that come with developing a cutting-edge product. A fresh pair of eyes at different stages of the clinic’s development has been beneficial to its growth.

“The clinic of the future is a way to improve the hospital experience, give a more holistic view of medical data and bring the medical world into the 21st century.” – Mark Beauchamp

Currently being explored by Beauchamp and his mentors are ways to seamlessly connect different medical databases into one view through the HoloLens. Drawing a patient’s full complement of information into one secure platform is the goal.

“We’re working in new territory,” says Beauchamp. “When you’re innovating like this there aren’t a lot of previous examples or products to draw from to support what you’re doing. You must lean on trial and error to move forward. It’s really rewarding when you find a solution that works.”

Learn more about the Sheridan Centre for Mobile Innovation and its cutting-edge projects.