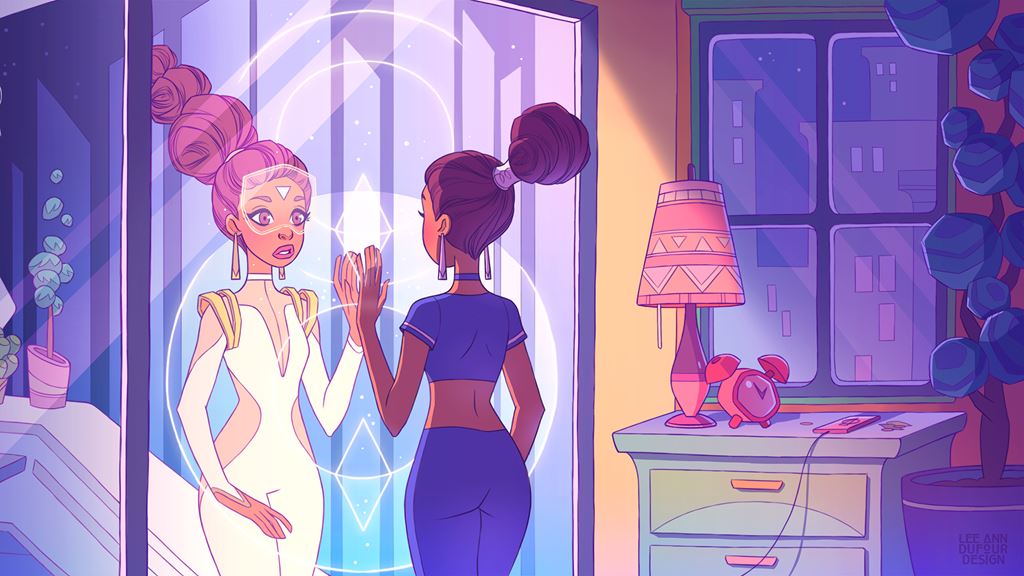 Lee Ann Dufour (Animation ‘2010) is an artist with a difference. The Sheridan alumna has gone beyond sketches, silhouettes and shapes to master the mostly invisible, complex processes that carry a creator’s vision all the way to the screen for the world to watch. Not only does she create visually stunning designs, she has also mastered production principles such as scheduling, budgeting and harnessing talent for projects.

For the last 11 years, Dufour has been criss-crossing the fine line between creative, production and management in the animation industry with surprising elan. Her most recent assignment was as an Art Director for CBC’s forthcoming 52-episode series Big Blue, created by another Sheridan graduate, Gyimah Gariba (Animation ‘2013) for Guru Studio. She has been a Character Design Supervisor, an Ink and Paint Supervisor, and also a Talent Scout, recruiting and networking with artists. The two distinct worlds of art and production – the twain many believe shall never meet – are but a seamless canvas for Dufour.

“I started out as an artist, went into production, moved up to management and finally, I returned to the art department. It was all about finding where my real passion lay.”

“It can be hard to find your place in the big machine of an animation production, where all departments are usually strictly compartmentalized,” Dufour says. “I started out as an artist, went into production, moved up to management and finally, I returned to the art department. It was all about finding where my real passion lay and what I really wanted to do,” she says.

It was a quirk of fate which first opened up the magical world of animation for Dufour. “I’ve always liked to draw and I didn’t know animation was a career path until I was 16 years old and was starting to apply to postgraduate schools,” she says.

“My mom had one of my drawings in her office. Her boss saw it and told her about Sheridan. He said I was really good and I should apply to their animation program. When my mom came home that evening, she told me, ‘You know the Disney movies that you watch, that’s a job,’” Dufour recalls. After that, it was a scramble to get her portfolio ready and beat the admission deadlines to finally get the much-coveted entry into Sheridan’s Animation program.

“My teachers were very helpful and the campus in Oakville is great. It was my first time being surrounded by so many people who were so passionate about art. That was a new and fun experience and I’m so thankful for it,” she says.

“My teachers were very helpful and the campus in Oakville is great. It was my first time being surrounded by so many people who were so passionate about art.”

Dufour’s unique strengths are rooted in her determination to succeed despite the rocky start to her career following her graduation. “I was one of the people who didn’t get a break in animation right away. I see a lot of stories about rockstars who straightaway go to big studios. That’s a bit discouraging really because not everyone gets a job after graduation,” she says.

For over two years, Dufour worked in a bank, never once forgetting her real passion. “I was determined to get back into animation. I spent my evenings working on improving my skills, specifically character design. I redid my entire portfolio,” Dufour says. She also continued to network and keep up with the profession, eventually freelancing for clients including Warner Bros. Animation, Disney TVA, Penguin Random House and House of Cool.

Crossing lines in the sand

Her hard work paid off and she joined Guru Studio, getting associated with leading productions including Mattell’s Ever After High, Justin Time and the Oscar-nominated The Breadwinner. She also co-produced an award-winning short film, Space Between Stars, which was accepted in more than 35 film festivals. Dufour then moved to Elliott Animation and worked as an Animation Character Posing Artist for Total Dramarama before returning to Guru Studio to work on Gariba’s Big Blue as an Art Director. The series is set to debut later this year on CBC Kids, ICI Radio-Canada Télé and Australia’s ABC Kids.

“For over two years I worked in a bank, which is the most corporate environment imaginable, and yet I finally found my place in animation and managed to achieve my dream of becoming an Art Director.”

“I love my work as an artist, but moving between different departments has given me additional skills to support my team as we create shows we’re excited to share with the world,” Dufour says.

“I have seen so many of my classmates leave the profession because they didn’t get a job right after graduation. It is okay to do something else for a while, work toward your goals as an artist and take time to hone your skills. You will find your way back to what you really love. For over two years I worked in a bank, which is the most corporate environment imaginable, and yet I finally found my place in animation and managed to achieve my dream of becoming an Art Director,” Dufour says.