A team of 11 Sheridan Honours Bachelor of Animation students has won an Annie Award for Best Student Film for their third-year group project, The Fox & The Pigeon.

The 47th annual Annie Awards, which were presented Saturday on the campus of the University of California-Los Angeles, recognize excellence in animation in the screen industries. Presented by the Hollywood chapter of the International Animated Film Society (ASIFA), this year’s awards attracted 1,900 entries from across the world. Other nominees for Best Student Film came from schools in the United States, Germany and France.

The Fox & The Pigeon was created and developed by the OOV Studios team of Michelle Chua, Aileen Dewhurst, Sharon Gabriella, Viktor Ivanovski, Sang Lee, Tyler Pacana, Kevin Sung, Morgan Thompson, Chelsea van Tol, Matt Walton and Steven Wang. The six-minute film, which adeptly combines 3D and 2D animation techniques, is a tale of self-empowerment that arises out of an argument between Fox and a curious Pigeon. Eventually, the characters rebel against their sinister narrator, break free from the storybook that contains them and rearrange the letters to write their own story.

Chua, the project director, delivered an acceptance speech on behalf of the group at Saturday’s award. The speech rhymed in honour of the film, which featured a rhyming narrative delivered by first-time voice actor Andrew Wheeler. “We would like you to hear us and listen closely today, to the message The Fox & The Pigeon was made to portray,” Chua’s speech concluded. “We encourage you all; don’t let cruel bullies take the glory. Stand up for yourself, be brave, and write your own story.” 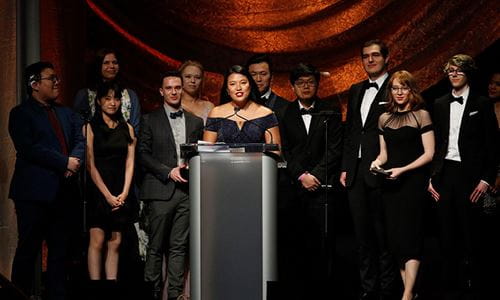 This marks the first time in Sheridan history that a group of current students has won an Annie Award. In 2016, the team of Stephanie Chiew, Joan Chung, David Du, Matthew Fazari, Ana Gomez, Rui Hao, Jessica Jing, Seeyun Lee, Nick Nason and Danny Wang was nominated for Best Student Film for their third-year group project, Mother. The Annie Award for Best Student Film that year went to Sheridan alumnus Taha Neyestani for his fourth-year film, ed, while fellow Sheridan grad Melody Wang was also nominated for her fourth-year film, The Casebook of Nips and Porkington.

“I had originally developed a story about a fox who was concerned about his ice cream, and I thought that maybe I could develop it as a fourth-year independent film,” said Thompson. “But then I realized it was probably better as a third-year group project because it was too big for me to handle by myself. And I’m glad I did.”

“This particular group distinguished themselves very early on and throughout the two semesters we were together,” added the group’s faculty mentor, Stephen Barnes, who accompanied the team to the Annie Awards along with Sheridan President and Vice Chancellor Dr. Janet Morrison. “They were able to put egos aside and really achieve a lot of consensus along the way, which is so necessary for a project like this.”

Sheridan grads also had a strong showing at this year’s Annie Awards. Dimitre Berberov (Graphic Design ’01) was part of the team to win in the category of Best FX for Feature for his work in Frozen 2. The visual effects artist has worked on a number of animated features, including Ralph Breaks the Internet, Moana and Zootopia. In addition, Sheridan alumni worked on all five films nominated for Best Feature, including category winner Klaus.

“We are thrilled to celebrate the success of our students and alumni at this year’s Annie Awards,” said Dr. Morrison. “Their achievements are yet another testament to the incredible talent that our Animation program attracts, and to our faculty’s tireless dedication to helping bring out their best.”

Last year marked the 50th anniversary of Sheridan’s animation program. Get the backstory on Sheridan's fifty years at the forefront of teaching art in motion. The program includes the Bachelor of Animation and Bachelor of Game Design, as well as post-graduate certificates in computer animation, visual effects and digital creature animation.

Learn more about OOV Studios creative process and collaboration to bring The Fox & The Pigeon to life.

Pictured above left: Sheridan animation student Michelle Chua reads her acceptance remarks at the Annie Awards in LA after her and her team won for Best Student Film. Photo by David Yeh.