Just as a bottle of wine can get better with age, Trevor Jimenez believes some stories can benefit from a bit of patience and rumination. In fact, the animator’s directorial debut, Weekends, is based on a concept he has mulled over for more than a decade. 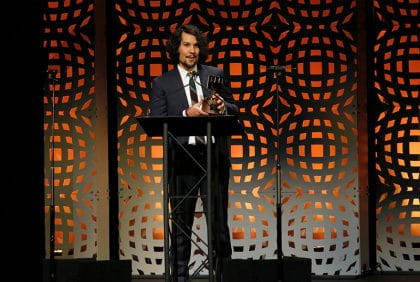 Set in Toronto in the ‘80s, the 15-minute animated short tells the story of a six-year-old boy who shuffles between the homes of his recently divorced parents. Jimenez thought of the story shortly after graduating from Sheridan’s Animation program in 2007, but it was only in 2012 that he seriously began developing the idea. In 2016, he took a year off from his full-time gig as a storyboard artist at Pixar to finish the project.

The time was well spent. Since Weekends premiered in 2017, the short, based on Jimenez’s childhood, has taken home awards from the Annecy International Animation Festival, Warsaw Film Festival and Nashville Film Festival. It was also recently awarded the Annie Award for Best Animated Short Subject and nominated for an Oscar in the Best Animated Short category.

Weekends has resonated with audiences as well as jurors. While Jimenez says he was initially anxious about creating a film based on his own family, it has received a warm reception.

“I’ve talked with a lot of people who grew up with divorced parents, and even though they may have had different experiences, they still connected with the overall feeling of the short,” he says. “I think there are basic fundamental truths that come along with being caught between two parents, and those strong emotions outweigh the specifics.”

Jimenez tried to convey those emotions through the short’s animation style. “I liked the idea of things being looser and unfinished – it felt more like childhood,” he explains. “It felt right to do something a bit more raw, because (the story) is all about new emotions and navigating uncharted territory.”

With storyboard credits including animated features The Lorax, Finding Dory and Coco under his belt, Jimenez said he felt well equipped to captain his own story for Weekends.

“I still approach stories the same way I did when I first graduated from Sheridan, but I’m a more confident storyteller now and I’ve learned a lot from the people I’ve worked with over the years,” he says. “When I get a story or scene, I look for the heart of it — what I love about it — and try to sculpt images out of those things.”

“When I get a story or scene, I look for the heart of it — what I love about it — and try to sculpt images out of those things.” – Trevor Jimenez

He was also able to take advantage of Pixar’s co-op program, which allows the studio’s artists to make films in their own time with the help of co-workers and company equipment.

“I was working during the day, then on weekends and at night I would work on my short,” Jimenez explains. “There were about 27 people who helped me make the film in various ways. I was lucky to be supported in that way.”

Jimenez has screened Weekends at festivals around the world throughout the past two years. But for now, he’s back in the office, working on an unannounced Pixar feature. He also says he has a few story ideas he may pursue in the future, including one that’s been percolating for nearly a dozen years.

“I like ideas that are open ended and challenging for the artist…ideas that force you to take your time and meditate on your own perspectives” he says. “I like to think of them like fine bottles of wine — you put them away in a cellar and sometimes they get stale, but sometimes they age well.”

“I like to think of (stories) like fine bottles of wine — you put them away in a cellar and sometimes they get stale, but sometimes they age well.” – Trevor Jimenez

Pictured at top of page: A still from Weekends by Trevor Jimenez.