When Morgan Thompson first doodled a picture of a fox holding onto a balloon and dropping an ice cream cone, she couldn’t shake the innate feeling that she was onto something.

“The whole summer, that drawing just stuck with me,” says the Oklahoma native, who had just finished her second year of Sheridan’s Honours Bachelor of Animation degree program. “So I developed a story around why this fox would be so concerned about his ice cream.”

Thompson initially considered saving the story for her fourth-year capstone project, when students independently develop an animation clip that showcases their abilities to potential employers. But the idea felt much larger than that. “By the time the summer came to an end, I decided this would probably be better as a third-year group project because it was too big for me to handle by myself,” Thompson says, then adds with a smile, “And I’m glad I did.”

So are the 10 other members of her group, each of whom helped elevate Thompson’s simple story about a fox and his ice cream into a clever six-minute film that earned one of the most coveted awards in the animation industry. The Fox & The Pigeon won the Best Student Film category at the 47th annual Annie Awards, beating out nominees from the United States, France and Germany. Sheridan President and Vice Chancellor Dr. Janet Morrison and faculty mentor Stephen Barnes accompanied the team to Los Angeles to attend the awards, which were presented on the campus of the University of California, Los Angeles (UCLA). 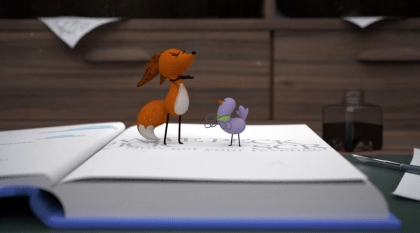 “They were able to put egos aside and really achieve a lot of consensus along the way, which is so necessary for a project like this. There was always a good energy in the room,” marvels Barnes. Adds van Tol: “With some third-year films, there will be certain people who take control of the storyboarding, then certain others who focus on the animation. That really wasn’t the case with our group. I think we all turned it into something much greater than the original idea was.”

Such as by opting to have the bulk of the story take place inside a book. Thompson’s initial pitch featured a narrator who controlled the characters, but the visuals of the fox and pigeon breaking out of the book and rearranging letters on the pages reinforced the film’s premise of writing your own story. The storybook setting also allowed the students to showcase their wide range of technical skills, some of which hadn’t even been formally taught to them yet. The Fox & The Pigeon features high-level compositing throughout the film, masterfully blending 3D models with 2D painted backgrounds and digitally hand-drawn animation. (Ivanovski, a student from Macedonia who has a musical background, even wrote and produced the score for the film.)

“They pulled off a very sophisticated use of hybridization of different media, and the way it served the circumstances of the story made it an extra bonus,” Barnes says. “It wasn’t like they did it as a novelty or for the sake of it. They saw the need to utilize these different worlds they could create, and the fact that they had the technical chops and the artistic sensibilities to pull this off to the quality level they did made it truly exceptional.”

“There are a lot of hard-working groups in our class that made really good films as well. But I feel we made a film that we hadn’t seen made by third-year students before, the way we mixed technologies and mediums,” says Walton. Van Tol adds, “It wasn’t so much wanting to one-up everyone or do the best film compared to everyone else as it was a learning venture. Our faculty tries to push you in third and fourth year, encouraging you to do something that you’ll personally enjoy and learn from. We just happened to pick something we could achieve. It was a really high level, but it was achievable.”

“Art is not a field that a lot of people typically go for, and it’s definitely not something that you think of as a career path when you’re a kid. So to see a film that we worked on actually being recognized, I think we all feel we could definitely go somewhere with this.” – Michelle Chua

It also required the students to keep an open mind to all possibilities. Van Tol remembers resisting Pacana’s suggestion that the narration should rhyme, largely because that wasn’t how van Tol remembered the storybooks she read as a child. But when Pacana came in one day with a script that rhymed throughout, the group quickly fell in love with it. “I’m so glad he was the proactive one,” says van Tol, pointing out the value of providing physical evidence to support an outside-the-box idea. Walton agrees. “People would talk about an idea of doing something, and in my head, I would say ‘No way,’” he recalls. “And then they’d come in the next week with an example of how it would work, and I’d say, ‘Yes, that’s definitely how it should be.’”

Whenever things did start to veer off course, Barnes helped the team regain its focus. “Stephen encouraged us to think of a premise so that if we ever got lost in the telling of our story, we could return to that premise to be reminded of what the core of our idea was. Once we realized our whole story was pointing towards self-empowerment, it helped us get rid of the moments that weren’t working in service of that premise,” says van Tol, adding that professors Tony Tarantini and Jim Caswell were other valuable influencers to the group.

Accolades are a bonus

Seeing their film quickly receive so much critical acclaim (in addition to the Annie Award nomination, The Fox & The Pigeon received an Honourable Mention for Best Canadian Student Animation at the Ottawa International Animation Festival) has been a surreal experience for the students. “We knew it was good. We could all see that. But to imagine that it would be taking us to Los Angeles… yeah, that’s something else,” says van Tol. Chua, the group’s project director, sees the accolades as a bonus. “We essentially wanted to make a good film, and if it was good, we’d enter it into festivals and see what we got. And it just happens that we’ve gotten a lot of attention.”

“…I feel we made a film that we hadn’t seen made by third-year students before, the way we mixed technologies and mediums.” – Matt Walton

That attention also validates the decision that the students — many of whom reside outside of the province, the country and even the continent — made to come to Sheridan to pursue Animation as a career. “Art is not a field that a lot of people typically go for, and it’s definitely not something that you think of as a career path when you’re a kid. So to see a film that we worked on actually being recognized, I think we all feel we could definitely go somewhere with this,” Chua says.

It reminds Walton of how he felt in 2015, when Sheridan students accounted for three of the seven Annie Award nominees in the Best Student Film category. “I had just found out I’d been accepted into the Honours Bachelor of Animation program and I thought, ‘They set the bar so high! How are we expected to leave a mark like that?’” says Walton. “I just feel so lucky to be part of a group in which we know we’ve done something that’s at least comparable. It’s a full-circle moment for me.”

Pictured at top of page: A still from the Sheridan Animation students’ Annie-nominated short film The Fox & The Pigeon.