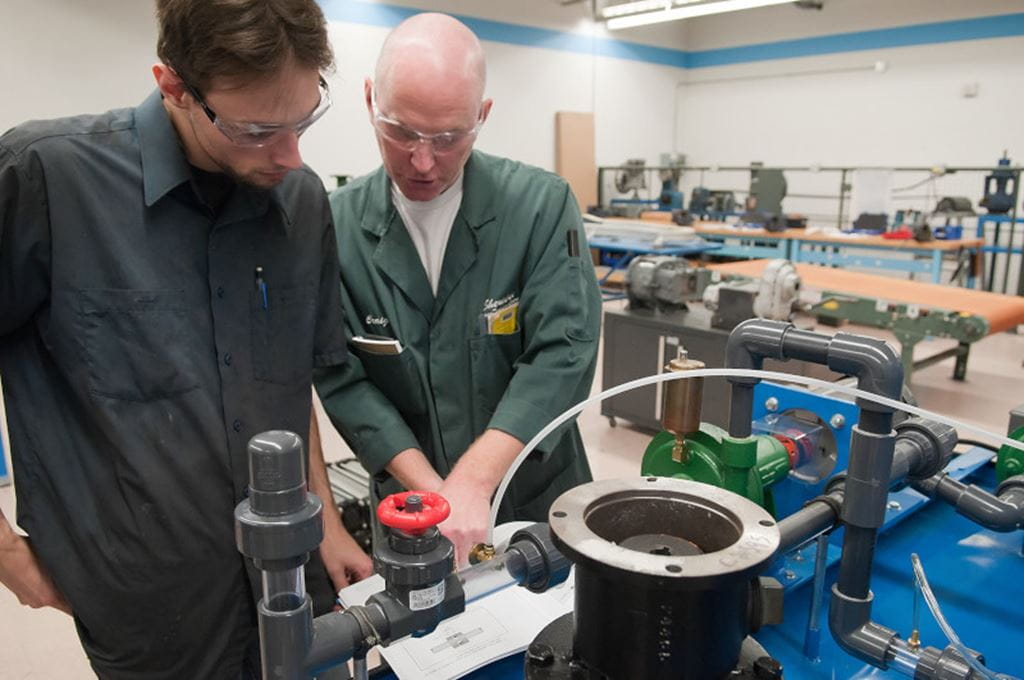 Why are industrial mechanics known as the ‘doctors of industry’?

This month, nine of the world’s top young millwrights will visit Sheridan’s Magna Skilled Trades Centre to compete for an Industrial Mechanics title in the WorldSkills Competition Special Edition. The Oct. 18-20 event will mark just the third time that a discipline in WorldSkills — the largest and most influential skills competition in the world — is contested on Canadian soil.

In this installment of Take 5, Industrial Mechanic Millwright coordinator and WorldSkills official Craig Brazil discusses the field of Industrial Mechanics, the format of the WorldSkills competition, the significance of Sheridan hosting this event on behalf of Skills Canada and what the future holds for millwrights.

1. What is Industrial Mechanics?

The best way to define Industrial Mechanics would be to call us the doctors of industry.

I love this trade because no two days are ever the same. You might be working on a gear box one minute, then have to fix an assembly line the next — whatever it takes to make sure equipment keeps running so that goods can go out the back door, onto the truck and into stores, pharmacies, hospitals or wherever else they have to go. The breadth of industry we are involved in connects us to everyone on the planet. The shoes and clothes you wear, the food you eat, the vehicles you drive... all of them have had industrial mechanics involved somewhere along the line.

2. You led the charge for Industrial Mechanics to be added to WorldSkills in 2015. What was involved in that process, and why was it so important to you?

Having Industrial Mechanics added to WorldSkills was a long and arduous road that began all the way back in 2011. There were initial concerns that there wasn’t enough interest in Industrial Mechanics around the world, but I and three other national technical committee members knew every country has industrial mechanics and felt it would be a viable event.

In 2012, we created a pitch that Skills Canada posted on the WorldSkills website, and five countries showed initial interest in having Industrial Mechanics included as a demonstration competition. A colleague and I then pitched the idea in front of 75 technical delegates from around the world at WorldSkills Leipzig 2013 in Germany, and seven countries ended up expressing interest by the following spring. Five was the minimum threshold to have a new event added as a demonstration competition, so we were in. It became an official event in 2017, when we had nine competitors, and the field grew to 11 for 2019, then to 16 before WorldSkills Shanghai 2022 was canceled due to pandemic concerns.

“The gumption to step inside the ropes and compete in something like this — no one can ever take that off your resume.”

For me, having Industrial Mechanics included in WorldSkills was a personal journey. When I was a 19-year-old apprentice in Ireland, I was invited to a national fitting competition in Dublin but didn’t give it a second thought until my boss heard about it and insisted that I participate. I wasn’t mature enough to understand what a great opportunity it was. Now, whenever we invite our students to participate in local or provincial or national competitions, I encourage them to embrace the opportunity with open arms and run with it regardless of the outcome. The gumption to step inside the ropes and compete in something like this — no one can ever take that off your resume.

3. How will the Industrial Mechanics event be contested at this year’s WorldSkills Special Edition?

Over a three-day span, competitors will have 18 hours to complete four modules that present specific challenges related to their trade.

They know in advance that these modules will involve welding, fabrication, layout and mechanical assembly, and they know some of the parameters they’ll be working with. For example, when it comes to welding, they know the machine they’ll be using, the diameter of the wire, the wall thickness of the tubing and the type of gas they’ll be welding with. But they have no idea what the actual project is, which simulates real-world challenges of being presented with a problem and having to fix it.

“When you step across the line and go inside the ropes, everything ramps up exponentially... This is the WorldSkills — the Olympic Games or Stanley Cup Final or Super Bowl of skilled trades and vocational competitions around the world.”

This will be quite grueling, mentally as well as physically. Training is wonderful, but when you step across the line and go inside the ropes, everything ramps up exponentially. Working in front of spectators adds a completely different dynamic, plus this is the WorldSkills — the Olympic Games or Stanley Cup Final or Super Bowl of skilled trades and vocational competitions around the world. Usually, the competitors who can brush off the occasional bad moments and remain steady are the ones who are the most successful.

4. Why was Sheridan selected to host this event, and why is it so significant?

When WorldSkills decided to hold a Special Edition this year in which all WorldSkills members could apply to host an event, I immediately raised my hand. I have seen many facilities around the world during my travels for various competitions, and what we have here at the Magna Skilled Trades Centre — not only in our Industrial Mechanics lab but also in our machine shop, electrical department, welding lab and plumbing lab — is on the mark with what is going on in the world today.

For WorldSkills to agree that this was the place to host the Industrial Mechanics competition on behalf of Skills Canada is a huge, huge feather in our cap.

5. What do the next five years hold for the field of Industrial Mechanics?

From a skillset perspective, an understanding of new technologies is tremendously important. The turbines that power the lights in our homes and on our streets run at the speed of sound, 24 hours a day, seven days a week, 365 days a year, and the tolerances of those shafts running in line is a third of the thickness of a hair on your head. The skilled workers who align those shafts have gone from using dial indicators, which are very accurate, to laser alignment, which allows the process to be done at a faster rate. But you still have to understand the theoretical nuances of how these things need to move in relation with each other.

Industrial mechanics have always played a critical role in the skilled trades, always needed in facilities, but no one knew who we were. That’s changed during the pandemic, which has wreaked havoc on the global supply chain and seems to have brought us to the front of the line. When I look at the number of apprentices and postsecondary students we have in the trades, I’ve never seen anything like it in the time I’ve been at Sheridan. When you look at job opportunities in the newspapers or online, it’s millwrighters, millwrighters, millwrighters. They can’t find enough of them. It’s staggering.

Craig Brazil is coordinator of the Industrial Mechanic Millwright pre-apprenticeship and apprenticeship programs at Sheridan, where he has been a professor since 2001. Craig also played a leading role in WorldSkills’ addition of the Industrial Mechanic (IM) discipline, serving as Canada’s chief expert since 2015 and becoming the event’s skills competition manager in 2017. Prior to teaching at Sheridan, Craig worked as an Industrial Mechanic Millwright in the aircraft industry in Ireland, then as an IM instructor and general manager at the Magna Technical Training Centre in Brampton. He received his Diploma in Technical Education and Ontario Teacher’s Certificate from the University of Toronto in 1991.