Sheridan graduate Michelle John, a Fire/Life Safety Education Officer at the City of Brampton, has received the Premier’s Award for Community Services for her passionate commitment to the  safety of Brampton’s residents. 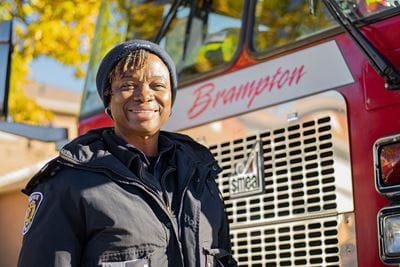 John, a 1990 graduate of Sheridan’s Legal Office Administration program, received the award at a virtual ceremony on Thursday. The Premier’s Awards honour the important social and economic contributions that college graduates make to Ontario and the world, and are administered by Colleges Ontario.

“When I got accepted at Sheridan as a student, I never thought there’d be a day when I’d receive an award in recognition of my work,” a delighted John said upon receiving the honour. She also had a powerful message for the community.

“I hope this award inspires women of colour to see the value in working hard and the value in investing in themselves through college education. I’d like people in my community to see that anything is possible and they’re not limited because of the colour of their skin,” she said.
An immigrant from Trinidad & Tobago and a single mother of three, John is a profile in courage. She joined Brampton Fire Service as an administrative assistant, and worked toward her current position, taking diploma and certificate courses to expand her knowledge of fire safety and prevention while working full-time. She has been educating Brampton’s community in fire safety for the last 10 years.

“We're so proud of Michelle’s commitment to the community and the life-saving work that she does,” says Dr. Janet Morrison, Sheridan’s President and Vice Chancellor. “She is an incredible role model for our students and graduates. Her resilience and determination are deeply inspiring, and her career success is an important reminder of what's possible when people stay focused on realizing their goals.”

John is the 18th Sheridan graduate to receive a Premier’s Award since the celebration’s inception 29 years ago. Other notable alumni to receive the award include  award winning animators, a bestselling author and illustrator, and an Emmy-award winning casting director. Colleges Ontario launched the Premier’s Awards in 1992 to mark the 25th anniversary of Ontario’s colleges. They are presented in seven categories: Apprenticeship, Business, Community Services, Creative Arts and Design, Health Sciences, Recent Graduate, and Technology. Sheridan’s other nominees this year were:

“Congratulations to all of our nominated alumni,” says Morrison. “Each of them demonstrates the excellence and impact our alumni have in a wide breadth of sectors across our community.”