Sep 13, 2021
Sheridan graduate Craig Henighan has won an Emmy in the category of Outstanding Sound Editing for a Comedy or Drama Series and Animation for his work on Love, Death + Robots. 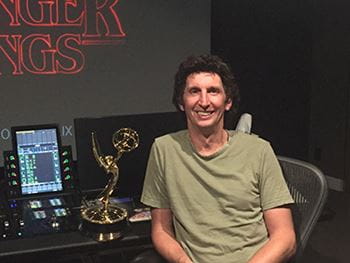 The Emmy, presented on September 12 during The Creative Arts Emmy Awards ceremony, is the fourth for the 1995 Media Arts alumnus. He won in 2017, 2018 and 2020 for Sound Editing on the Netflix thriller Stranger Things. He’s also worked on dozens of feature films throughout his career, including the critically acclaimed Black Swan, Deadpool, 13th, and Hidden Figures. In 2019, he was nominated for an Oscar for his work on Roma.

“Our graduates make important contributions to the media and entertainment industries around the world,” says Sheridan President and Vice-Chancellor, Dr. Janet Morrison. “I’m delighted to see Craig recognized with the highest accolade in his industry for the fourth time. It’s an amazing achievement, and one that can inspire everyone in our Sheridan community to continue to strive for their goals.”

This year, Henighan was one of three graduates to receive an Emmy nod. Sheridan’s award-winning alumni from the Faculty of Animation, Arts and Design have a long history of success at the Emmys and in other top awards competitions including the Oscars and Canadian Screen Awards.