Sheridan alumni from the Faculty of Animation, Arts & Design are vying for the prestigious Primetime Emmy Awards this year for their outstanding talent and creativity in television production. 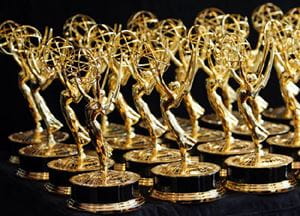 Craig Henighan (Media Arts ’95), Wendy Hallam Martin (Media Arts ’87), and Kieran McKay (Computer Animation ’09) were nominated for the awards in a virtual ceremony on July 13. The Emmys will be presented later this year on September 19.

An Oscar nominee and winner of Primetime Emmys in 2020, 2018 and 2017, Henighan has been nominated as part of a team in the category of Outstanding Sound Editing for a Comedy or Drama Series (Half-Hour) and Animation for the anthology, Love, Death + Robot.

Henighan has worked on dozens of feature films, including critically acclaimed Black Swan, Deadpool, 13th, and Hidden Figures. In 2019, he received an Oscar nomination for his work on Roma.

Hallam Martin, who won a Primetime Emmy in 2018 and was a nominee in 2019, is once again in the running for the award in the category of Outstanding Single-Camera Picture Editing for a Drama Series, for her work in The Handmaid's Tale. In addition to her 2018 Emmy win, Hallam Martin has won multiple awards for her work on The Handmaid’s Tale, including the Canadian Cinema Editors Award, the American Cinema Editors Award and the Directors Guild of Canada Award. She’s also celebrated for her work on Queer as Folk, The Tudors and The Borgias.

McKay has been nominated in the category of Outstanding Special Visual Effects in a Single Episode for his work on Vikings as Lead Animator. A winner of multiple Canadian Screen Awards, three of those consecutively from 2018-20, McKay was earlier nominated for an Emmy in 2017.

“We are extremely proud of Craig, Wendy and Kieran. I am thrilled that their creativity, hard work and excellence are getting recognized by the best in industry. Their work puts Canada’s media industry on the map and inspires our students to chart their own paths and believe that the highest pinnacle of success is achievable,” says Dr. Janet Morrison, Sheridan’s President and Vice Chancellor.

Also nominated for an Emmy is Eric Lambert, who attended Sheridan. He earned a nod for Outstanding Picture Editing for a Structured Reality or Competition Program for his work on Top Chef.

Sheridan’s award-winning alumni from the Faculty of Animation, Arts and Design have a long history of success at the Emmys and in other top awards competitions including the Oscars and Canadian Screen Awards, recognition that inspires our learners and the broader community.

Sheridan releases Winter 2022 plans, with over 80% of programs offering option for in-person learning

New and returning Sheridan students have been notified of their program modes of delivery for the Winter 2022 term. Sheridan is set to welcome back highest number of in-person learners since the start of the global pandemic.

Sheridan's Mission Zero team and Oakvillegreen partnered together to convert an unused area of asphalt into a naturalized garden at Trafalgar Road Campus.