“I was so impressed with him,” Dr. Morrison recalls of the campus tour Dhoot — then a second-year student working as a Student Admissions Representative — gave her when she became Sheridan’s Provost and Vice President, Academic in 2016. “He provided a tour that wasn’t just physical in nature. Yes, we toured the space, but I was equally impressed by the commentary he provided about the Sheridan he’d really come to embrace. He talked openly and honestly and frankly about what his own lived experience had been and how it impacted his learning.”

That self-awareness is something that Dhoot once struggled to find. In 2013, despite being groomed for university studies throughout middle school and high school as a member of the prestigious International Baccalaureate (IB) program, Dhoot was placed on Failed Standing following two years of Microbiology studies at the University of British Columbia Okanagan. As he digested the news, the Brampton native thought he may be finished with post-secondary education altogether.

“When I started (university), I knew in my heart that I probably wouldn’t graduate from there. Being one of 200 students in a lecture hall, not building connections with classmates and instructors, it just didn’t work for me.” – Parmin Dhoot

“When I started at UBC, I knew in my heart that I probably wouldn’t graduate from there. Being one of 200 students in a lecture hall, not building connections with classmates and instructors, it just didn’t work for me,” says Dhoot, who cites social pressures and ego as motivating factors in his decision to study science in university. “I started to question myself, and I really wasn’t sure what I wanted to do with my life.”

After returning home and “doing nothing” for one year, Dhoot began to rediscover his sense of purpose. Being baptized into the Sikh religion helped restore his confidence, and he enrolled in Sheridan’s Pilon School of Business (PSB) after learning from an acquaintance that the college had begun offering business degrees.

Fast-forward to today, and Dhoot not only holds a bachelor’s degree in Business Administration (BBA) specializing in Supply Chain; he’s been accepted into the University of Calgary’s Master of Education, Interdisciplinary route.

Capitalized on opportunities inside and outside the classroom

Dhoot, who first enrolled in the BBA Accounting stream before transferring to Supply Chain in his third year, points to intimate and engaging learning environments as key to his academic success at Sheridan. “Smaller class sizes meant instructors had the opportunity to make connections with every student,” he says, “and we could forge relationships with many of our classmates.” 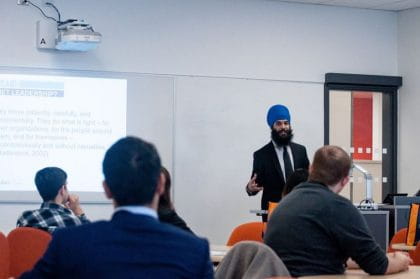 However, it was outside the classroom where Dhoot made his biggest strides. Learning from his experience at UBC, he made it a point to take advantage of student support services, get involved in extra-curricular activities and pursue on-campus employment opportunities. In his first semester, Dhoot consulted with his program’s adviser to build a timetable that fit his personal schedule and interests. In his second, he volunteered to assist with orientation and met a student council representative who recommended he join the Sheridan Accounting Student Association. Within a week, he was on the SASA’s executive team, and by the fall, he’d become its president.

In second year, Dhoot also served as a Student Admissions Representative (leading to that first interaction with Dr. Morrison) and as internal chair of the BBA Student Council. The following year, he served as student representative on Sheridan’s Board of Governors and worked as a Peer Mentor Leader. And in his fourth, he was one of three students to assist now-PSB Dean Dr. Anne-Liisa Longmore on a lengthy research project that explored leadership and transformative learning.

“It was a snowball effect. Opportunities were there for the taking, especially within my program, and I felt I was mature enough to take advantage,” says Dhoot, currently in his second contract as a Student Success Officer at Sheridan. “It takes leaders to recognize leadership qualities in others, and I think people in PSB and Student Affairs and Recruitment gave me opportunities because they felt I could handle them and thrive in them.”

Dhoot’s education in Supply Chain, a field that ensures the effective flow and production of goods and services, has already come in handy. “I think it’s a skillset that is translatable across different industries. Even when I’ve been working in Student Advisement, I’ve looked at our processes to try to find ways to make things more effective and efficient,” Dhoot says. He assisted with last year’s development of Sheridan’s Campus Master Plan, bringing the unique perspective on campus operations he gained during his BBA internship as a Special Projects & Administration Associate for Campus Safety, Parking and Facilities Services.

But ultimately, it’s Education — not Microbiology, not Accounting and not Supply Chain — in which Dhoot has finally discovered his passion and potential. And that discovery might not have happened had he not gone outside his comfort zone, explored extra-curricular opportunities and made valuable connections during his time at Sheridan.

“Parmin represents post-secondary education at its best: a bit of this, a bit of that, some positive experiences, some negative, some supportive, some challenging. The entire package informed who he is now and who he will become.” – Sheridan President Dr. Janet Morrison

“Parmin’s journey crystallizes the notion of our whole learner philosophy,” says Dr. Morrison. “He developed as a human being through the course of all of his experiences. UBC taught him who he was, and maybe who he wasn’t. You learn a lot from failure, and that experience, combined with coming to Sheridan and being more mature and having the in-class component and the out-of-class student experience and the leadership experience, propelled his development. Parmin represents post-secondary education at its best: a bit of this, a bit of that, some positive experiences, some negative, some supportive, some challenging. The entire package informed who he is now and who he will become.”

That next step is the master’s degree program at the University of Calgary, which Dr. Longmore also attended, and where his first topic of remote study this fall will be Workplace and Learning in Diverse Contexts.

“While I believe that the Master of Education, Interdisciplinary route is a very good fit for Parmin, I also believe he’s a great fit for that program. He’ll really contribute to the community at University of Calgary because of who he is and how he’s developed and grown as a learner, which speaks to the strengths of our BBA program,” notes Dr. Longmore. “It demonstrates the competencies he’s cultivated as a result of his work and learning in our program: critical thinking, collaboration, teamwork, research skills, creativity, agility — all of which are expected in master’s level studies.”

“I’d never have thought I could do something like this with a business degree from Sheridan,” Dhoot adds. “I took IB courses to get into top universities, and I once thought college was just for people who took applied-level courses. But now I’m getting into a master’s program with a Sheridan degree, which to me validates everything. I feel like Sheridan has made it in terms of the level of their degrees.”