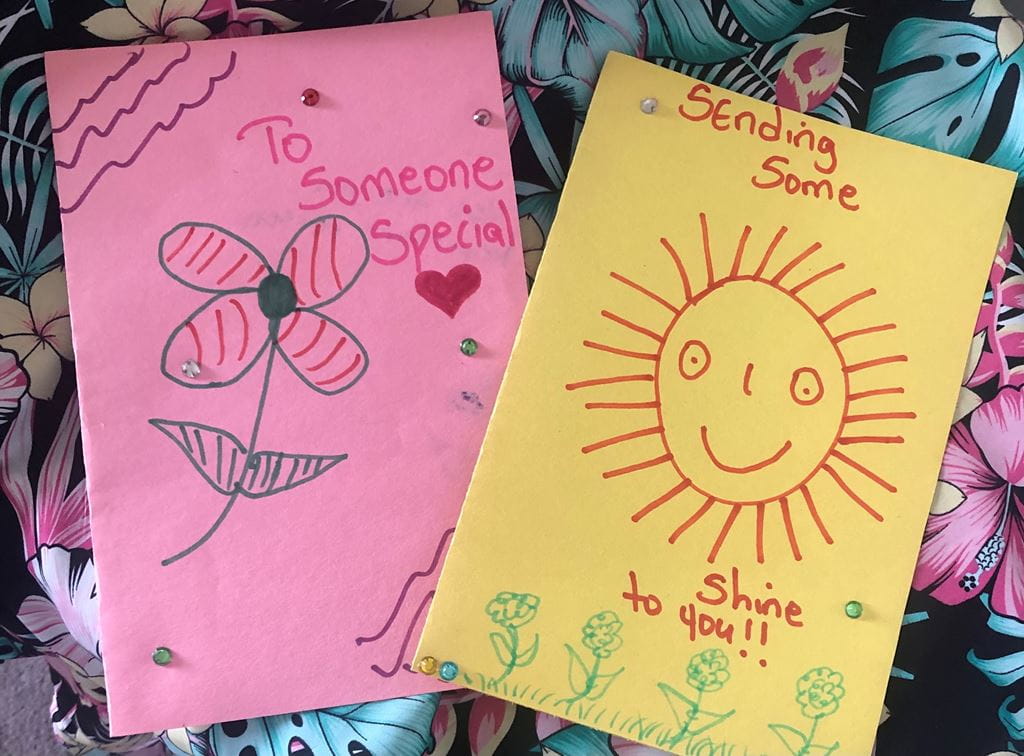 Sending letters of encouragement and hope

by Jon Kuiperij – Oct 4, 2021
Krishna Joseph has long understood how a letter can buoy an elderly person’s spirits.

“My mom had me later in life, so I’ve seen the needs of older adults and how much she appreciated having someone to talk to who didn’t judge her, and who showed her empathy,” says Joseph, who emigrated from Saint Lucia at the age of 16.

“After I moved to Canada, I started writing letters to my mom, and she always looked forward to receiving them. They made a really big difference to her.”

Sadly, they can no longer be sent to her mother, who passed away four years ago. But Joseph has continued that practice of writing to older adults, spending much of her second-year virtual field placement in Sheridan’s Social Service Worker — Gerontology diploma program crafting colourful and handwritten messages to isolated older adults who might be struggling during the COVID-19 pandemic. “My mom raised me to always care and support others,” Joseph says. “If she was still here, I know she’d be very proud.”

The first letters Joseph wrote during her practicum were as a volunteer with Letters Against Isolation, an organization that sends handwritten letters to residents of assisted living facilities and care homes throughout Canada, the United States, Australia and Israel. She then created her own project, Krishna’s Motivation Letters Against Isolation of Older Adults, to make connections with her local community in Barrie.

Joseph operated her letter-writing campaign at her own expense, with support from Sheridan’s Innovation Field Placement Bursary that awarded up to $1,200 to students participating in unpaid field placements. Classmate Melanie Ann Johnston also participated in the project, as did students across multiple grades at Barrie’s St. Nicholas Catholic School who sent hundreds of cards and letters to nearby long-term care home Roberta Place this past spring.

Taking older adults back in time

“I wanted to take these older adults back to a time when letters were handwritten and were a keepsake,” says Joseph, a mother of two who came to Sheridan in her early 30s to pursue her passion for elder care.

"In my letters, I’d ask them how they were doing, tell them a little bit about myself, and include some motivational quotes and words to lift their spirits. Even if they couldn’t go outside, I’d suggest they open the window so they could feel the breeze coming in. I just wanted to send out some sunshine and hope.”

Joseph found many ways to do that throughout her practicum, which also included creating videos for Art Your Service, an organization that provides virtual classes and social programs for people age 55 and older, and working with Seniors Forum Canada, an organization by seniors for seniors to improve quality of life, reduce social isolation and promote active aging.

“We have had to find virtual practicum options during the pandemic because our students couldn’t go into the long-term care and retirement homes the way they always have. We gave our second-year students a menu of things that would help them achieve their necessary learning outcomes, but we also told them they could do something else if they wanted to take things further and go in a direction they were inspired by,” says SSW – Gerontology professor Alexa Roggeveen.

“Krishna really jumped in with both feet. She has an extremely strong commitment to helping whoever she can in her community, especially older adults. When she saw a need, she wanted to meet that need.”

Combatting ageism by bridging the gap

By getting students at St. Nicholas to contribute to Krishna’s Motivation Letters Against Isolation of Older Adults, Joseph tackled another issue — the generational gap between youth and the elderly.

“Many young people don’t have older adults in their lives, and the negative perceptions they can develop without contact with seniors can be significant,” Roggeveen notes. “Krishna helped combat ageism by creating these connections.”

“It was a nice opportunity to do something positive during such a challenging time. Our students enjoyed themselves and felt good about reaching out,” adds former St. Nicholas principal Christine Toth. “As someone who has a mother who is alone and elderly, I know that you might not really understand the loneliness that these people are feeling until you see it firsthand. It would be nice if the school is able to do something like this again.”

St. Nicholas and other schools may have that opportunity. Joseph intends to continue running Krishna’s Motivation Letters Against Isolation of Older Adults, even though her placement has concluded.

“I’ve heard how these older adults look forward to receiving my letters, and how they put big smiles on their faces,” says Joseph. “I know that my letters are making a difference.”

Krishna Joseph was one of 371 students from across 21 different Sheridan programs who received an Innovative Field Placement Bursary in the Winter 2021 term. Hundreds of students applied for a bursary, outlining their positive placement experiences and describing their unique and innovative experiences in their application. This bursary program was funded in part by the Government of Canada’s Innovative Work-Integrated Learning Initiative (IWIL) and Co-operative Education, Work-Integrated Learning (CEWIL) Canada’s Innovation Hub (iHUB), and Sheridan College.